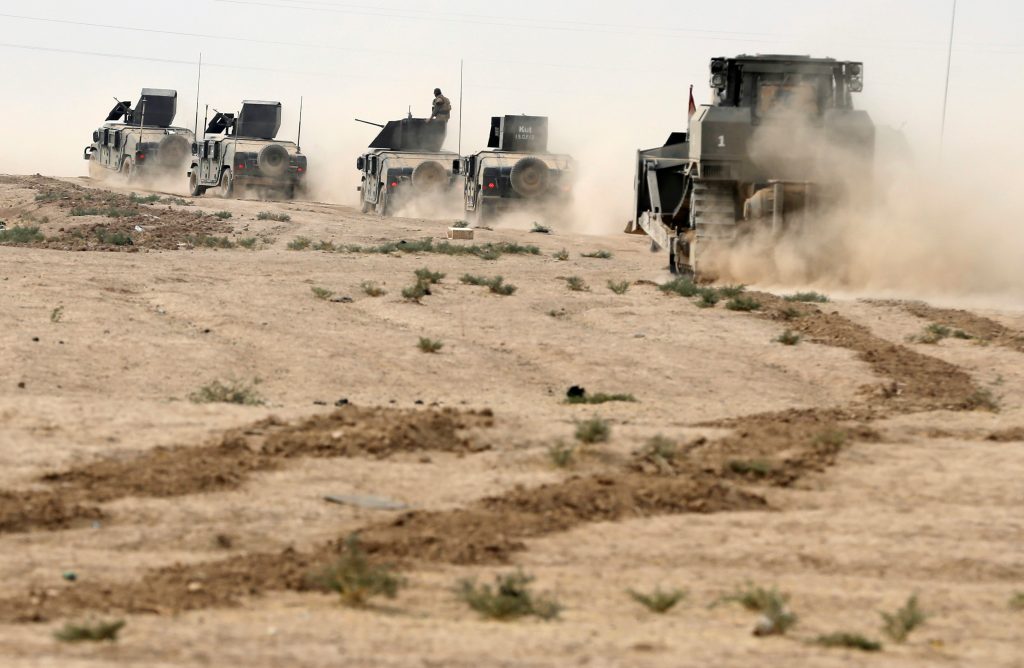 Iraqi forces, backed by U.S.-led coalition airstrikes, battled Islamic State terrorists for a third day on Tuesday in a remote western town, hundreds of miles to the south of the operation to retake Mosul, U.S. and Iraqi officials said.

The clashes under way in Rutba, in Iraq’s western Anbar province, are apparently part of the terrorist group’s tactics to divert attention — as well as Iraqi and coalition resources — from the battle to retake Mosul from Islamic State terrorists.

“Fighting is ongoing in Rutba, which is still contested,” said Col. John Dorrian, a spokesman for the U.S.-led coalition.

“The coalition continues conducting strikes to support the Iraqi security forces’ response efforts, including one against a Daesh convoy that was attempting to flee the area,” he added, referring to IS by an Arabic acronym.

Brig. Gen. Yahya Rasool, an Iraqi military spokesman, said the situation was under control and there were no IS terrorists in the town. But Rajeh Barakat, an Anbar provincial councilman who sits on the security committee, said IS terrorists were still clashing with security forces in two southern neighborhoods of Rutba.

“The clashes are still ongoing,” he said. “We have reports saying the militants killed some civilians and members of the security forces, but we don’t know how many.”

IS launched a complex attack on Rutba on Sunday, almost a week into the operation in Mosul, where U.S.-backed Iraqi forces are waging a wide-scale offensive to drive the terrorists from Iraq’s second-largest city.

Last week IS launched a similar assault in and around the northern city of Kirkuk, some 100 miles southeast of Mosul. The wide-ranging assault ignited gun battles that lasted two days, killing at least 80 people.

Near Mosul, the fighting was still under way on Tuesday in a belt of villages and towns to the north, east and south of the city. Maj. Gen. Haider Fadhil said the Iraqi special forces had reached a village located four miles from the eastern edge of Mosul.

The U.S.-led coalition said it carried out several airstrikes in support of the Mosul operation, including five on Monday that destroyed 22 fighting positions, eight tunnels and nine vehicles, one of which was rigged with explosives.

The U.S. is also providing ground support for the Mosul operation, with more than 100 American soldiers embedded with Iraqi units and hundreds more working in staging bases. A U.S. soldier was killed by a roadside bomb last week.