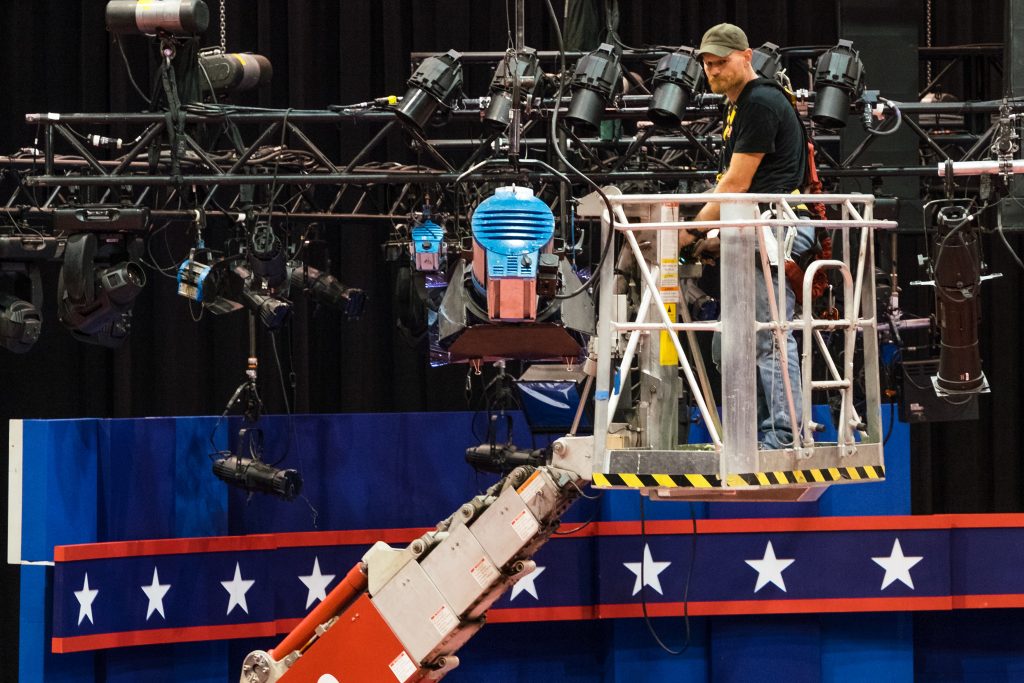 Donald Trump needs to prove to voters that he has the policy depth and gravitas to serve as commander in chief. Hillary Clinton needs a moment to connect with Americans who question whether she can be trusted.

In an election year that has upended political convention, the candidates’ best opportunity to conquer their weaknesses will come in the most traditional of campaign forums: Monday’s 90-minute, prime-time debate.

Both campaigns expect a record-setting media audience for the high-stakes showdown, which could help tip the balance in a tight White House race.

The visuals alone will be striking as the candidates step behind their podiums at Hofstra University in suburban New York. Clinton will be the first woman to take the stage in a presidential general election debate. Trump has spent years on Americans’ television screens as a reality show host, but it can still be jarring to see him at politics’ upper echelons.

Six weeks from Election Day, and with advance voting already underway, the opening debate is one of the few opportunities left for the candidates to motivate supporters and sway a narrow band of undecided voters. According to a new Associated Press-Gfk poll, more than 85 percent of likely voters backing Clinton or Trump say their minds are completely made up. About 13 percent said they were undecided.

The candidates’ preparation has been a microcosm of their sharply different approaches to politics and, presumably, the presidency.

The Democratic nominee has spent weeks with advisers, taking full days away from campaign travel to pore through briefing books, practicing to pounce if Trump makes false statements and steeling herself for the possibility that he may level deeply personal attacks.

Longtime Clinton aide Philippe Reines is playing Trump in mock debates, according to a person familiar with the preparations who was not authorized to discuss the matter publicly and insisted on anonymity. Reines is a combative political operative who is deeply loyal to Clinton.

Former President Bill Clinton has sat in on some sessions, offering advice from his own White House debates.

The Republican businessman’s loose approach is potentially risky given that he is new to many policy issues expected to come up during the debate. But advisers contend he will compensate by being quick on his feet and point to his experience at performing under pressure.

Clinton aides fear Trump will indeed be judged more for his performance than his grasp of the numerous challenges that pass across a president’s desk. They’ve been flummoxed by Trump’s ability to sail through the campaign without fleshing out many policy positions and glossing over past statements that he no longer views as politically palatable.

On Friday, the Clinton campaign released 19 pages of what they called Trump’s “seven deadly lies,” including his false assertion that he opposed the Iraq war from the start.

“Even if he meets some kind of lowered bar of being semi-coherent and not having any outbursts, it’s hard to imagine he’ll avoid his own propensity for lying,” said Brian Fallon, Clinton’s campaign spokesman.

Asked whether Clinton herself planned to call Trump out in the debate if he tries to lie about his past statements, Fallon said, “I don’t think she would let anything like that pass.”

People familiar with Clinton’s preparations say she has been working through answers to questions that hit at her lack of trustworthiness in the eyes of many Americans, a problem that has dogged her throughout the campaign. Supporters cringed during a candidate forum earlier this month when Clinton was pressed about her e-mail use at the State Department and became defensive, rather than apologizing and trying to move on quickly.

Clinton has debated more than 30 times at the presidential level, including several one-on-one debates with Barack Obama in 2008 and Vermont Sen. Bernie Sanders in 2016. But this will be her first presidential debate against a candidate from an opposing party, which Democrats say will give her far more latitude in drawing a contrast and defending herself.

“It’s a lot more comfortable running against people in the other party than it is debating in the primary,” said Anita Dunn, who worked on debate preparations with Obama. “The differences don’t have to be manufactured. The differences exist.”

Trump had an uneven record during the Republican debates, sometimes controlling the crowded contests and other times fading into the background. He flipped back and forth between being bombastic and trying to act restrained.