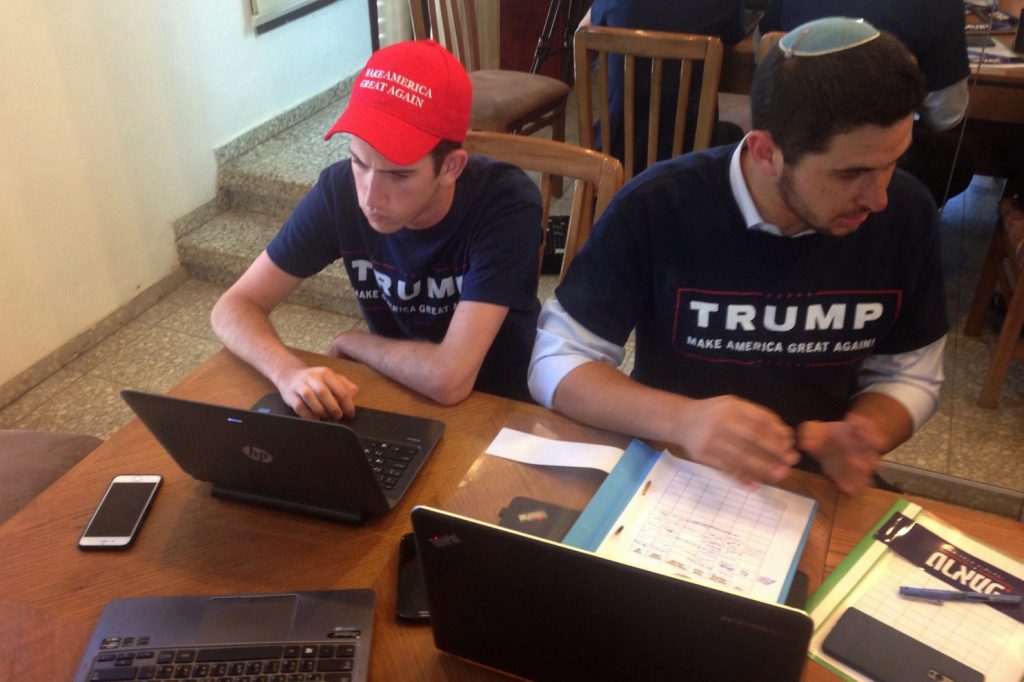 The Rabbi hadn’t voted in a U.S. election in 25 years. “Didn’t see the point,” he said. Now Chaim Spring said he was all in for Republican nominee Donald Trump.

The 80-year-old, whose sunny villa in a Jewish settlement was lined with religious tomes, described himself to reporters as “a big Trump supporter”.

He pronounced Trump “good for America and good for Israel.” The Rabbi especially admired the Trump family vibe. “You can tell he really loves his children,” Spring told The Washington Post. “That says a lot.”

Spring was born in New York and moved to Israel more than 40 years ago. As a U.S. citizen, he is eligible to register and vote.

GOP activists in Israel say there are a lot more voters here like the Rabbi — as many as 400,000 U.S. citizens living in Israel today.

Nobody knows the exact number, not even the U.S. Consulate in Yerushalayim, which declined to give an estimate. U.S. citizens are free to come and go, to and from, Israel and many other countries without a visa, and many do not register with their local embassies.

A group named I Vote Israel says there are 200,000 possible voters. “We have the same influence on this upcoming election as numerous states in the union,” the organization states. “That’s really something.”

Democrats here say the total number is likely less — but still a lot.

Polling experts say there may be enough American voters in Israel to matter in a tight race, especially in a swing state such as Florida, which is exactly where the Israeli Republicans are laser-beaming their focus.

Working off lists, several hundred GOP activists in Israel are phoning potential voters and knocking on doors, telling them their votes count.

Their pitch: Remember the 2000 race between Al Gore and George W. Bush, which came down to 537 votes in Florida?

Much of the 2000 recount action was centered in Palm Beach County, with its notorious “butterfly ballot.” Palm Beach also has one of the largest Jewish populations in the United States.

Last week, the Rabbi’s house became the fifth campaign office for the group Republicans Overseas Israel, as well as the first Trump headquarters in a Jewish settlement in Yehudah and Shomron. There was a big banner in the driveway in Hebrew that read “Trump: In Israel’s Interest.”

The Israeli Republicans declined to say how much they are spending or who their top donors are.

At a news conference, an organizer for the Republican effort, Tzvika Brot, said the decision to open an office in Karnei Shomron did not signal an appeal to supporters of Jewish settlements. Standing beside him, Marc Zell, co-chairman of Republicans Abroad, said, “That’s not entirely true.” He also said he preferred not to call them “settlements” and disagreed that the Israeli army “occupied” Yehudah and Shomron.

Zell said it was very symbolic that the GOP was here.

There are about 400,000 Jews living in more than 200 communities in the Yehudah and Shomron, and as many as 15 percent of them are dual U.S.-Israeli citizens, according to researchers.

The settlements are on the land that many Jews say is their Biblical and historical home. It is also land the Palestinians want for a future state. The international community calls the Jewish settlements “illegal”; the United States considers them “illegitimate” and “an obstacle to peace.” Israel disputes this.

Zell praised the Republican Party and Trump for endorsing a plank at the convention that gave full-throated endorsement to Israel.

“The platform eliminated any reference to Israel as an occupier,” Zell said. “That wasn’t just a play on words; that was a real statement that coincides with Donald Trump’s own statements recently that when it comes to building homes and synagogues and schools for Arabs and Jews in Judea and Samaria, this is an issue for the Israeli government to decide.”

Zell, who lives in a Jewish settlement, said he has eight children, now all adults, and all registered to vote and ready to mail in their ballots for Trump.

Earlier this month, Trump said Israel would be destroyed unless he is elected president. He said the Jewish state faced an existential threat from Iran and criticized the nuclear pact that President Barack Obama and other world powers signed.

In comparison, Democrats on the left, led by public intellectual Cornel West, pushed hard for the convention plank to condemn the almost 50-year Israeli military “occupation” of Yehudah and Shomron, a fight ultimately lost to Hillary Clinton supporters on the platform committee. But unlike the GOP platform, the Democrats still call for a two-state solution that would give the Palestinians a sovereign nation.

The Democrats Abroad organization is mostly invisible in the 2016 campaigns in Israel.

“The Republicans are taking advantage of the fact that the Democrats have taken this time to reorganize in Israel, and the Republicans see an opening for them,” said Sheldon Schorer, former spokesman for Democrats Abroad here.

“The Republicans are aware that in the last 30 years a very large proportion of Americans who have moved to Israel are Orthodox, and they are generally right-wing both in Israeli and American politics,” said Jonathan Rynhold, a political scientist at Bar Ilan University in Israel.

“Whether the Republican campaigners here are right and there are enough American Israelis who can vote in the swing states remains to be seen,” Rynhold said. “Obviously many Jews come from New York and that is not a swing state, or they are from California, also not a swing state. I am not sure about New Jersey.”

“My sense is that maybe, if the election is very close, it could make a difference,” he said.

Recent studies by the Pew Research Center found that 68 percent of Jewish Americans are Democrats or lean that way.

In Israel, many observers say the pattern is reversed.

The group I Vote Israel released a poll during the 2012 race that found that 85 percent of the U.S. voters in Israel went for Romney. The survey was criticized as an unscientific snapshot taken at polling stations at Jewish religious schools packed with Republicans. Polling in Israel finds Obama unpopular here. Yet among Jewish Israelis who are not U.S. citizens, surveys say they are equally split over who they’d like to see in the White House.

Haim Rosenfeld, 18, was one of the young volunteers making phone calls to possible voters from the dining room table at the Rabbi’s house.

Rosenfeld was born in the United States but moved to Israel as a baby with his family. He now lives in the Jewish settlement of Tel Mond.

“I sit in an office and make lots of phone calls to Americans,” he said. “I tell those I speak to that Trump has a great staff, he has [vice-presidential candidate] Mike Pence and they have every reason to vote for him. I tell them that he wants to make America great again and that he was successful in his field of business and is very successful in life.”

What else? “I also say that Trump has a staff of advisers who are very experienced and will not let him do stupid things,” he said.