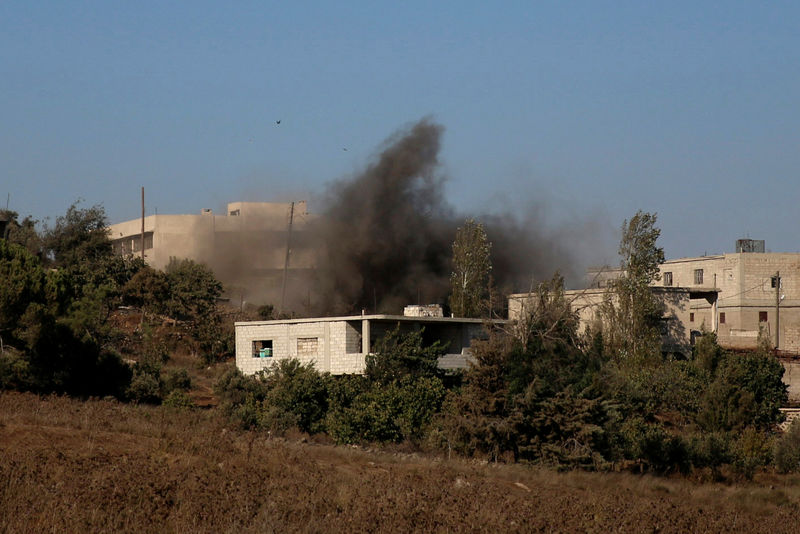 The U.S. military, in an apparent admission that it may have hit the position, said in a statement that coalition air strikes near Deir al-Zor had been halted when Russia told coalition officials they may have hit the Syrian army.

Syria’s army general command said in a statement that the air strike was “conclusive evidence” of U.S. support for Islamic State, noting that the strike was “dangerous and blatant aggression.”

The ceasefire, which took effect on Monday, is the most significant peacemaking effort in Syria for months but has been undermined by repeated accusations of violations on both sides and by a failure to bring humanitarian aid to besieged areas.

Russia, along with Iran and Arab Shiite militias, backs President Bashar al-Assad, while some of the Sunni rebels seeking to unseat him are supported by the United States, Turkey and Gulf Arab states.

All those warring parties are also sworn enemies of the Islamic State terror group, whose territory extends along the Euphrates valley from the Iraqi border, including around Deir al-Zor, up to land near Syria’s frontier with Turkey.

In its sixth year, the conflict has cost hundreds of thousands of lives, displaced half of Syria’s pre-war population, prompted a refugee crisis in the Middle East and Europe and inspired a wave of terror attacks across the world.

Saturday’s airstrikes were reported by Russia and a war monitor to have killed dozens of Syrian soldiers, and were said by Moscow to be evidence of what it called Washington’s “stubborn refusal” to coordinate strikes with Damascus.

Islamic State said via its Amaq news channel that it had taken complete control of Jebel Tharda, where the bombed position was located, which allowed it to overlook government-held areas of Deir al-Zor.

The city’s airport and some districts have been entirely surrounded by Islamic State since last year, with the airport providing their only external access.

The incident threatens to undermine not only the ceasefire agreement, which was brokered by Russia and the United States, but also proposed joint targeting against Islamic State and some other jihadist groups across Syria.

Earlier on Saturday, Russia and Syrian rebels cast doubt over the prospects for the increasingly shaky ceasefire, with Moscow saying the situation was worsening and a senior insurgent warning that the truce “will not hold out.”

While the ceasefire has reduced fighting, some violence has persisted across Syria. Meanwhile, there has been little movement on promised aid deliveries to besieged areas and both sides have accused the other of bad faith.

Russia’s Defense Ministry said conditions in Syria were deteriorating, adding that it believed the ceasefire had been breached 199 times by rebels and saying the United States would be responsible if it were to collapse.

Insurgents say they only reluctantly accepted the initial deal, which they believe is skewed against them, because it could relieve the dire humanitarian situation in besieged areas they control, and blamed Russia for undermining the truce.

“The truce, as we have warned, and we told the [U.S.] State Department – will not hold out,” a senior rebel official in Aleppo said, pointing to the continued presence of a U.N. aid convoy at the Turkish border awaiting permission to enter.

Moscow has itself accused rebels of breaking the truce and said Washington needs to do more to make them abide by its terms, including separating from the jihadist Jabhat Fateh al-Sham, which only broke formal allegiance to al-Qaida in July.

Both sides have accused the other of being responsible for aid deliveries being stuck far from Aleppo, where army and rebel forces were supposed to pull back from the Castello Road which leads into besieged, insurgent-held eastern districts.

Russia on Friday said the Syrian army had initially withdrawn, but returned to its positions after being fired on by rebels, who in turn say they saw no sign of government forces ever leaving their positions.

“There is no change,” said Zakariya Malahifji, an official for a rebel group in Aleppo on Saturday, asked whether there had been any move by the army to withdraw from positions along the road.

Syria’s government said it was doing all that was necessary for the arrival of aid to those in need of it in all parts of the country, particularly to eastern Aleppo.

Two convoys of aid for Aleppo have been waiting at the Turkish border for days. The U.N. has said both sides in the war are to blame for the delay of aid to Aleppo, where neither has yet withdrawn from the Castello Road into the city.

The government said the road was being fired on by rebels, which they deny, so it could not give convoys a guarantee of safety.

Senior U.N. officials have accused the government of not providing letters to allow convoys to reach other besieged areas in Syria.