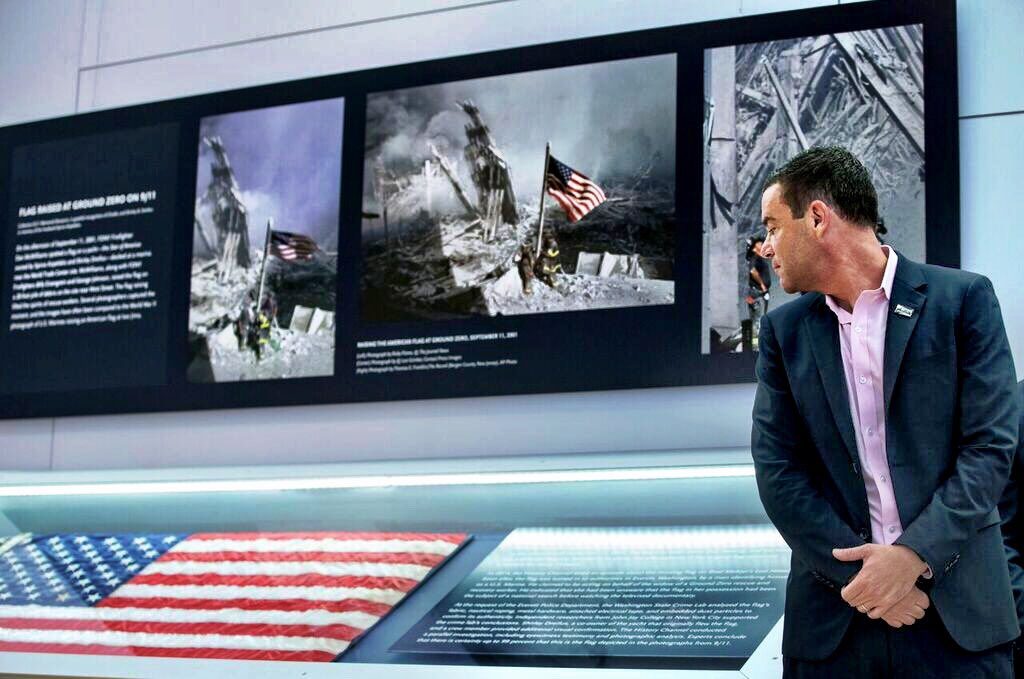 An American flag raised at Ground Zero on Sept. 11 in a defining moment of patriotic resolve took its place at the site Thursday after disappearing for over a decade.

The 3-foot-by-5-foot flag took a symbolic and curious journey from a yacht moored in lower Manhattan to the smoking wreckage of the World Trade Center, then to a firehouse about 2,400 miles away in Everett, Washington — and now to a glass case at the National Sept. 11 Museum.

“In a museum that’s filled with such deeply powerful artifacts, this newest of artifacts is certainly one of the most emotionally and historically powerful,” museum President Joe Daniels said as the display was unveiled Thursday, three days before the 15th anniversary of the terror attacks.

The flag’s absence, he said, “just felt like a hole in the history of this site.”

The flag is the centerpiece of one of the most resonant images of American fortitude on 9/11. After plucking the flag from a nearby boat, three firefighters hoisted it amid the ashen destruction as photographer Thomas E. Franklin of The Record of Hackensack, New Jersey, captured the scene. The picture, which was a finalist for the Pulitzer Prize, inspired a postage stamp, sculpture and other tributes.

Meanwhile, the flag was signed by New York’s governor and two mayors and flown at Yankee Stadium, outside City Hall and on an aircraft carrier near Afghanistan — except it wasn’t the right flag. It was bigger, and by 2004, the yacht’s owners had publicly broached the error.

By then, officials had no idea what had happened to the real flag.

They were in the dark until November 2014, when a man turned up at an Everett fire station with what is now the museum’s flag, saying he’d seen a recent documentary about the mystery.

The man, who gave firefighters only the name “Brian,” said he’d gotten it as a gift from an unnamed National Atmospheric and Oceanic Administration worker who’d gotten it from an unidentified 9/11 widow.

The detectives gathered surveillance video and circulated a police sketch, but they haven’t found the man or been able to confirm his explanation of the flag’s provenance. DNA tests of material found on electrical tape wrapped around the flag’s halyard didn’t match the firefighters or other people known to have handled the flag.

But a forensic expert analyzed dust on the flag and halyard and found it consistent with Ground Zero debris.

Meanwhile, the detectives scrutinized photos and videos of the flag-raising and consulted one of the yacht’s former crew members to compare the flag’s size, material, stitching, hardware and halyard.

Taking all the evidence together, “we feel it’s very likely the one captured in the photo,” said Massingale, now with the Stillaguamish Police Department on the Stillaguamish Tribe’s reservation in Washington.

The yacht’s owners, Shirley Dreifus and the late Spiros E. Kopelakis, were so surprised when first told the flag might have resurfaced that Kopelakis wondered whether the call was a prank, Dreifus said. She and Chubb Insurance donated the flag to the museum.