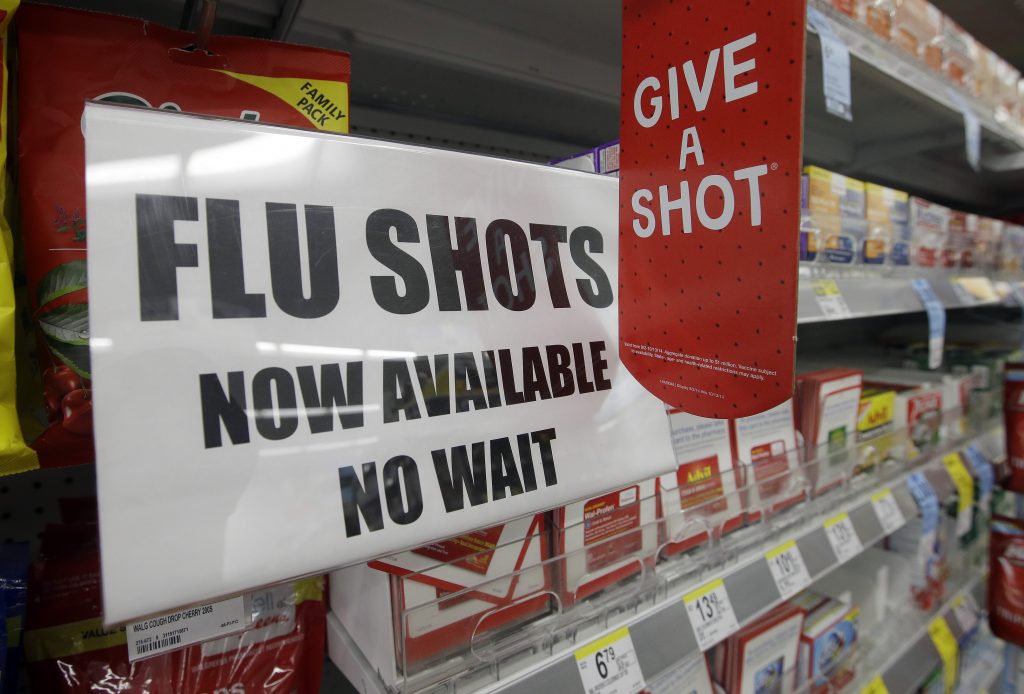 Kids may get more of a sting from flu vaccination this fall: Doctors are gearing up to give shots only, because U.S. health officials say the easy-to-use nasal spray version of the vaccine isn’t working as well as a jab.

Needle-phobic adults still have some less painful options. But FluMist, with its squirt into each nostril, was the only ouch-free alternative for children, and has accounted for about a third of pediatric flu vaccinations in recent years.

The problem: Studies from the Centers for Disease Control and Prevention found in the past few years FluMist hasn’t protected against certain influenza strains as well as regular flu shots. Baffled scientists can’t explain why.

The CDC says FluMist should not be used in the U.S. this year. Tuesday, the American Academy of Pediatrics agreed, and urged youngsters to roll up their sleeves for a shot.

“We’re saying, ‘Shoot, now we’ve got to do the poke again,'” said Dr. Wendy Sue Swanson of Seattle Children’s Hospital and the AAP. But, “we know the flu vaccine is the best shot at prevention and protecting those who are vulnerable from serious and even life-threatening infections from influenza.”

Swanson has tricks to help ease tears and anxiety, like numbing the skin or distraction techniques like telling the youngster to cough on the count of three, coinciding with the poke. Sometimes the youngest feel braver by going first to show up older siblings. Swanson makes her own vaccination a family affair, parents and kids getting the shot together.

But her top advice: Parents, don’t lie and tell your kids the shot won’t hurt. Instead, tell them “it might hurt a bit but it doesn’t last long and you can do this.”

The FluMist mystery isn’t the only vaccine news. Seniors are getting a new option made with an immune booster in hopes of more protection. Here are some other things to know:

The CDC urges a yearly vaccination for just about everyone starting at 6 months of age.

Flu is most dangerous for people over age 65, young children, pregnant women and people with certain health conditions such as asthma or heart disease.

But it sometimes kills even the healthy and young. The CDC says on average flu kills about 24,000 Americans each year, including about 100 children.

If mom gets a flu shot while expecting, the vaccine also helps protect her baby during its first six months of life.

WHEN TO GET THE SHOT

Vaccinations are getting under way as shipments arrive at grocery stores, clinics and doctors’ offices. Despite the FluMist problem, the CDC expects enough to meet the typical U.S. demand, between 157 million and 168 million shot doses.

Flu typically peaks in January or February but there’s no way to predict when it will begin spreading, and it takes about two weeks for full protection to kick in.

WILL I GET SICK?

Flu shots are made with killed flu virus, so you can’t get the flu from them. But they’re not perfect; CDC says they reduce the risk of flu by 50 percent to 60 percent. Sometimes people still catch the flu but generally have a milder case than if they’d gone unvaccinated, or had flu-like symptoms that were caused by a different virus. And occasionally, a strain starts circulating that wasn’t included in the vaccine recipe.

WHAT HAPPENED WITH FLUMIST

Earlier studies had suggested FluMist actually protected youngsters better than shots. It’s not clear why, although FluMist is the only vaccine made of live but weakened flu virus.

So it was a surprise when CDC said earlier this spring that the scenario was flipping and FluMist was failing against certain strains. One theory is that it has to do with a change in the nasal spray’s recipe to incorporate four strains of influenza instead of three.

“Having this scientific puzzle really bothers everybody,” said Dr. William Schaffner of Vanderbilt University and the National Foundation for Infectious Diseases.

The FluMist recommendation could change for future flu seasons if researchers figure that out.

It’s still legal to sell FluMist, which is approved for ages 2 to 49. Manufacturer AstraZeneca said it plans to make a limited amount available in the U.S. in response to some health provider requests.

Two less ouchy gadgets are only for adults. A version of Sanofi’s FluZone can be given “intradermally,” using tiny needles to penetrate the skin instead of muscle. And a version of Seqiris’ Afluria vaccine can be given in a needle-free device called a jet injector that forces the vaccine into a stream of fluid that penetrates the skin.

People ages 65 and older are especially vulnerable to flu’s dangerous complications because they tend to have more underlying health problems and standard flu shots don’t work as well with their waning immune systems.

One alternative to standard shots is Sanofi’s High-Dose Fluzone, containing four times the usual anti-flu ingredient. This year seniors have a second alternative, Seqiris’ Fluad with “adjuvant,” the first U.S. flu vaccine to contain an extra compound designed to rev up the immune system’s response to the shot.

Insurance covers most flu vaccinations, often without a co-payment. For those paying out of pocket, prices can range between $32 and $40.