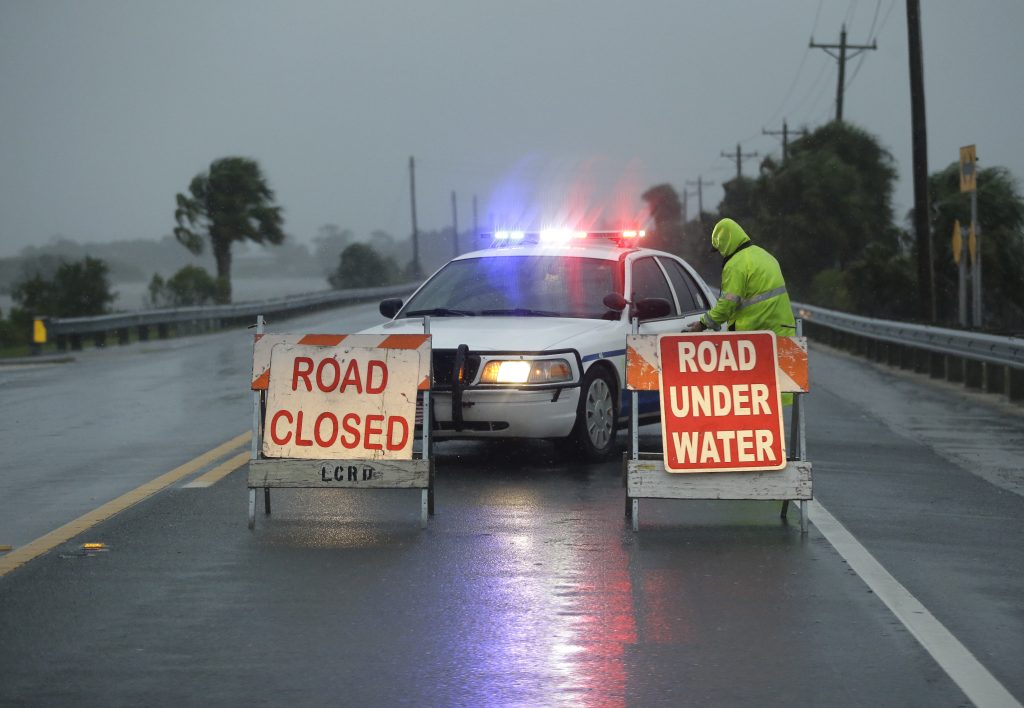 Fierce winds and rain from Hurricane Hermine slammed Florida’s northern Gulf Coast on Friday and power outages left tens of thousands of households in the dark.

Florida Governor Rick Scott said the storm could lead to deaths and told residents to stay indoors until it had passed.

Hermine, a Category 1 hurricane, made landfall shortly after midnight about 5 miles southeast of St. Marks, bringing heavy rains and packing winds of 80 mph. It left 70,000 households in the state capital Tallahassee and thousands more elsewhere without power.

“It is a mess … we have high water in numerous places,” Virgil Sandlin, the police chief in Cedar Key, Florida, told the Weather Channel. “I was here in 1985 for Hurricane Elena and I don’t recall anything this bad.”

Strong gusts downed power lines and trees as widespread flooding inundated communities in northern Florida before the hurricane reached into Georgia, where conditions were expected to deteriorate throughout the early morning on Friday.

“The combination of a dangerous storm surge and the tide will continue to cause normally dry areas near the coast to be flooded by rising waters moving inland from the shoreline,” the National Hurricane Center said in an advisory.

The center warned that some areas along Florida’s northern Gulf Coast may experience 9 feet of flooding.

Pasco County reported crews rescued 18 people and brought them to shelters after their homes were flooded in Green Key and Hudson Beach early on Friday.

Hermine, located about 5 miles east southeast of St. Marks, Florida, shortly after midnight on Friday, also poses a Labor Day weekend threat to states along the northern Atlantic Coast that are home to tens of millions of people.

Hermine became the fourth hurricane of the 2016 Atlantic storm season.

Hermine could dump as much as 20 inches of rain in some parts of the state. Ocean storm surge could swell as high as 12 feet.

Scott declared a state of emergency in 51 of Florida’s 67 counties, and at least 20 counties closed schools.

Mandatory evacuations were ordered in parts of five counties in northwestern Florida, with voluntary evacuations in at least three more counties. Twenty emergency shelters were opened across the state for those displaced by the storm.

“This is life-threatening,” Scott told reporters on Thursday.

After battering coastal Florida, Hermine is expected to weaken and move across the northern part of the state into Georgia, then southern U.S. coastal regions on the Atlantic.

The governors of Georgia and North Carolina on Thursday declared emergencies in affected regions. In South Carolina, the low-lying coastal city of Charleston was handing out sandbags.

In coastal Franklin County, people were being evacuated from barrier islands and low-lying shore areas.

“Those on higher ground are stocking up and hunkering down,” Pamela Brownlee, the county’s emergency management director, said.

Towns, cities and counties were hastily preparing shelters for people and pets and placing utility repair crews on standby.

The storm was expected to affect many areas inland of the Gulf Coast. In Leon County, home to the state capital of Tallahassee, more than 30,000 sandbags were distributed. At Maximo Marina in St. Petersburg, Florida, dock master Joe Burgess watched anxiously as waters rose 6 inches over the dock at high tide on Thursday, before slowly receding.

“If we get hit with a real storm head-on, all the provisions you can make aren’t going to matter out here,” he said, preparing to use a chainsaw to cut beams on covered slips if rising water took boats dangerously close to the roof. “It’d be pretty catastrophic.”

On its current path, the storm also could dump as much as 10 inches of rain on coastal areas of Georgia, which was under a tropical storm watch, and the Carolinas. Forecasters warned of “life-threatening” floods and flash floods there.