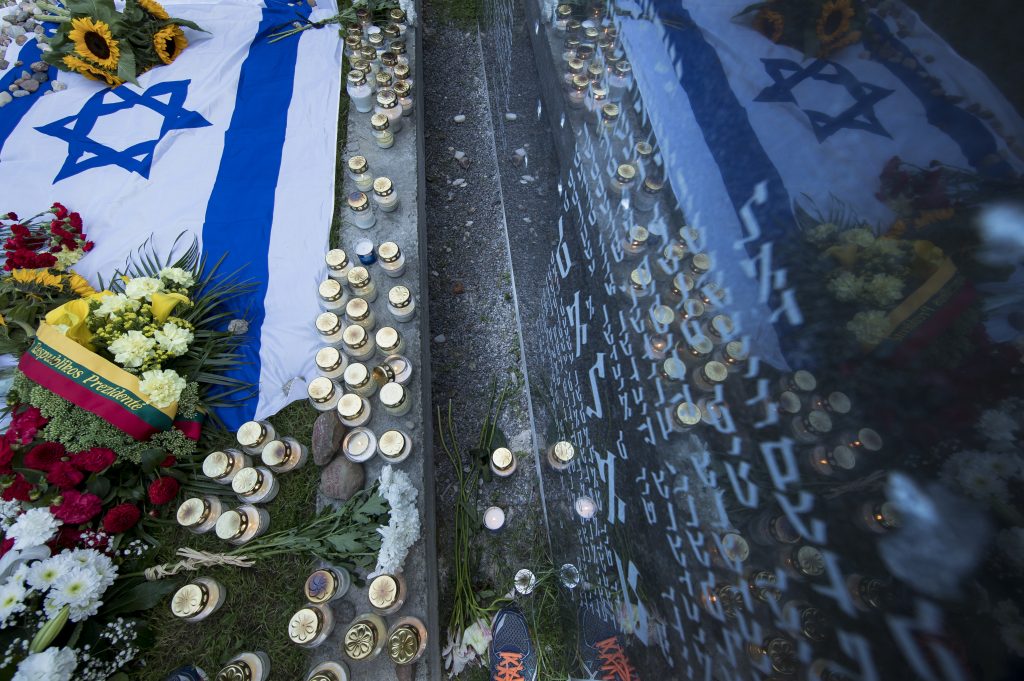 Lithuania’s president joined thousands of people marking the 75th anniversary of the massacre of approximately 2,000 Jews by Nazi occupiers and their Lithuanian collaborators in the town of Moletai. Observers say the scale of the commemoration and march signals a growing openness in the country to own up to the role of native collaboration in Holocaust-era atrocities.

It was the first such high-profile event commemorating the massacre, which President Dalia Grybauskaite said shows the Baltic country is becoming more “open and tolerant.”

A book authored by Dr. Efriam Zuroff, director of Simon Wiesenthal’s Israel Office and Eastern European Affairs, together with Ruta Vanagaite, a popular Lithuanian author, has brought the subject of the role of Lithuanians in mass killings and subsequent attempts to minimize local involvement to the public’s attention.

“The turnout was surprising and outstanding; it’s hard to imagine such a thing taking place even a year ago,” Dr. Zuroff, who attended the event, told Hamodia. “It’s really a milestone in the willingness of Lithuanians to admit their complicity in the Holocaust.”

Marius Ivaskevicius, a well-known Lithuanian film director originally from Molitai, penned an article in advance of the anniversary of the murders, saying that the event constitutes a personal tragedy for him as a native of the town. The article brought further attention to the issue and to the Molitai event more specifically.

Immediately after Moletai was occupied by Nazi forces in 1941, violence against Jews commenced, with many being killed. On August 26, German troops and Lithuanian collaborators gathered the remaining Jewish citizens, mostly women and children, in the town’s shul, keeping them there for three days without food. They were subsequently led out of the town and murdered. A small number who were hidden by local gentiles managed to survive the ordeal.

Tzvi Kritzer, an individual who lives in Israel and who is descended from Jews from Molitai, was central in organizing the event. The commemoration began with a small ceremony at the site of the town’s shul. There, the town’s mayor delivered an emotional address making direct mention of the involvement of Lithuanians in the killings. The event then continued with a mass march from there to the site of the massacre about a mile and a half away.

Local marchers were joined by many others who traveled on buses from Vilnus (Vilna), Lithuania’s capital. The event was also attended by prominent politicians, artists, and leading intellectuals in the country.

Milda Kuodyte, a 23-year-old student attending Monday’s event, said Lithuania’s Holocaust history is a painful one, but “this march is the best proof of a major shift in society.”

With reporting by Associated Press.