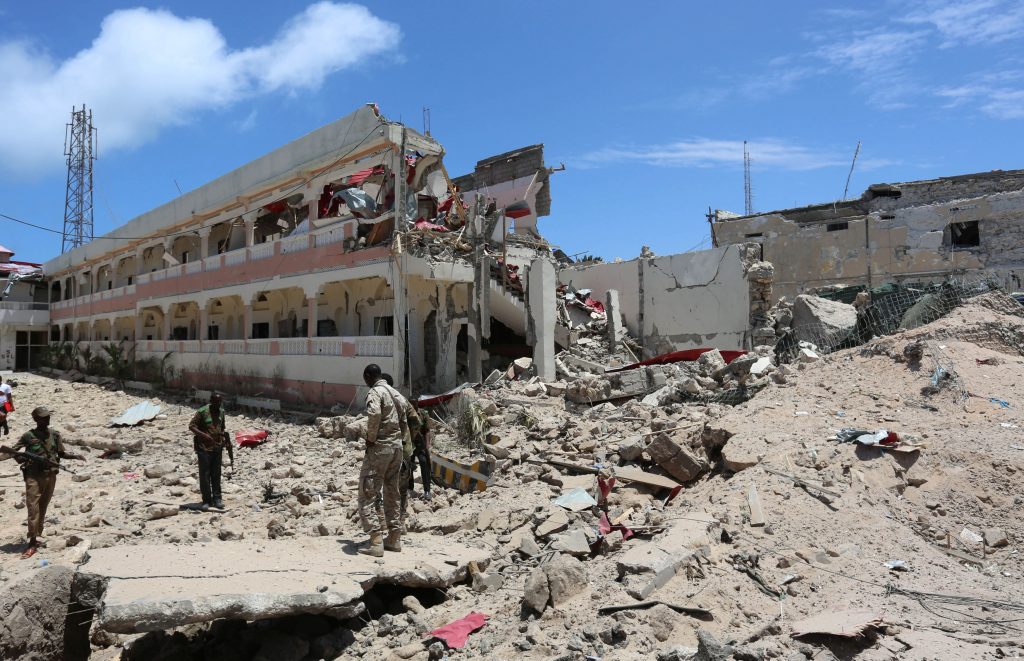 A car bomb claimed by al Shabaab Islamist terrorists killed at least 10 people, including soldiers and civilians, outside the president’s palace in the Somali capital of Mogadishu and badly damaged two nearby hotels, police said.

Information Minister Mohamed Abdi Hayir told state radio that a meeting of security officials was under way inside one of the hotels, the SYL, at the time of blast and that one minister and some state radio journalists were injured in the attack.

The SYL and another hospitality facility, both located near the Presidential Palace, were partially destroyed by the blast, Major Mohamed Ali, a police officer, told Reuters.

“The blast killed 10 (people) including soldiers and civilians and 30 others were wounded,” Ali said.

Witnesses told Reuters that gunfire could be heard after the explosion and that a huge cloud of smoke could be seen above the president’s palace, outside of which were the remnants of the car and splattered blood.

The al-Qaida-linked al Shabaab group has claimed responsibility for several recent explosions in Mogadishu, including a car bomb and gun attack last week that killed 10 people at a popular beach restaurant in the capital.

Al Shabaab’s Radio Andaluz said that the group was behind the attack.

In a separate incident, al Shabaab terrorists attacked military bases housing government and African Union troops southwest of the capital late on Monday, police and the group said on Tuesday. Military officer Major Bile Farah said a soldier and two al Shabaab terrorists were killed in the attack at K-50 in the Lower Shabelle region.

The terrorists were pushed out of Mogadishu by the African Union peacekeeping force AMISOM in 2011 but have remained a serious threat, launching frequent attacks aimed at overthrowing the government.

Seeking to impose its own harsh form of Islam, al Shabaab has also launched attacks in Kenya and Uganda which have contributed troops to the 22,000-strong AMISOM force.