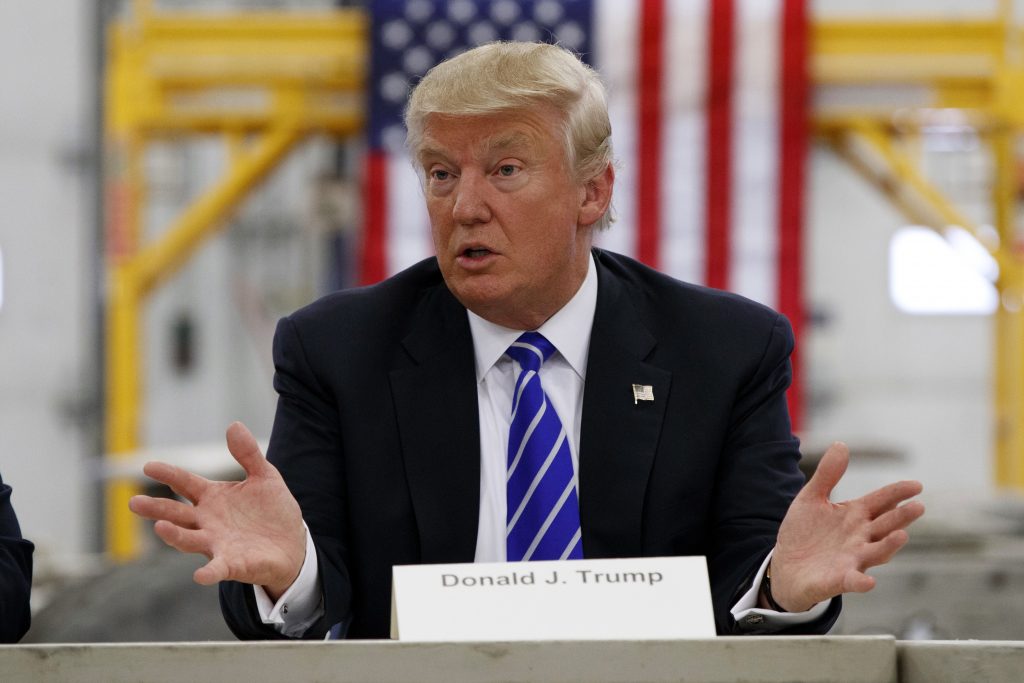 Donald Trump will declare an end to nation building if elected president, replacing it with what aides described as “foreign policy realism” focused on destroying the Islamic State terror group and other terrorist organizations.

In a speech the Republican presidential nominee will deliver on Monday in Ohio, Trump will argue that the country needs to work with anyone that shares that mission, regardless of other ideological and strategic disagreements. Any country that wants to work with the U.S. to defeat “radical Islamic terrorism” will be a U.S. ally, he is expected to say.

“Mr. Trump’s speech will explain that while we can’t choose our friends, we must always recognize our enemies,” Trump senior policy adviser Stephen Miller said Sunday.

On the eve of the speech, the Clinton campaign slammed Trump’s campaign manager for ties to Russia and pro-Kremlin interests, an apparent reference to a New York Times story published Sunday night. The story alleges Paul Manafort received $12.7 million from Ukraine’s former pro-Russia president and his political party for consultant work over a five-year period. The newspaper says Manafort’s lawyer denied his client received any such payments.

Trump on Monday is also expected to outline a new immigration policy proposal under which the U.S. would stop issuing visas in any case where it cannot perform adequate screenings.

It will be the latest version of a policy that began with Trump’s unprecedented call to temporarily bar foreign Muslims from entering the country — a religious test that was criticized across party lines as un-American. Following a massacre in Orlando, Florida, in June, Trump introduced a new standard.

“As he laid out in his Orlando remarks, Mr. Trump will describe the need to temporarily suspend visa issuances to geographic regions with a history of exporting terrorism and where adequate checks and background vetting cannot occur,” Miller said.

Trump is also expected to propose creating a new, ideological test for admission to the country that would assess a candidate’s stances on issues like religious freedom, gender equality and equal rights. Through questionnaires, searching social media, interviewing friends and family or other means, applicants would be vetted to see whether they support American values.

The candidate is also expected to call in the speech for declaring in explicit terms that, like during the Cold War, the nation is in an ideological conflict with radical Islam.

Trump’s Democratic rival Hillary Clinton and top U.S. government officials have warned of the dangers of using that kind of language to describe the conflict, arguing that it plays into terrorists’ hands.

While Trump has been criticized in the past for failing to lay out specific policy solutions, aides say that Monday’s speech will again focus on his broader vision. Additional speeches with more details are expected in the weeks ahead, they said.

Trump is also expected to spend significant time going after President Barack Obama and Clinton, the former secretary of state, blaming them for enacting policies he argues allowed the Islamic State terror group to spread. Obama has made ending nation building a central part of his foreign policy argument for years.

“Mr. Trump will outline his vision for defeating radical Islamic terrorism, and explain how the policies of Obama-Clinton are responsible for the rise of ISIS and the spread of barbarism that has taken the lives of so many,” Miller said Sunday in an e-mail, using an alternative acronym for the Islamic State group.

The speech comes as Trump has struggled to stay on message. Last week, an economic policy speech he delivered calling for lower corporate taxes and rolling back federal regulations was overshadowed by a series of provocative statements, including declaring that Obama was the “founder” of the Islamic State group.

Trump’s allies said Sunday they’re confident that this time, the billionaire developer will stay on track.

Trump and his top advisers, meanwhile, have blamed the media for failing to focus on his proposals.

“If the disgusting and corrupt media covered me honestly and didn’t put false meaning into the words I say, I would be beating Hillary by 20 percent,” he posted Sunday.