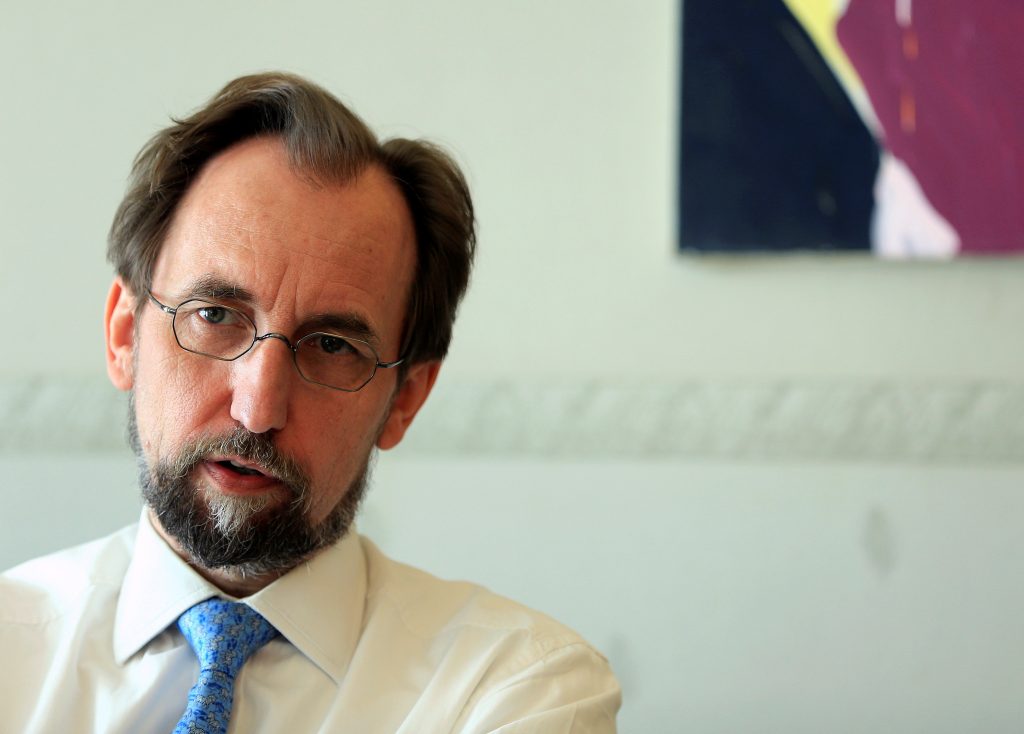 The top U.N. human-rights official urged Turkey on Thursday to stem a “thirst for revenge”, following a failed coup that has led to the arrest of more than 16,000 people, and to uphold detainees’ rights to due process.

Zeid Ra’ad Al Hussein, U.N. High Commissioner for Human Rights, also said that he had raised concerns with China about lawyers and activists put on trial and convicted amid “allegations of forced confessions” in a year-long crackdown.

Zeid told Reuters he had no sympathy with coup plotters who sought to topple the democratically elected Turkish government on July 15, but voiced alarm at the scale of the crackdown.

In an interview in his office alongside Lake Geneva, he said he had received allegations of torture and mistreatment of detainees in Turkey and was seeking a visit by independent monitors to investigate.

Ankara rejected accusations it was carrying out a purge and described arrests and sackings as normal measures to prevent a repetition of a putsch that killed 240 people. It accused Western allies of failing to show support over the coup attempt.

Justice Minister Bekir Bozdag said on Tuesday that 16,000 people had been formally arrested and remanded in custody, while another 6,000 were still being processed.

“What we need to put across is that the thirst for revenge … be reined in and that proper procedures and guarantees of the pursuit of due process are upheld in respect of all these Turkish citizens notwithstanding that some are believed to have turned against the authorities,” Zeid said.

Zeid, a former Jordanian ambassador who took up the top U.N. rights job nearly two years ago, decried the emergence of “demagogues” and populist leaders in many countries who whip up public sentiment against migrants, Muslims, or other groups.

“It’s a really difficult moment. When you have the President of the Philippines saying really the most disgraceful things, it’s a disgrace,” he said, referring to Rodrigo Duterte, who campaigned on threats to kill drug dealers who refused to surrender.

“I’ve spoken publicly about the gross and irresponsible things that Donald Trump has said,” he added. The U.S. Republican presidential nominee has called for a temporary ban on immigration by Muslims and vowed to build a wall on the border with Mexico.

Zeid, turning to repeat presidential elections in Austria set for October, added: “If the head of the Freedom Party should win, Norbert Hofer, I think it’s a real turning point on the European stage and could have consequences well beyond Austria.”

Speaking generally of “skilled propagandists”, he said: “Once you’ve started to go after a particular community, and you feel that the opposition is shrinking…you can then go after others as well.”

Zeid also said that he had raised concerns with Beijing.

China last Friday convicted a rights activist for subversion and sentenced him to three years in prison, the fourth such sentencing in a week.

Dozens of people linked to a Beijing law firm have been swept up in a crackdown on dissent since July last year, as President Xi Jinping’s administration has tightened control, citing a need to boost national security and stability.

“We urge the Chinese authorities to ensure that defenders do not suffer reprisals, intimidation, harassment or legal action for their legitimate work,” Zeid said. “And to reconsider the proceedings against them.”