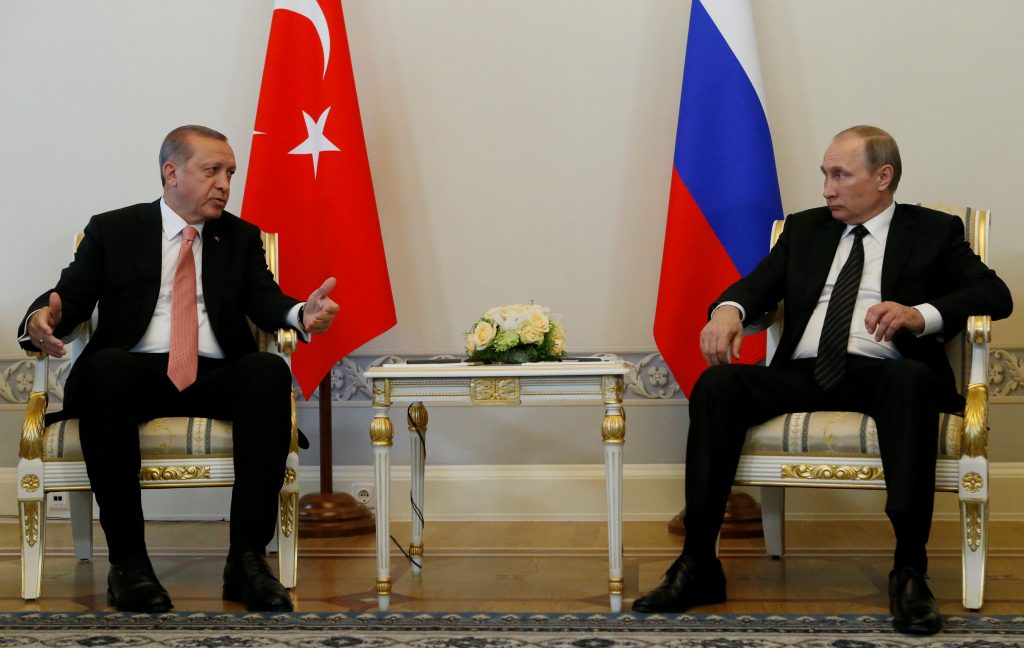 A delegation of Turkish foreign ministry, military and intelligence officials is traveling to Russia for discussions on finding a solution to the Syria conflict, Turkey’s foreign minister said Wednesday.

The announcement by Mevlut Cavusoglu came a day after Turkish President Recep Tayyip Erdogan met with Russia’s Vladimir Putin in St. Petersburg for the first time since the countries agreed to mend relations soured by Turkey’s downing of a Russian plane in November.

The two leaders agreed to take steps to rebuild their damaged trade ties and revive major energy projects. They also held a separate meeting to discuss the conflict in Syria — despite their divergent views. While Moscow has backed Syrian President Bashar Assad throughout the nation’s civil war and further bolstered that support by launching an air campaign last September, Turkey has pushed for Assad’s removal.

Cavusoglu told state-run Anadolu Agency that the Turkish delegation would head for Russia on Wednesday in search of common ground. The meeting would be followed by talks by higher level officials, he said, adding that the two countries had a mutual understanding on a number of issues.

“On Syria, we think the same on the issue of a cease-fire, on humanitarian aid and a political solution,” the minister said. “We may have a different outlook on how the cease-fire should be implemented.”

Cavusoglu said: “We (Turkey) especially don’t want attacks that harm civilians. We don’t believe it is appropriate that the moderate opposition is attacked. We don’t find the Aleppo siege to be appropriate.”

Cavusoglu on Wednesday also denied that Erdogan’s visit to St. Petersburg was intended to send a message to Turkey’s allies in the West, which Ankara accuses of not showing Turkey sufficient support since last month’s failed coup.

Turkey is pressing the United States to extradite U.S.-based Muslim cleric Fethullah Gulen, whom it accuses of orchestrating the coup attempt, and has expressed frustration at its slow response. Gulen has repeatedly denied any involvement.

The dispute has strained U.S.-Turkish ties, with some Turkish officials implying Washington could have been behind the coup. Washington has strongly denied that.

Turkish officials have also fumed at expressions of concern from European officials over Turkey’s sweeping crackdown on the Gulen movement, and accused the West of failing to show support for a democratically elected government. Ankara also lashed out at the EU for failing to uphold its end of an EU-Turkey agreement on migration.

Still, Cavusoglu said the rapprochement with Russia was independent of relations with the West.

“We have always regarded our relations with Russia as complementary not as an alternative (to the West),” Cavusoglu said.

“We are not improving ties with Russia to send a message to the West,” Cavusoglu told Anadolu. “We are doing it for our own interests and for the interests of the region.”

Turkey’s shooting down of the Russian plane near the border with Syria had brought relations with Russia to freezing point until Erdogan apologized to Russia in June.