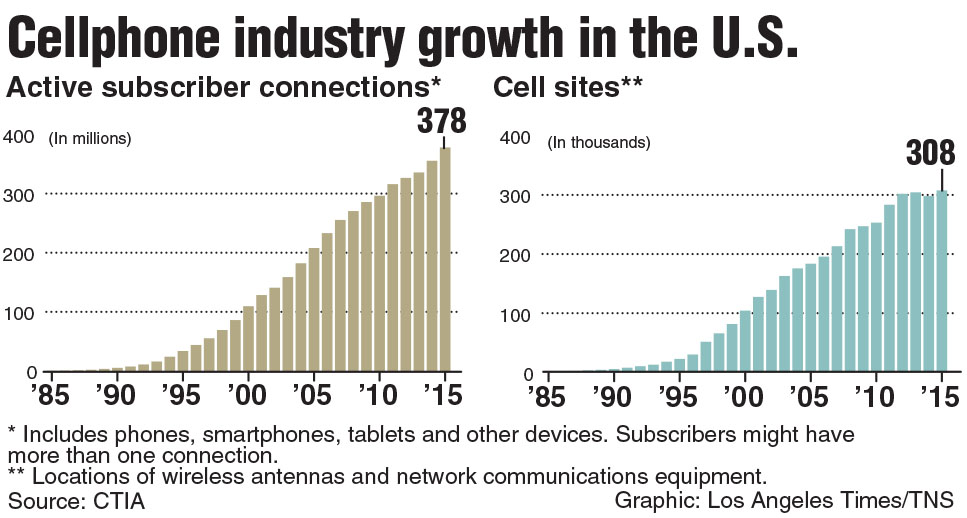 As wireless companies prepare to launch the next generation of service, there are new questions about the possible health risks from radiation emitted by cellphones and the transmitters that carry the signals.

Concerns about the potential harmful effects of radiofrequency radiation have dogged mobile technology since the first brick-sized cellphones hit the market in the 1980s.

Industry and federal officials have largely dismissed those fears, saying that the radiation exposure is minimal and that the devices are safe. Incidences of and deaths from brain cancer have shown little change in recent years despite the explosion in cellphone usage, they note.

But the launch of super-fast 5G technology over the next several years will dramatically increase the number of transmitters sending signals to cellphones and a host of new internet-enabled devices, including smart appliances and autonomous vehicles. And the move to the new technology comes after unsettling findings from a long-awaited federal government study of the cancer risk from cellphone use.

The rats were exposed to nine hours of radiation daily, in 10-minutes-on, 10-minutes-off intervals, over their whole bodies for two years. The researchers found increased incidences of rare brain and heart tumors starting at about the federally allowable level of cellphone radiation for brain exposure, with greater incidences at about two and four times those levels.

Extrapolating the results to humans gets complicated, and there were some puzzling findings as well. Why, for instance, did only male rats show increased tumor rates, and not females? Final results from the peer-reviewed study won’t be released until at least the end of 2017.

The study, which the American Cancer Society said marked “a paradigm shift in our understanding of radiation and cancer risk,” reignited debate about the potential harmful effects of cellphones on human health.

The concerns are amplified by the explosive growth in the number of cellphone subscribers over the last three decades and the increasing amount of time people are using mobile devices amid the popularity of social networks and streaming video.

Now, some experts and wireless-safety advocates are calling for more research as the nation prepares to take the leap into a 5G world that promises to offer more and faster services. And they are reiterating advice — echoed by federal officials — about steps that concerned consumers can easily take to reduce their exposure to radiofrequency radiation, such as using a headset to keep the phone away from their heads.

The National Toxicology Program study “was just an indicator that more and better research is needed,” she said.

Last month, the U.S. became the first nation to allocate a large swath of airwaves for 5G. Those services could be available to consumers by 2020, offering transmission speeds at least 10 times faster than today’s 4G.

The Federal Communications Commission voted unanimously to allow wireless providers access to high-frequency airwaves that have had limited uses because they can’t carry data very far.

Technological advances have made it possible to expand consumer wireless services into those airwaves. But to use the spectrum, wireless companies will have to install thousands of small base stations — some just the size of smoke detectors — on utility poles and buildings to pass the signals along.

The industry will spend about $56 billion to develop, test and deploy 5G services in the U.S. through 2025, according to IGR, a wireless market-strategy consulting firm.

There were about 308,000 wireless antennas on cell towers and buildings at the end of last year, double the number in 2002, according to CTIA, a leading wireless trade group.

It’s unclear how many smaller base stations would be needed for 5G service. But it’s widely believed that there would need to be exponentially more because of the limited distance the signals can travel. One researcher estimated a station would be needed for every 12 homes in a dense urban area.

The prospect of more transmitters emitting radiofrequency radiation — though at much lower levels than those coming from cell towers — has alarmed people concerned about the effects on humans.

The move to 5G presents additional concerns because there will be more energy in signals traveling over the high-frequency spectrum and the smaller transmitters will be closer to where people live and work.

“There is a big concern with the previous technology and it’s just being made worse with 5G,” said Kevin Mottus, outreach director for the California Brain Tumor Association, who attended the FCC meeting and unsuccessfully attempted to ask officials about the health effects.

“These are microwave transmitters, and the closer you are to them, the more problems,” he said.

Desiree Jaworski, executive director of the Center for Safer Wireless, a nonprofit organization that educates the public about the potential hazards of wireless radiation, said 5G signals will be harder for people to avoid.

“Right now, you don’t have to live next to a cell tower. If you’re concerned about it, you can move away,” she said. “But once they have these cell antennas everywhere, you won’t be able to do that.”

The FCC shares responsibility for the safety of cellphones with the Food and Drug Administration and sets maximum allowable levels for safe exposure to radiofrequency radiation — known as the specific absorption rate — that devices sold in the U.S. must not exceed. The FCC also regulates the exposures from base stations transmitting wireless signals.

In 2013, the FCC opened a formal inquiry into whether it needed to reassess its exposure limits. That proceeding remains open, the agency said.

“Scientific evidence always informs FCC rules on this matter,” said spokesman Neil Grace. “We will continue to follow all recommendations from federal health and safety experts including whether the FCC should modify its current policies and RF exposure limits.”

The FDA said it “believes that the weight of scientific evidence does not show an association between exposure to radiofrequency from cellphones and adverse health outcomes.” But that agency said more research is needed.