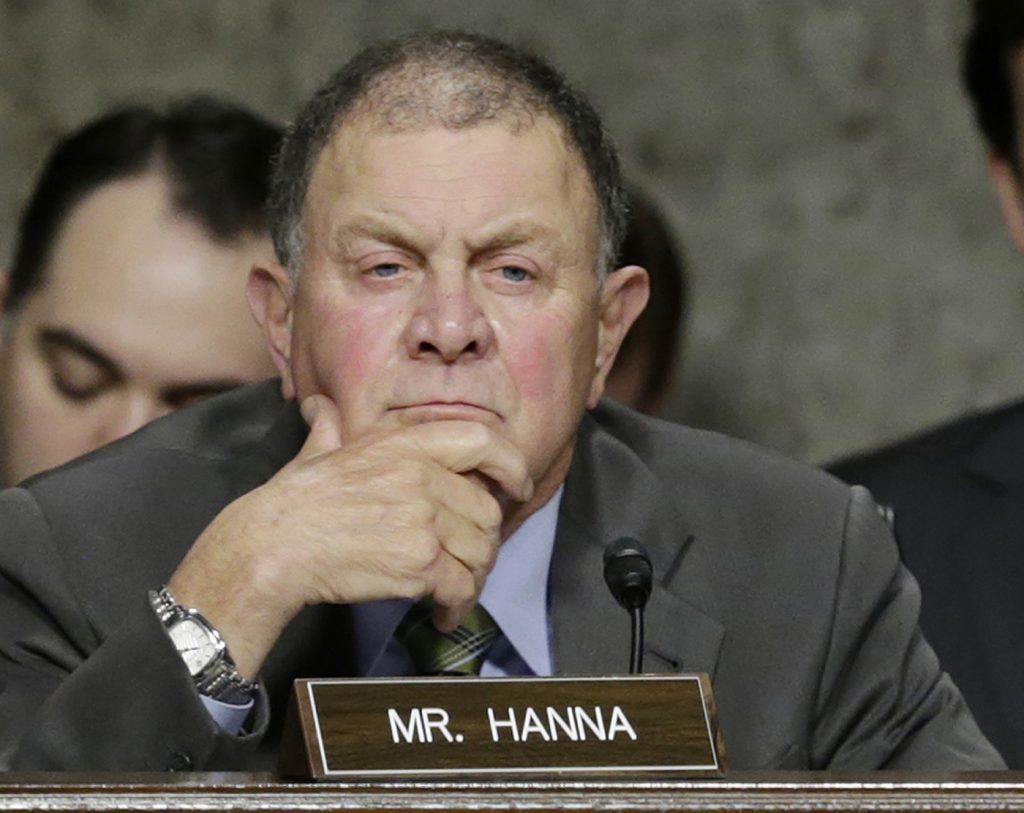 Rep. Richard Hanna, R-N.Y., became the first sitting Republican member of Congress to say publicly that he plans to vote for Democrat Hillary Clinton for president, declaring in an interview with Syracuse.com that Trump is a “national embarrassment.”

The three-term congressman, who represents a swath of upstate New York near Syracuse but is not running for re-election this year, has bucked his party in the past on issues. He declared his support for Clinton in an opinion piece published Tuesday on the news website and elaborated in an interview that Trump’s remarks about the parents of a Muslim-American Army captain killed in Iraq were the final straw.

“I saw that and felt incensed,” Hanna said in the interview. “I was stunned by the callousness of his comments.”

He added: “I think Trump is a national embarrassment. Is he really the guy you want to have the nuclear codes?”

Hanna had already said he would not support Trump — a stance shared by a handful of his Republican colleagues. But his pronouncement that he would support Clinton, a woman reviled by much of his party, dealt yet another blow to Trump as his campaign struggles under mounting bipartisan criticism over his handling of Khizr and Ghazala Khan, immigrants from Pakistan who appeared last week at the Democratic National Convention and have since been highly critical of Trump in interviews.

“In his latest foray of insults, Mr. Trump has attacked the parents of a slain U.S. soldier,” Hanna wrote. “Where do we draw the line? I thought it would have been when he alleged that U.S. Sen. John McCain was not a war hero because he was caught. Or the countless other insults he’s proudly lobbed from behind the Republican presidential podium. For me, it is not enough to simply denounce his comments: He is unfit to serve our party and cannot lead this country.”

Trump has faced perhaps the most sustained criticism of the election cycle over his continued disparagement of the Khans, whose son Humayun was killed in 2004, at age 27, by a car bomber in Iraq. Trump said Khizr Khan had “no right” to assail him, as he did in a speech at the Democratic convention in which he encouraged the businessman to read the Constitution. He also suggested that Ghazala Khan was not permitted to speak at the convention because she is Muslim.

Trump refused to stand down this week, tweeting Monday morning that Khan had “viciously attacked” him and had shifted focus from the real concern, “RADICAL ISLAMIC TERRORISM.”

On the heels of his online outburst, a bipartisan group of decorated combat veterans, members of Congress and family members of slain soldiers on Monday scolded Trump for his feud with the parents of a fallen soldier. A particularly lengthy and impassioned rebuke came from McCain, chairman of the Senate Armed Services Committee. The Arizona Republican was a prisoner of war in Vietnam.

“While our party has bestowed upon him the nomination, it is not accompanied by unfettered license to defame those who are the best among us,” McCain said.

This week also saw Sally Bradshaw, a longtime adviser to Jeb Bush and an architect of the GOP’s attempt four years ago to court younger, more diverse voters, flee the Republican Party. She said she would vote for Clinton if the race in her home state of Florida ended up being close.

“This is a time when country has to take priority over political parties. Donald Trump cannot be elected president,” she told CNN.

Neither departure — Hanna’s nor Bradshaw’s — necessarily signals faltering support among voters drawn to Trump in part because of his strident rhetoric and willingness to eschew political decorum in favor of a tough stance on immigration and national defense.

Yet they show that Trump’s delicate alliance with party leaders, rather than improving as the campaign wears on, is continuing to fray. The desertions also reveal the painful internal divide over how the party should handle a nominee with little apparent loyalty to other Republicans. On Monday, for instance, Trump tweeted words of thanks to Paul Nehlen, who is challenging House Speaker Paul Ryan in the Republican primary in his Wisconsin House district this month.

Meanwhile, Trump’s numbers have taken a dive in polls conducted following both political conventions. A CBS poll found a four-point bump for Clinton, who now enjoys a 46–39 lead over her Republican opponent, while a CNN/ORC survey showed the Democratic nominee with a 7-point bump and a 52–43 lead over Trump.