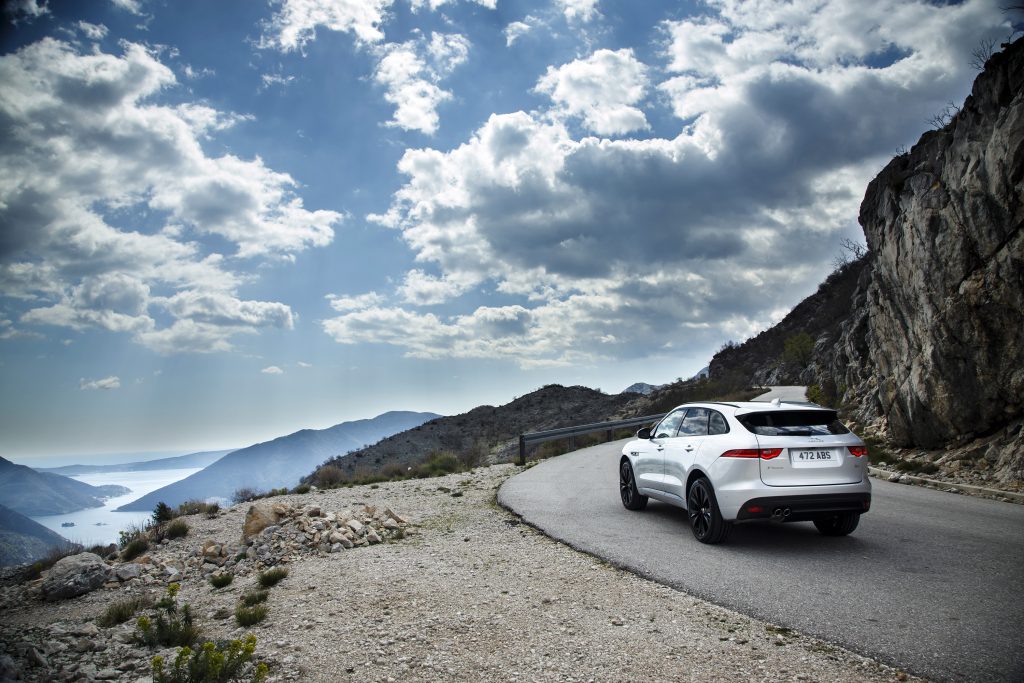 With the launch of the 2017 F-Pace two-row crossover, Jaguar, although a bit late to the party, has entered one of the luxury market’s most competitive segments.

Of course, you can understand Jaguar Land Rover’s reticence to go this route.

When you have Land Rovers sitting at the other end of your showrooms, why bother with an SUV? Simple, where Land Rovers are great once the concrete ends, their on-road ability is somewhat compromised by their off-road agility.

So it makes sense that rather than dilute Land Rover’s heritage by producing a street-warrior Rover, you would endow it with a corporate badge long-revered for its sporting moves.

The vehicle certainly looks the part. It’s sensuous, sinewy lines have a simplicity that is pure modern Jaguar, although the vehicle clearly shows an influence wrought by the Porsche Macan rather than any Land Rover.

That’s not the case inside, where you’ll find a cabin trimmed in the starkly modern Jaguar idiom, trading the obvious plushness of Jags of yore for those more akin to a trendy hotel.

The instrument panel is identical to the one used in the new XE compact sedan and includes an optional virtual instrument cluster that allows for a large degree of customization. The controls on the infotainment system are designed for ease of use and respond quickly, unlike those with past Jaguar systems. Credit the Intel quad core processors. The climate control buttons are separate, just below the screen. The overall effect is one of eloquent simplicity, which is the ultimate luxury.

Those seated up front are treated to a generous amount of space. The seats are supportive with good side bolstering, but they do prove a bit firm over longer stints. And it would help if Jaguar would pad each side of the center console a bit more for those drivers with longer legs. But what separates the F-Pace from its competitors is the equally impressive amount of head and legroom found in the rear seat, which is a little low but not uncomfortably so. And cargo space? It’s expansive considering the vehicle’s footprint. The cabin’s sense of grand space is enhanced by the standard panoramic sunroof.

Once underway, the cabin proves to be quiet despite the growl from the F-Pace’s supercharged 3.0-liter V-6, with either 340 or 380 horsepower. A new turbocharged 2.0-liter diesel engine will join the lineup shortly after launch. It’s rated at 180 horsepower and 318 pound-feet of torque. All engines mate to a responsive eight-speed automatic transmission made by ZF.

Being a crossover, the F-Pace does have a more compliant feel than the XE and XF sedans with which it shares its platform, but that doesn’t affect handling, unless you’re an asphalt Andretti. It handles far better than your typical crossover, with an ample amount of agility and athleticism. Body motions are very well controlled over rough stuff, and cornering behavior is exemplary though the twisties, remaining flat enough to impart more than a bit of driving fun. The all-wheel-drive system employs rear-wheel drive unless traction is needed, but unlike some competitors, it doesn’t have torque vectoring. That and the lack of run-flat tires give it a personality lacking on its German competition. Steering is quick, if a little light.

An off-road cruise control system, similar to the Land Rover system, works well in milder off-road situations. But it’s designed for the unpaved trail to your country cottage rather than for heavy duty boulder bashing.

The F-Pace is offered in base, Premium, Prestige, and R-Sport trim. A $1,000 Adaptive Dynamics package, offered on the Prestige and R-Sport, allows drivers to customize the engine, transmission, steering and suspension settings. As you might expect, Dynamic mode is heaps of fun until the road deteriorates, whereupon Normal will become a mode of choice.

Of course, when not listening to the marvelous engine notes you could listen to the optional Meridian audio system whose delicious sound is a feast for the ears.

Throw in a generous 5-year, 60,000-mile warranty and a price that starts at $40,990, and what you end up with is the must-have SUV of the year. No doubt this cat is the pick of the litter in its class, the one you must test drive if you’re looking for a luxury sport utility vehicle.

It will leave you purring.