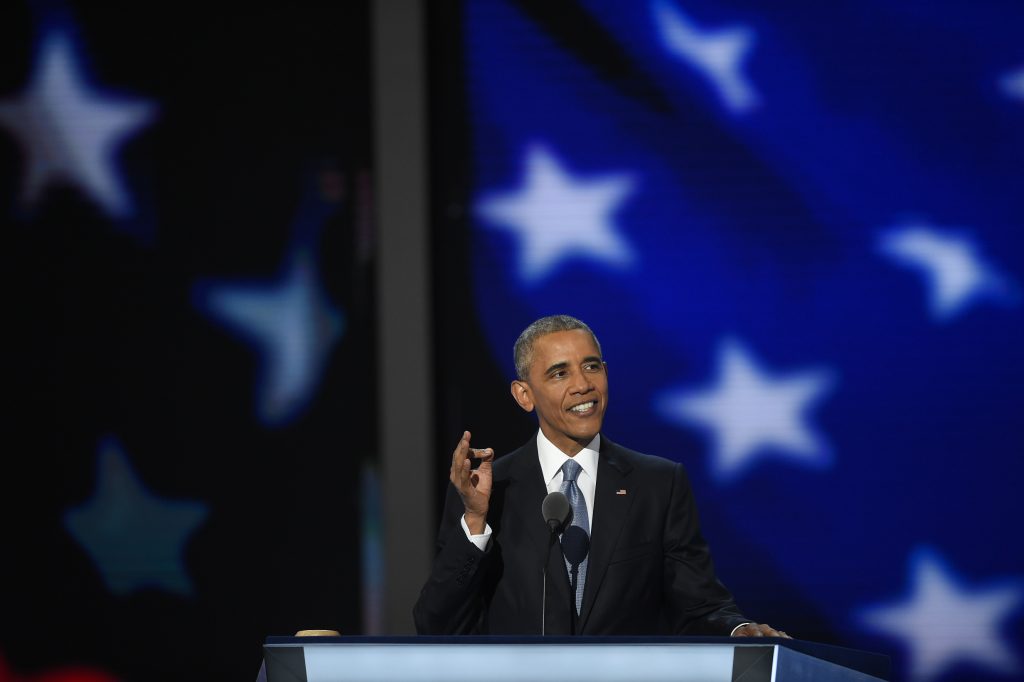 His own legacy on the line, President Barack Obama implored Americans to elect Hillary Clinton to the White House, casting her as a candidate who believes in the optimism that powers the nation’s democracy and warning against the “deeply pessimistic vision” of Republican Donald Trump.

“America is already great. America is already strong,” he declared to cheering delegates Wednesday night at the Democratic convention. “And I promise you, our strength, our greatness, does not depend on Donald Trump.”

For Democrats, the night was steeped in symbolism, the passing of the baton from a barrier-breaking president to a candidate trying to make history herself. It culminated with Clinton making a surprise appearance on stage with Obama after the latter’s speech, an almost unimaginable image eight years ago when they battled for the Democratic nomination.

Obama urged Americans to summon the hopefulness of that White House campaign, before recession deepened and new terror threats shook voters’ sense of security. He robustly vouched for Clinton’s readiness to finish the job he started, saying that “no matter how daunting the odds, no matter how much people try to knock her down, she never, ever quits.”

Earlier Wednesday, Clinton’s running mate, Virginia Sen. Tim Kaine, introduced himself to the nation as a formidable foil to Trump in his own right. With folksy charm, he ridiculed Trump’s list of promises and imitated one of the GOP candidate’s favorite phrases.

“Believe me!” he said mockingly, as the audience boomed back, “No!”

Obama’s vigorous support for Clinton is driven in part by deep concern that Trump might win in November and unravel his two terms in office. He warned repeatedly Wednesday that the billionaire businessman is unprepared for the challenges that would await him in the Oval Office.

Trump fueled more controversy Wednesday when he encouraged Russia ­– which Democrats have already accused of being behind a trove of leaked DNC emails posted on WikiLeaks – to find and publish the thousands of emails Clinton says she deleted from her private email server while she was secretary of state.

Wednesday night’s Democratic lineup was aimed at emphasizing Clinton’s own national-security credentials. It was a significant shift in tone after two nights spent reintroducing Clinton to voters as a champion for children and families, and relishing in her historic nomination as the first woman to lead a major political party into the general election.

The convention’s third night was also a time for Democrats to celebrate Obama’s legacy. Vice President Joe Biden, who decided against running for president this year after the death of his son, called it a “bittersweet moment.”

A son of Scranton, Pennsylvania, Biden appealed directly to the working class white voters who have been drawn to Trump’s populism, warning them against falling for false promises and exploitation of Americans’ anxieties.

“This guy doesn’t have a clue about the middle class,” he declared.

Kaine also picked up the traditional attacking role of the presidential ticket’s No. 2. He tore into Trump, mocking his pledge to build a wall along the Mexican border, asking why he has not released his tax returns and slamming his business record, including the now-defunct Trump University.

“Folks, you cannot believe one word that comes out of Donald Trump’s mouth,” Kaine said. “Our nation is too great to put it in the hands of a slick-talking, empty-promising, self-promoting, one-man wrecking crew.”

Liberals, particularly those who supported Vermont Sen. Bernie Sanders, have grumbled about Kaine being on the ticket, particularly because of his support for “fast track” approval of the Trans-Pacific Partnership trade pact. Several delegates held up anti-TPP signs as he spoke.

In a move aimed at broadening Clinton’s appeal, former New York City Mayor Michael Bloomberg – a Democrat-turned-Republican-turned independent who had considered launching a third party bid for president– endorsed the Democratic nominee. A billionaire businessman himself, Bloomberg took aim at Trump’s bankruptcies, reliance on foreign factories and other economic experience: “The richest thing about Donald Trump is his hypocrisy.”

President Bill Clinton, filling the role of devoted political spouse, joined the crowd packed to the arena rafters in cheering the attacks on Trump. Bill Clinton had addressed the convention on Tuesday night.

The core of Clinton’s strategy is putting back together Obama’s winning White House coalition. In both his campaigns, Obama carried more than 90 percent of black voters, the overwhelming majority of Hispanics, and more than half of young people and women.

That coalition was vividly on display in the first two nights of the convention in Philadelphia. Female lawmakers were prominently featured, along with young activists, immigrants, and mothers whose black children were victims of gun violence or killed during encounters with law enforcement.

Gun violence continued as a theme Wednesday night, as families of mass shooting victims took the stage. Delegates rose in an emotional standing ovation for the mother of one of the victims in last month’s Orlando club shooting, who asked why “common-sense” gun policies weren’t in place when her son died.

“I never want you to ask that question about your child,” Christine Leinonen said.

Though Obama has six months left in office, his address Wednesday had the feeling of a political transition. He was emotional as he thanked Americans for sustaining him through difficult stretches.

“Tonight, I ask you to do for Hillary Clinton what you did for me,” he said. “I ask you to carry her the same way you carried me.”

Kathleen Hennessey and Ken Thomas contributed to this report.