The death toll from an attack Wednesday on the Kurdish-held western section of Qamishli town in northeastern Syria has risen to 55, with many victims still buried under the rubble, a hospital official told dpa.

“The number keeps increasing as lots of victims are still buried under the debris. Many of the injured are listed in critical condition,” Qamishli National Hospital Director Omar Al-Qaqoub said.

“Our new accounts of the wounded also reached more than 160, as many of the Kurdish police forces who were wounded were taken to various hospitals in the town for treatment,” he added.

He added that hospitals in the area are flooded with wounded people.

The head of the Britain-based Syrian Observatory for Human Rights, Rami Abdel Rahman, estimated the number killed to be 48, with more than 140 wounded.

“This is the worst blast to hit the Qamishli area,” Abdel Rahman said.

Kurdish news agency Rudaw said the first blast was caused by a truck loaded with explosives which targeted a center run by the Kurdish police force.

A second blast hit a street in the east of the city that is home to the local defense administration, the agency reported, giving no details on how many were wounded or injured in the attack.

Abdel Rahman told dpa earlier that a car bomb targeted the Justice Department and Kurdish internal security force in the town, which is located in al-Hasaka province.

Hospitals across Qamishli have put out urgent calls for the donation of all blood types in the wake of the blasts. 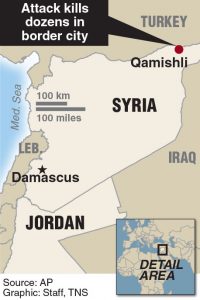 Qamishli, which is predominantly inhabited by Kurds, has regularly been targeted by bombings, many of which were claimed by Islamic State.

Islamic State claimed responsibility for one of Wednesday’s bombings.

“An Islamic State fighter managed to reach a number of buildings of the Kurds via his explosives-laden truck, blowing himself up among them … destroying their buildings … killing over 100 and injuring dozens,” the statement said, via one of its supporting channels on the Telegram app. It added that the attack was to avenge the killing of men, women and children in the Islamic State-controlled Minbij city, north of Syria, and vowed to launch further attacks against the Kurds.

On May 31, the Kurdish-led Democratic Forces of Syria (DFS), backed by U.S.-led airstrikes, launched a wide-scale offensive on the Minbij pocket, the terrorists’ last territory on the Turkish border.

The operation is aimed at cutting the terror group’s last link with the outside world and isolating its de facto Syrian capital, al-Raqqa, which lies southeast of Minbij.

Qamishli is under the joint control of president Bashar al-Assad’s forces and the Syrian Kurdish People’s Protection Units (YPG), which in April agreed to a ceasefire following days of deadly fighting for control of the city.