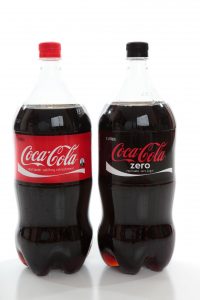 Coca-Cola trimmed its sales outlook for the year Wednesday, citing weakening demand in major international markets, including China and part of South America.

The world’s biggest soda maker said its global volume for the second quarter was flat from a year ago, dragged down by poor results in some areas outside the United States. The maker of Fanta, Sprite and Powerade said it sold more non-carbonated drinks, but less soda.

Coca-Cola Co. had warned earlier this year that its soda volume was being pressured by rougher economic conditions in emerging markets, where its sodas tend to account for a higher portion of sales.

Although soda remains the flagship beverage for Coca-Cola and its rival PepsiCo Inc., the companies say they are diversifying and focusing on categories with more potential. To offset the declines in soda volume, they’re also raising prices and marketing, putting the drinks in mini-cans or glass bottles to market them as more premium.

Still, Quincey said it will take some time for such actions to take hold and that Coca-Cola did not expects results in the country to improve in the rest of the year.

Volume also declined in Venezuela, where a sugar shortage forced the company to temporarily shut down production.

In its home U.S. market, Coca-Cola saw growth in non-carbonated drinks offset a decline in sodas. Soda has been losing favor in the United States for years, given the proliferation of options on shelves and soda’s image as fueling weight gain.

For the year, Coca-Cola said it now expects overall sales to climb 3 percent, after stripping out the effect of currency fluctuations, acquisitions and divestitures. That’s compared with its forecast for growth of 4 percent to 5 percent.

Coca-Cola’s total revenue for the quarter declined 5 percent to $11.54 billion, missing the $11.69 billion analysts expected. After stripping out the impact of currency fluctuations and acquisitions and divestitures, the company said pricing helped lift “organic” revenue 3 percent.

The Atlanta-based company earned $3.45 billion, or 79 cents per share, for the quarter. Earnings, adjusted for non-recurring gains, were 60 cents per share. That was more than the 58 cents per share analysts expected, according to Zacks Investment Research.