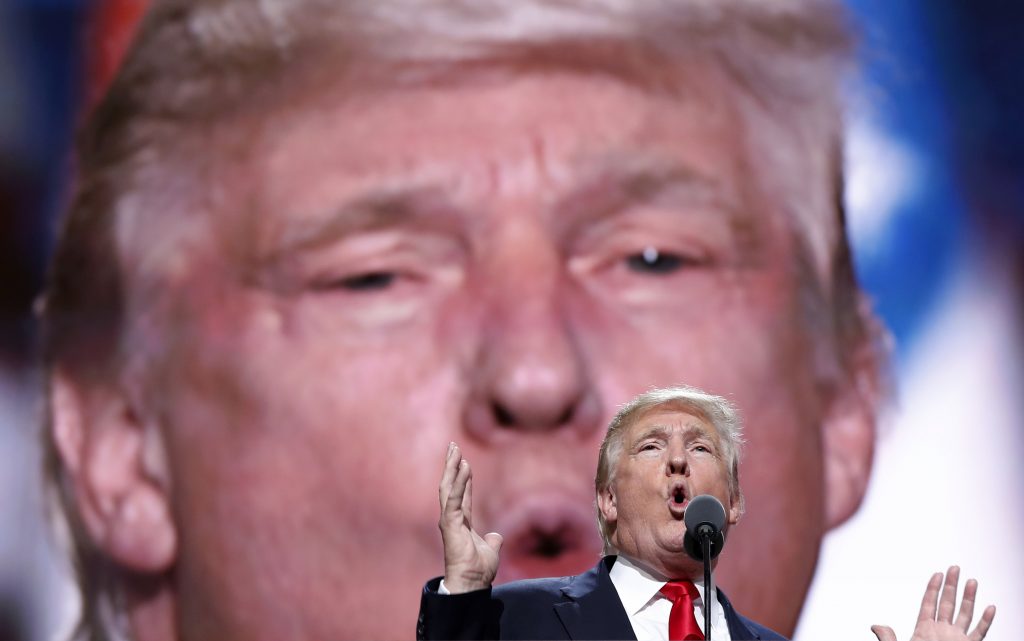 WASHINGTON (AP) — Donald Trump singled out France as one country he would subject to the “extreme vetting” he is proposing for those seeking to enter the United States, a move he says is necessary to deter attacks by people coming from countries “compromised by terrorism.”

The GOP presidential nominee, in an interview that aired Sunday on NBC’s “Meet the Press,” was asked if his proposal might mean that ultimately far fewer people from overseas would be allowed into the United States.

In the interview, Trump also rejected suggestions that his stance on requiring NATO members to pay their share was a mistake; criticized rival Hillary Clinton’s newly named running mate, Sen. Tim Kaine, for accepting gifts while Virginia’s governor; dismissed descriptions of his nomination acceptance speech as “dark,” instead calling it “optimistic”; and expressed disapproval of David Duke, the former Ku Klux Klan leader who is seeking a Senate seat from Louisiana.

Trump reiterated that he wouldn’t release his tax returns until an IRS audit is complete, although such an inquiry doesn’t bar him from making the documents public. Trump also said he believes 2012 GOP nominee Mitt Romney lost the election because of a public scrutiny of his taxes.

For months Trump has called for a temporary ban on foreign Muslims seeking to enter the United States and criticized the Obama administration for continuing to admit refugees from Syria.

In his speech Thursday night at the Republican National Convention, he said the U.S. “must immediately suspend immigration from any nation that has been compromised by terrorism until such time as proven vetting mechanisms have been put in place” — notably leaving out any reference to Muslims or to Syria, Iraq and other Mideast nations.

In the NBC interview, Trump noted “specific problems” in Germany and France and “Meet the Press” host Chuck Todd asked if his proposal would limit immigration from France. “They’ve been compromised by terrorism,” Todd said.

Trump replied: “They have totally been. And you know why? It’s their own fault. Because they allowed people to come into their territory.” He then called for “extreme vetting” and said: “We have to have tough, we’re going to have tough standards. … If a person can’t prove what they have to be able to prove, they’re not coming into this country.”

Trump’s campaign chairman, Paul Manafort, played down the potential effects of Trump’s call for “extreme vetting” for people coming from France and Germany. Manafort said the United States will have an easier time screening people from those countries because of long-standing “cooperative agreements.”

“He is calling for cooperative efforts to make sure that wherever people are coming in, that we know who they are and what they stand for,” Manafort said told Fox News on Sunday.

During his interview, Trump also:

— Rejected suggestions that his comments on NATO members being required to pay their share in order to get the benefits and protection afforded by the treaty were a mistake.

— Criticized Kaine for accepting $160,000 worth of gifts, much of it for trips, while serving as governor. The gifts were legal under the state’s permissive ethics rules, but Trump said: “To me, it’s a big problem … how do you take all these gifts?”

— Took issue with descriptions of his convention speech earlier in the week as “dark.” ”It was an optimistic speech,” Trump said. Referring to his mention of crime as well as shootings and terrorist attacks both here and overseas, he said, “Sure, I talk about the problems, but we’re going to solve the problems.”

— Criticized Duke, who cited Trump’s campaign as an inspiration for his Senate bid. Trump was quick to say he rejected efforts by Duke to run for the Senate. In an interview several months ago, Trump was asked about Duke offering his support and Trump responded: “I don’t know anything about David Duke.” His initial response drew harsh criticism from Democrats, Republicans and civil rights groups,” and he later said “I disavow” Duke’s support.

— Refused to release his tax returns, citing the IRS audit that he says is an annual process for him. Trump has resisted calls to release his tax returns for months, a move that every major presidential candidate has made since 1976. Trump said he believes Romney lost in 2012 because of public scrutiny of his returns. “They took his tax return, and they found a couple of little things. Nothing wrong. Just standard. And they made him look very bad, very unfair. But with all that said, I’d love to give them, but I’m under audit. When the audit’s finished, I’ll give them.”