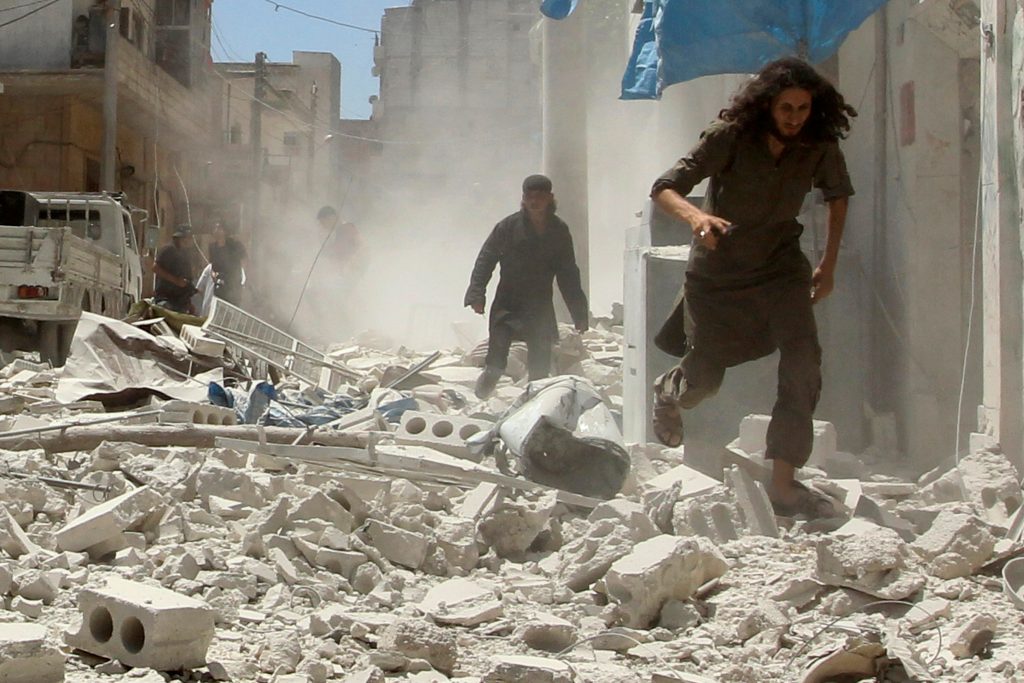 BEIRUT (AP) — U.S.-backed Syrian fighters on Thursday gave Islamic State terrorists 48 hours to leave an encircled town near the Turkish border without a fight, a last-ditch effort to protect civilian lives, according to a statement issued by the group.

The Manbij Military Council, which is part of the U.S.-supported Kurdish-led Syrian Democratic Forces, said the initiative represents the “only and last” opportunity for IS terrorists to “leave the town alive.”

Backed by U.S.-led coalition airstrikes, SDF fighters have encircled Manbij and seized western parts of the IS-held town but have so far avoided an all-out assault to minimize civilian casualties. However, airstrikes in the Manbij countryside blamed on the coalition have killed scores of civilians in the past few days, including children.

The statement accused IS of using civilians as human shields and said it would allow the group a last opportunity to leave the town with their “individual weapons” to a location of their choice. Manbij is an IS hub and lies on a key supply route to the Islamic State group’s de facto capital of Raqqa. If Manbij is captured by the U.S.-backed fighters, it will be the biggest strategic defeat for IS in Syria since July 2015, when the extremist group lost the border town of Tal Abyad.

In a statement distributed Thursday, UNICEF said dozens of children were among those killed in airstrikes in and around Manbij in the past few days.

The U.S.-led coalition has not commented on the accusations but has stepped up its airstrikes on the area, which is controlled by the Islamic State group.

“No matter where they are in Syria or under whose control they live – absolutely nothing justifies attacks on children,” UNICEF said.

UNICEF also condemned the killing of a 12-year-old boy who was beheaded on-camera in Aleppo this week by a Syrian rebel group.

The Nour el-Din al-Zinki group, which has so far been known as a relatively moderate group that fights the Syrian government and the Islamic State group, called the killing of the Palestinian boy an “individual mistake” and said it will open an investigation into his murder.

In Geneva, the U.N. Humanitarian aid adviser Jan Egeland appealed for 48-hour localized truces across Syria to allow in aid. He said the U.N. got authorization from the Syrian government to deliver aid to all 18 U.N.-designated besieged areas, but fighting is keeping them from making deliveries

“We are hopeful that intensive diplomatic activities will lead to access to eastern Aleppo,” he said of the now besieged rebel-held part of the city of Aleppo.

Egeland also said there are “intensive discussions” underway about how to help some 100,000 people who have been stuck for weeks at the Syrian-Jordanian border. “We are hopeful that we will be able to supply them with food and other necessities soon, either from within Syria or from Jordan,” he said.

Tens of thousands of people have been stuck in the area known as the “berm” for its earthen mounds, after Jordan closed the border following a car bombing last month that killed seven Jordanian soldiers near the Rukban crossing point.

Doctors Without Borders on Thursday called for the evacuation of war-wounded Syrians through Jordan’s sealed northern border. The international medical humanitarian organization said it has not treated any war-wounded Syrians in the emergency room in the Ramtha Government hospital — located about 5 kilometers (3 miles) from the Syrian border — since the closure of Jordan’s northern border following the deadly June 21 suicide attack.

“The closure of the borders means that the most vulnerable victims of the conflict — those badly injured by the war — no longer have the chance to survive,” said Luis Eguiluz, MSF’s head of mission in Jordan.