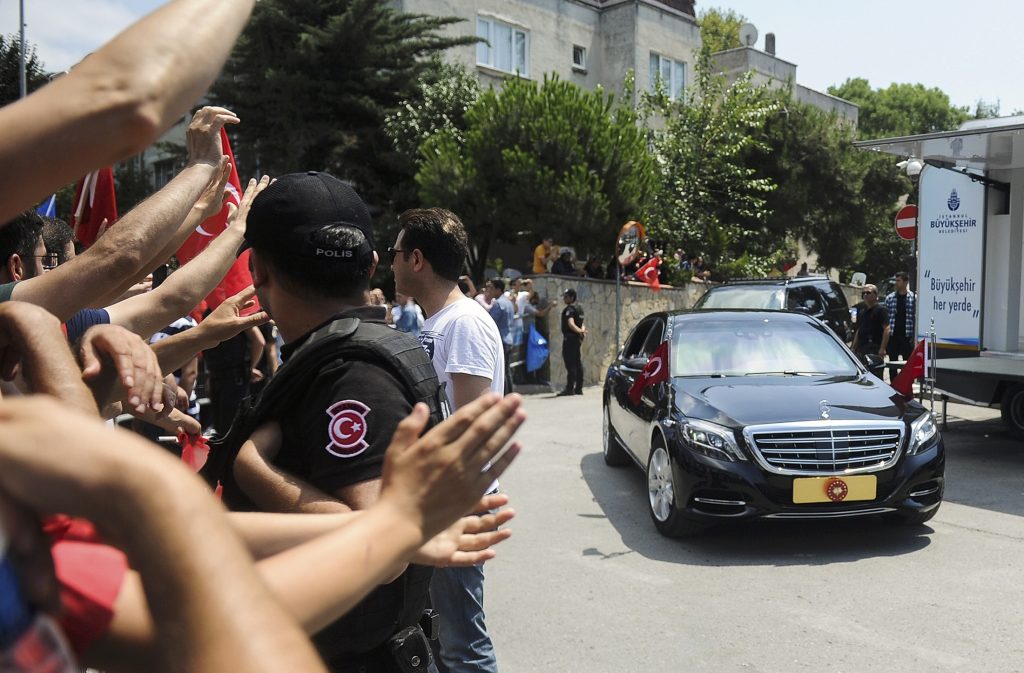 Turkey widened a crackdown on suspected supporters of a failed military coup on Sunday, taking the number of people rounded up in the armed forces and judiciary to 6,000, and the government said it was in full control of the country and economy.

The violence shocked the nation of almost 80 million, once seen as a model Muslim democracy, where living standards have grown steadily for more than a decade and where the army last used force to stage a successful coup more than 30 years ago.

It also shattered fragile confidence among Turkey’s allies about security in the NATO country, a leading member of the U.S.-led coalition against Islamic State. Turkey had already been hit by repeated suicide bombings over the past year and is struggling to contain an insurgency by Kurdish separatists.

Authorities have rounded up nearly 3,000 suspected military plotters, ranging from top commanders to foot soldiers, and the same number of judges and prosecutors after forces loyal to Erdogan crushed the attempted coup on Saturday.

Among those arrested is General Bekir Ercan Van, Commander of the Incirlik Air Base from which U.S. aircraft launch airstrikes on Islamic State militants in Syria and Iraq, an official said.

“Control across Turkey has been restored and there are no clashes at the moment,” a senior official said, adding that although a few groups of coup plotters were holding out in Istanbul, they no longer posed a risk.

“There are still a few important soldiers on the run and being sought. I believe they will be captured shortly,” the official told Reuters.

The crackdown appears to intensify a longstanding push by Erdogan to root out the influence of followers of U.S.-based cleric Fethullah Gulen.

Erdogan accuses followers of Gulen, who was once an ally but is now his arch-enemy, of trying to create a “parallel structure” within the courts, police, armed forces and media with the goal of toppling the state.

The cleric denies the charge and says he played no role in the attempted coup, denouncing it as an affront to democracy.

Overnight, supporters of President Tayyip Erdogan rallied in public squares, at Istanbul airport and outside his palace in a show of defiance after the coup attempt killed at least 265 people.

At a rally late on Saturday, his supporters demanded that the coup leaders be executed. “Let’s hang them!” chanted the crowd in Ankara’s central Kizilay Square. Erdogan told them that parliament may consider a proposal to bring back the death penalty, which has been abolished.

Erdogan supporters waving Turkish flags also thronged the central Taksim square in Istanbul – scene of mass anti-government protests three years ago – and a smaller crowd gathered outside the gates of his vast presidential palace complex in the capital.

Erdogan promised a purge of the armed forces even before the coup attempt was over. “They will pay a heavy price for this,” he said.

With expectations growing of heavy measures against the dissent, European politicians warned Erdogan that the coup attempt did not give him a blank check to disregard the rule of law, and that he risked isolating himself internationally as he strengthens his position at home.

Some European politicians have expressed their unease about developments since the coup attempt.

“We want the rule of law to work fully in Turkey,” said French Foreign Minister Jean-Marc Ayrault. “(The coup attempt) is not a blank check for Mr. Erdogan. There cannot be purges, the rule of law must work,” told France 3.

Ayrault said European Union ministers would reiterate on Monday when they meet in Brussels, that Turkey – which has applied to join the bloc – must conform to Europe’s democratic principles.

Erdogan’s critics say he will use the purge to create a pliant judiciary, eliminating any dissenting voices in the courts.

European Commissioner Guenther Oettinger said Erdogan would move Turkey away from the core values represented by the EU and the NATO defense alliance – of which it is a long-standing member – if he decided to use the attempted coup to restrict basic democratic rights further.

“He would strengthen his position domestically, but he would isolate himself internationally,” Oettinger, an ally of German Chancellor Angela Merkel, told Welt am Sonntag newspaper.

Some European politicians are also expressing concern about the future of the deal between the EU and Ankara that has helped to slow the numbers of migrants crossing from the country to neighboring Greece.

U.S. President Barack Obama has also urged parties on all sides of the crisis to avoid destabilizing Turkey and follow the rule of law.

A successful overthrow of Erdogan, who has ruled the country since 2003, would have marked another seismic shift in the Middle East, five years after the Arab uprisings erupted and plunged Turkey’s southern neighbor Syria into civil war.

But the failed attempt could still destabilize the U.S. ally, which lies between Europe and the chaos of Syria.

Erdogan’s Islamist-rooted AK Party has long had strained relations with the military, which has a history of mounting coups to defend secularism although it has not seized power directly since 1980.

His conservative religious vision for Turkey’s future has also alienated many ordinary citizens who accuse him of authoritarianism. Police used heavy force in 2013 to suppress mass protests demanding more freedom.

Nevertheless, Erdogan commands the admiration and loyalty of millions of Turks, particularly for raising living standards and restoring order to an economy once beset by regular crises.