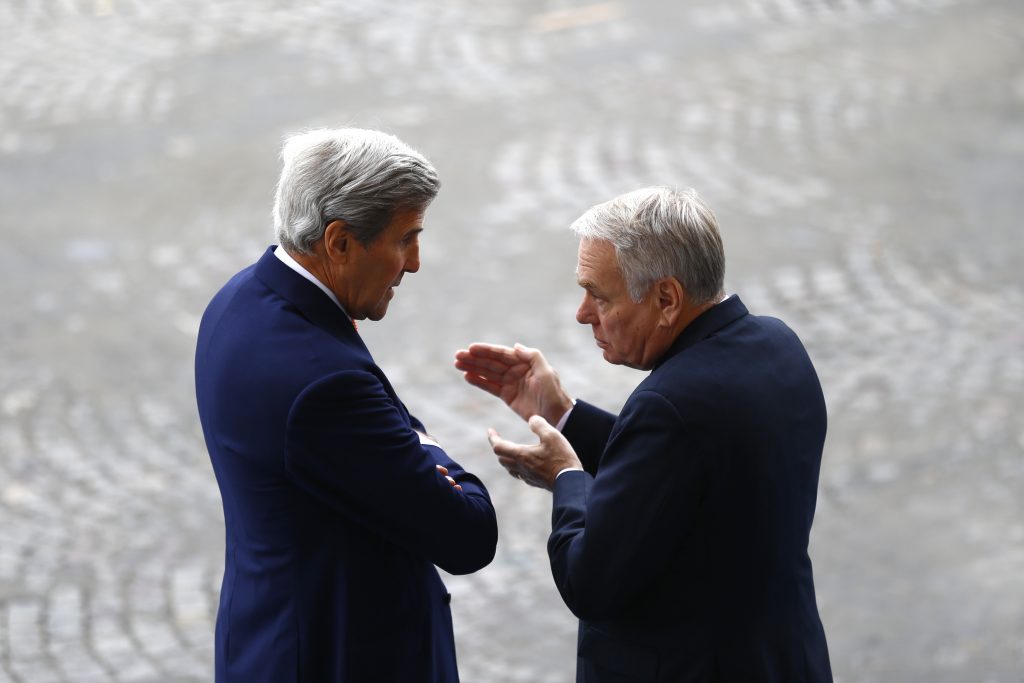 Secretary of State John Kerry on Thursday lauded the Iran nuclear deal on its one-year anniversary, saying it has so far defied dire predictions and instead made the world a safer place.

Kerry also said it underscored the value of diplomacy, a success he is hoping can be replicated as he heads to Moscow for talks with Russian President Vladimir Putin seeking to coordinate airstrikes in Syria.

“As of today, one year later, a program that so many people said will not work, a program that people said is absolutely doomed to see cheating and being broken and will make the world more dangerous, has in fact made the world safer, lived up to its expectations and thus far produced an ability to create a peaceful nuclear program with Iran,” Kerry told reporters before leaving to attend a Bastille Day parade.

“The world is safer today because conflict in the region is not calculated on the basis of the potential of nuclear confrontation and nuclear explosion, and because we have the ability to be able to work through some issues,” he added, citing talks that freed U.S. sailors who entered Iranian waters and were released within 24 hours.

“That would not have happened prior to this agreement having taken place,” he said.

Kerry, however, declined to discuss ahead of his Moscow trip a leaked U.S. proposal to establish a joint operating command, possibly in Jordan, to exchange military and operational intelligence on Jabhat al-Nusra, an affiliate of al-Qaida fighting in Syria.

Russia and the United States are cochairs of an international group seeking to stop the war in Syria and get humanitarian aid to civilians. Kerry has expressed frustration with Russia’s inability or unwillingness to force the Syrian government led by Bashar Assad to stop bombing civilians and allow food and medical supplies through to stranded towns and villages.

A cease-fire, in effect for months now, has never taken hold as Syrian planes, sometimes joined by Russian planes, have kept up their offensive against both civilians and rebel strongholds. U.N.-brokered peace talks have stalled amid the continuing violence and deprivation.

Just hours before Kerry is to depart for Moscow, his third trip in the past 12 months, a senior State Department official criticized both Moscow and Damascus, blaming both for failing to stop the carnage.

“The reality is the Syrian regime has violated every commitment it has made – or that Russia has made on its behalf – and has squandered every opportunity to build confidence with the Syrian people,” said the official, speaking anonymously because the U.S. proposal to Russia has not been finalized. “In the meantime, the Assad regime continues to destroy its own country and people in order to cling to power.”

The official said Kerry would talk with Putin and Russian Foreign Minister Sergei Lavrov about focusing on combating the Islamic State and al-Qaida terror groups, allowing humanitarian access and setting the stage for a political transition to usher Assad out of power.

“We will not commit indefinitely to diplomacy that does not achieve real results,” the official said. “We cannot provide political cover for those seeking to pursue a different agenda.

“Russia’s significant military intervention gives it enormous responsibility for Syria’s future. It’s long past time that Russia decides whether it is serious about advancing such shared objectives in Syria.”

Kerry stopped in Paris to attend the annual Bastille Day parade at the invitation of President François Hollande. It is his 31st visit since he became secretary of state almost three and a half years ago.

What Kerry considers one of his signature achievements was completed in Paris, the international climate change agreement reached in December.

And as Kerry himself noted in his remarks on the Iran deal, he has come to Paris twice since then to offer condolences to the French after terrorist attacks –  once after an assault against cartoonists at the satirical magazine Charlie Hebdo and again after attacks on the Bataclan hall and other venues.

On the eve of his trip, Kerry attended a State Department reception celebrating Eid al-Fitr, marking the end of the Muslim fasting month of Ramadan, and vowed to keep seeking a path to peace in Syria.

“We will pursue a political solution that is essential in order to halt the violence and enable families to return to their communities and rebuild their lives,” he said. “And no one – but no one – has explained to me any rationale for how there is anything except, ultimately, a political settlement to this war.”