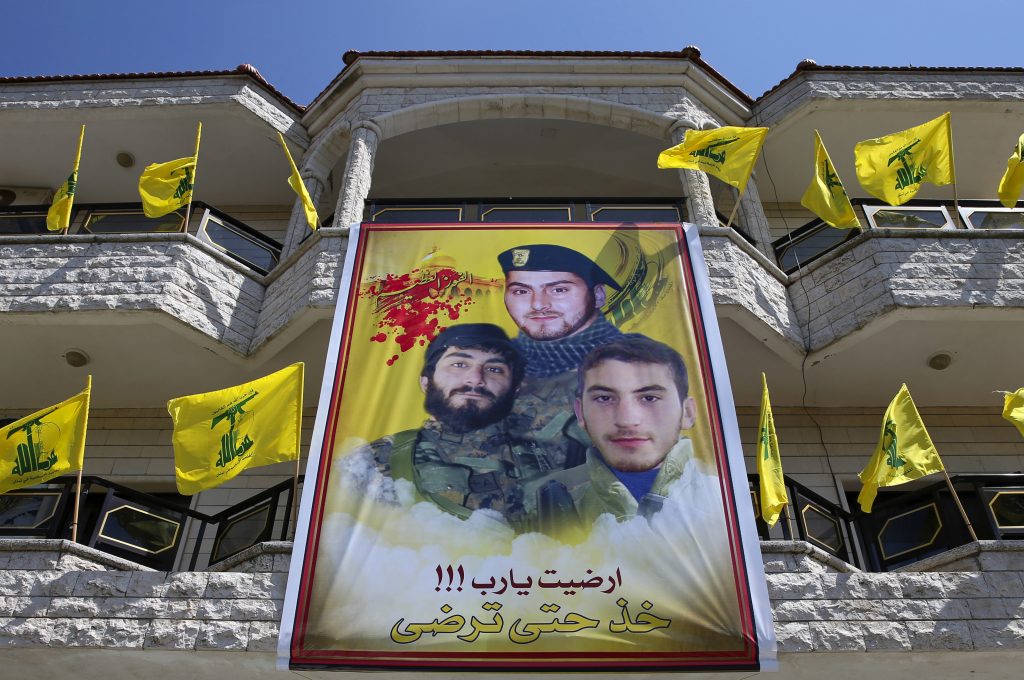 In front-line villages of south Lebanon, the posters of Hizbullah members killed fighting Israel 10 years ago still stand, but have faded. Now rising up around them is a new generation of posters, bearing the faces of young fighters from the terrorist group killed in Syria.

They reflect the Shiite group’s radical shift from decades fighting Israel, a cause that at one time earned it soaring popularity across the Arab and Muslim world, to the far less popular role fighting fellow Arabs in defense of Syria’s president, Bashar Assad.

It is a venture that is proving costly. The war in neighboring Syria is bleeding Hizbullah of fighters and experienced military commanders, and has left the group more vulnerable to accusations of complete subservience to Iran, which rallied Hizbullah to intervene in the war. So far, more than 1,000 of the group’s fighters, including several founding members, have been killed in Syria, a toll higher than the one incurred by the group in nearly two decades of fighting Israeli forces.

Hizbullah’s involvement in Syria has also changed the public discourse around the group in the Arab world. At home in Lebanon, its domination of politics is unshaken: With a bloc of allies in the Cabinet and parliament, it vetoes any decisions it doesn’t approve of, including preventing parliament from electing a new president. But it is much more openly criticized. Public opinion is sharply polarized among those who see the group as dragging Lebanon into the Syria morass, and others who support it.

“I think that we’re seeing rumblings of discontent. I mean some families obviously aren’t happy. We’ve heard a lot of stories about families saying why are our kids dying in Syria, we can understand them dying in the fight against Israel but why are they dying in the fight in Syria,” said Maha Yahya, director of the Carnegie Middle East Center in Beirut.

But whatever criticism of Hizbullah exists among Lebanese Shiites, it tends to remain inside the Shiite community. Public support for the group so far appears intact because the majority of Shiites still see supporting Assad, a member of the minority Alawite sect that is an offshoot of Shiite Islam, as crucial and vital to their interests.

That’s in part because of how Hizbullah frames the war to its supporters. The group has depicted itself as battling Sunni extremists intent on wiping out Shiites, arguing it must fight them in Syria to keep them away from Lebanon. It also calls the war an extension of its fight against Israel, saying that Syria is under attack from Western powers seeking to eliminate Assad as a “center of resistance” to Israel.

“Syria has been the worst imaginable piece of news for Hizbullah. A challenge that has transformed the party into something it does not want: the perception of a Sunni killer,” said Bilal Saab, a senior fellow for Middle East Security at the Atlantic Council.

It is difficult to measure sentiment within Hizbullah, a highly secretive and disciplined organization. On the 10th anniversary of the 2006 war with Israel, an Associated Press team gained rare access into the homes of slain fighters in south Lebanon, where relatives grieved but said they supported the group’s justifications for fighting in Syria.

In one home, the socks and boots stained with the blood of a Hizbullah fighter killed in 2006 are on display in the sitting room of his parents’ house. In another, the military uniform worn by a fighter killed in Syria lay on his bed, laid out carefully by his grieving mother.

“Khalil was my soul but I won’t hide my son and say, let other people send their children,” said Hanan Ibrahim, whose son Khalil was killed near Damascus on Dec. 27, 2013. “He should go (fight in Syria), and my other son, too, and if I had a third son I would also send him,” she said, speaking in her living room, decorated with a giant picture of her son Khalil on a front line in Syria.

Hizbullah’s popularity across the Arab world and in Lebanon had taken a major hit beginning in 2005, when it was accused by some of being behind the assassination of former Lebanese Prime Minister Rafik Hariri with a massive bombing in Beirut. In 2008, the group briefly seized several Sunni neighborhoods of west Beirut after the government closed down its secret telecommunications network, pointing its weapons internally for the first time since the end of Lebanon’s 1975–90 civil war.

Hizbullah’s involvement in the Syrian war has, according to its critics, left the group looking even more like an Iranian tool fighting for its own self-interest.

It is a far cry from back in 2000, when Hizbullah was celebrated across much of the Arab world, including among Sunnis, for its guerrilla campaign that eventually forced Israeli troops to pull out of a slice of southern Lebanon they had occupied for 18 years. And despite some criticism, the group was supported by the majority of Lebanese during the 2006 war with Israel, which began with a cross-border Hizbullah raid that kidnapped two Israeli soldiers, triggering a massive Israeli air and ground campaign.

The 2006 fighting killed about 1,200 Lebanese, including hundreds of civilians, and about 160 Israelis, mostly soldiers. The war failed to neutralize the group’s rocket threat, and Israeli officials say Hizbullah’s improved missile arsenal is now capable of striking virtually anywhere in the country.

Israeli political and military leaders, however, say that the war succeeded in re-establishing Israeli deterrence and provided a decade of quiet on its northern front — and gleefully note that the group’s leader Hassan Nasrallah is still in hiding 10 years later.

Israeli officials also acknowledge that as a group, Hizbullah is amassing more combat experience and has more than replenished its arms via smuggling from Syria. That pipeline is one key reason why preserving the existing Syrian regime is seen as so existential for Hizbullah.

In the front-line village of Aynata, only few miles away from the Israeli border, residents vividly recall the 2006 war. The village was heavily damaged by Israeli airstrikes and ground fighting between Israeli soldiers and Hizbullah fighters. Fourteen Hizbullah fighters and 28 civilians were killed.

Since Hizbullah began sending fighters to Syria in 2012, six other fighters from the village have died.

“What is common between these two wars is that they are existential wars against Hizbullah, and to be more precise, it is a war against Shiites,” said Hisham Khanafer, whose two younger brothers, Moussa and Abbas, were killed — one fighting Israel in 2006 and one in Syria last year.

Abbas, who was 25, had planned to marry his fiancée as soon as he returned from Syria. Moussa was 29, his third daughter born on the day he was killed.

Khanafer wears a yellow shawl, the color of the Hizbullah flag, with portraits of his slain brothers on each side. “Every war has a price,” he says.

Hizbullah first began sending fighters in small numbers to Syria in 2012, to help protect Shiite shrines near the capital, Damascus, and has gradually escalated its involvement, dispatching fighters to ever more distant places to shore up the battered forces of Assad. Nearly 30 Hizbullah fighters were killed in one single battle around the city of Aleppo near the Turkish border last month.

“For Israel, this is a dream scenario. All its enemies are killing each other in Syria… without them having to fire a bullet or place even one soldier in the line of fire,” said Yahya of the Carnegie Middle East Center.

She said although Hizbullah’s overall control is not as tight as it used to be, the group is nowhere near a breaking point yet.

Aron Heller in Yerushalayim contributed to this report.