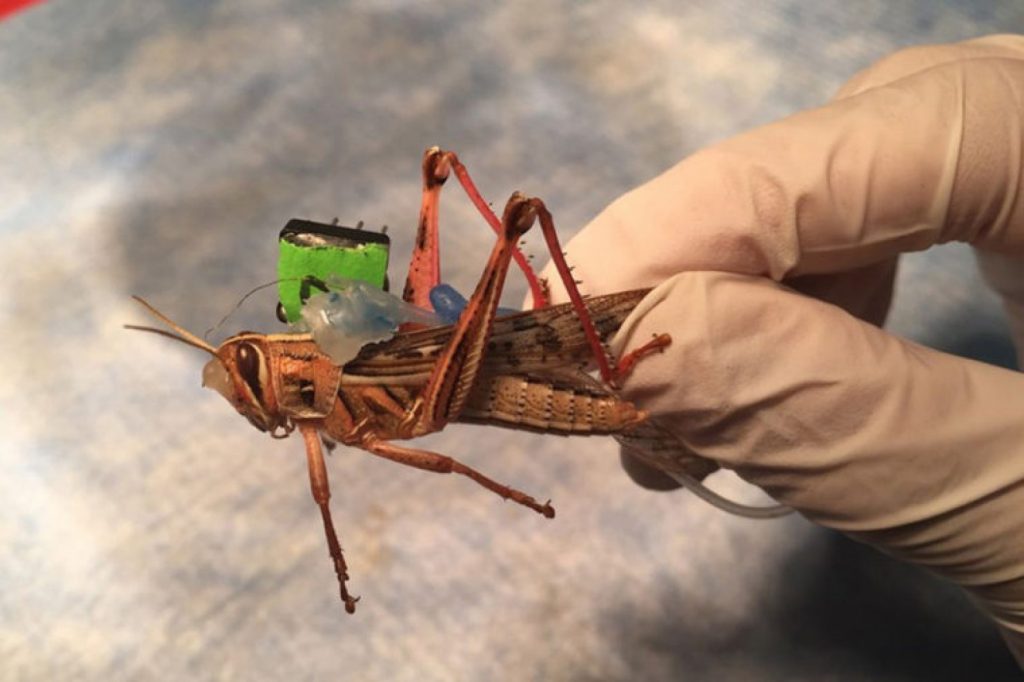 Locusts came to fame as agents of destruction during the eighth plague of Egypt in the Bible, but some researchers envision a new occupation for the humble insects: cyborg bomb detectors.

Yes, you read that correctly. The Office of Naval Research has given Washington University in St. Louis associate biomedical engineering professor Baranidharan Raman and his team a $750,000, three-year grant to continue his research into turning ordinary locusts into military tools.

The idea is simple, even if the execution is not. Like most insects, locusts are equipped with an exponentially more powerful and sensitive olfactory system than anything humans can artificially replicate – so why not use this preexisting system to hunt for bombs, rather than attempting to create what will inevitably be a pale imitation?

“Why reinvent the wheel? Why not take advantage of the biological solution?” Raman said in a news release. “That is the philosophy here. Even the state-of-the-art miniaturized chemical sensing devices have a handful of sensors. On the other hand, if you look at the insect antenna, where their chemical sensors are located, there are several hundreds of thousands of sensors and of a variety of types.”

In other words, locusts are great at smelling things, even when a certain scent might seem masked by many others.

“It took only a few hundred milliseconds for the locust’s brain to begin tracking a novel odor introduced in its surroundings,” he told the BBC. “The locusts are processing chemical cues in an extremely rapid fashion.”

So the first step is harnessing those antennae. And that requires the implantation of sensors, which can record and decode certain neural activity, into the locusts’ brains.

“We can do a surgery on [the locusts] and implant these electrodes into their brain,” Raman told KMWU-FM. “Within a few hours, they can recover and they can walk and behave as if nothing had happened.”

These sensors have been used in Raman’s research, but for the locusts to be useful in the field, they’ll need to be mobile.

The plan is to hook those sensors to a small “backpack,” which will contain a transmitter to send signals to a receiver hooked up to an LED. If there are explosives, it will light up red. If there aren’t any, the light will shine green.

That, though, will be only half of the battle during the next three years. The other half will be actually learning how to guide locusts to the areas that might contain bombs.

That’s where the tattoos come in.

Fellow Washington University professor Srikanth Singamaneni, whose focus is materials science, will be working to create a “tattoo” made from biocompatible silk that could convert light into heat, according to Engadget. These would be placed on the locusts’ wings so that a laser could be shined at them, heating part of the wing and essentially forcing the insect to fly one way or another. If the laser is shined at the left wing, the locust would go left, for instance.

A prototype of the bomb-sniffing locust is expected within a year, KWMU reported.

These locusts might sound far-fetched, and much work is needed to make them a reality. But Raman can already decode some of locusts’ neural patterns on smell. And we’ve long used animals to find unsavory items – mine-detecting dolphins, spying sea lions and sniffer dogs, to name a few.

And “mind-control” of an insect isn’t new, either. Though People for the Ethical Treatment of Animals effectively helped stamp it out, there was once an app that – along with some living room surgery involving super-gluing electrodes where antennae used to be, allowed control over the actual movements of a cockroach.

Raman said he is not as concerned with the practical battlefield usage of the locusts at this point – the team is currently focused on reaching a point where that’s a concrete concern. But, at the tune of three-quarters of a million dollars, the Navy certainly seems invested in the idea.