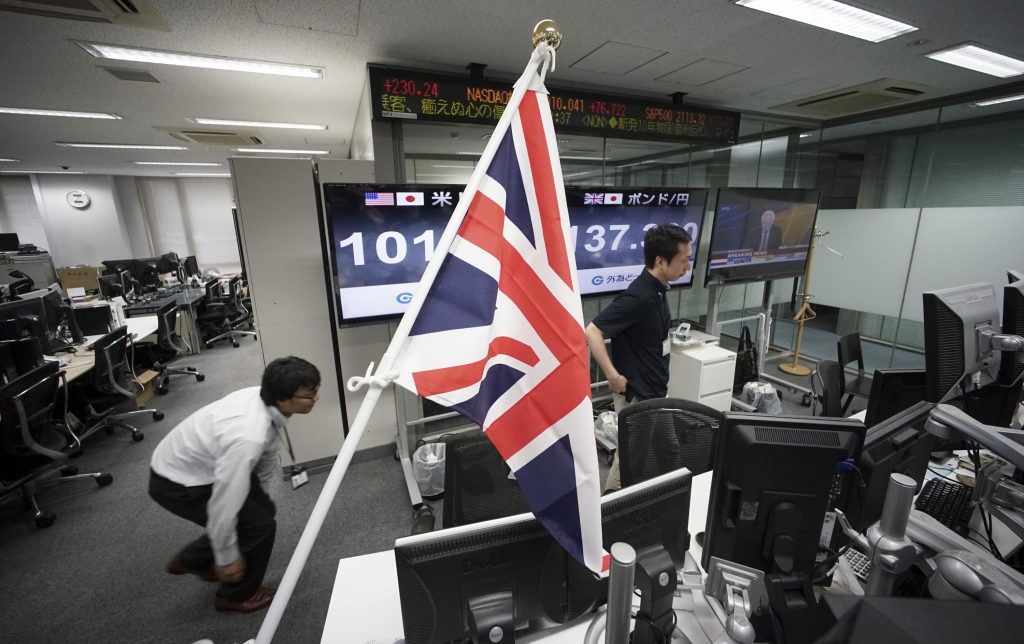 The pain of Britain’s European divorce radiated around the globe on Friday, blowing up a storm in financial markets that may take time to die down and retarding prospects for a recovery in world trade.

Sterling’s steepling fall to 30-year lows showed investors saw the British vote to quit the European Union as a self-inflicted wound, but economic casualties could spread far and wide.

“The global economy was fragile before and is more so today,” Citi economists said in a report.

Markets, caught off guard by the result, pushed back the expected timing of rate rises by the U.S. Federal Reserve and tried to work out if the Bank of England and other central banks would ease to shore up their economies.

“In the real economy, global GDP is definitely going to be affected, U.S. GDP, Japan GDP, GDP everywhere!,” said Bob Takai, President at Sumitomo Corp Global Research in Tokyo.  “So I think it’s going to be difficult for the Fed to raise rates. No rate hikes this year and maybe the Fed is going to have to think about their whole monetary policy.”

Japan, which wants a weaker yen to break free of recession, felt the impact immediately.

The yen, regarded as a safe haven currency, surged past 100 per dollar to its strongest in 2½ years and stocks fell more than 8 percent during trade on Friday.

China’s yuan slumped to its lowest in more than five years, with the central bank thought to be intervening to sell dollars.

“From an investment perspective it’s the last thing the global economy needed because of the uncertainty that it’s going to add in to what’s already been a volatile year,” said Savanth Sebastian, an economist at Comsec in Sydney.

The yen’s gains intensified the concerns of Japanese policymakers, who want a weaker currency to support exports and their deflation-hit economy. So far, Japan has been unable to garner support from other major countries, most notably the United States, for intervention to weaken the yen.

It was unclear if that would change even as Tokyo signalled on Friday it was ready to act.

“It is extremely important to ensure growth in the global economy, as well as maintaining currency and financial stability.”

Any unliateral action by the Japanese could run the risk of triggering competitive devaluations by rival export-focused economies, vying for market share at a time when world trade was slowing.

Ratings agency Standard & Poor’s said the United Kingdom was likely to lose its AAA credit rating, the Financial Times reported, and economists said if the transition – including negotiating trade deals with the EU and other countries – was not smooth then Britain risked falling into recession next year.

But despite the market ructions, many said the Leave vote was not a moment equivalent to the 2008 collapse of Lehman Brothers that could tip the world economy back into crisis.

“Financial markets will likely react in an aggressive manner this morning and the world has changed, but from a market perspective this is not a systemic Lehman moment,” Exane BNP Paribas analysts said in a report.

“It is politics where the main uncertainty now lies, with central bank response also important.”

One of the biggest challenges for Britain will be to reach stand-alone trade deals in the time frame of about two years to manage its withdrawal, given such negotiations often take much longer.

“These processes and their eventual outcomes could well remain unresolved for years, weighing heavily on investment and economic sentiment during the interim and depressing output,” the International Monetary Fund said in a report last week ahead of the vote, saying it could potentially tip Britain into recession.

Indonesia is currently negotiating a trade deal with the European Union, and Darmin Nasution, coordinating minister for economics said Brexit would be a manageable complication.

“We’re in the middle of a negotiation for a trade pact with the EU. If Britain wants out, it will not be part of that pact. We will have to make a separate trace pact with it,” Nasution said. “But there should be no problem in exports, we will still be able to export there.”