By Anna Douglas and Christopher Huffaker 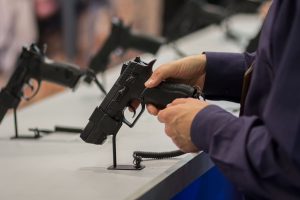 Fewer than 5,000 people would have been directly impacted by this week’s failed post-Orlando effort in the U.S. Senate to restrict gun sales to suspected terrorists on watch lists.

More people could be inconvenienced or mistakenly delayed in buying a gun under so-called “no-fly, no-buy” proposals because of errors on the government’s various watch lists.

Republican and Democratic senators were gridlocked this week over legislation that would seek to keep suspected terrorists from buying guns or to warn federal officials if those people tried to buy a gun. Some lawmakers raised concerns about such measures infringing on the Second Amendment right to own a gun.

However, the number of people on terror watch lists who currently have gun rights is low.

With few exceptions, only U.S. citizens and legal residents in the country on immigrant visas can buy a gun. The FBI estimates that less than one percent of people on watch lists are U.S. persons, meaning citizens or those living legally in the United States.

The number is imprecise because government terror watch lists aren’t public, and federal officials have been reluctant to say how many Americans are on the “no-fly” list. The number also fluctuates as officials add and remove suspected terrorists from the list — which in some cases is done when a list error is discovered.

To further complicate finding an exact number, there’s no official estimate of how many U.S. citizens or residents on government watch lists already are prevented from buying a gun because of some other legal disqualifier — for example, a history of mental illness or a felony conviction.

Still, 5,000 may be a good starting point to understand the potential scope that a “no-fly, no-buy” or similar proposal related to watch lists could have.

The FBI defines the remaining 99 percent of people on the terror watch list as “non-U.S. persons” but hasn’t said publicly whether any of those people are known to be living in the United States without documentation.

The FBI estimates there are about one million total identities on its consolidated terror watch list. And 5,000 or fewer of those people — about 0.5 percent — are U.S. citizens or legal residents. Five years ago, the number was 8,400, or 2 percent, of a total 420,000.

Other data show that American citizens or legal residents on terror watch lists largely have been able to buy guns legally in the past. The Government Accountability Office said in March that in the past 11 years, 91 percent of the 2,477 people on a watch list who wanted to buy a gun successfully passed background checks at the point of sale for a gun or explosive. Since 2004, just 212 U.S. persons named as suspected terrorists on the list failed gun background checks, according to the GAO report.

That figure suggests that most citizens or residents who fall on the watch list and want to buy a gun could legally do so unless Congress passes a new law to stop them, said Sen. Chuck Schumer (D-N.Y.) last week, flanked by other Democrats in Congress.

Aside from contention over whether watch lists should serve as a way to restrict gun sales to some Americans, the data on the lists themselves are controversial due to past errors. That’s one reason Republicans have raised concerns about Democrats’ attempt to lay gun control measures over suspected terrorist lists.

The government’s lists use first and last names or initials, not unique identifiers for the population.

So, one can end up being questioned or stopped at an airport because of an unfortunate name doppelganger. Former U.S. Sen. Ted Kennedy; Georgia Congressman John Lewis; Yusuf Islam, the singer-songwriter formerly known as Cat Stevens; and lots of toddlers have had this problem.

Other problems with list data have been well documented.

Still, that was an improvement by the FBI over five years prior, when an audit of the watch lists showed almost all removals were “untimely.” In 2009, auditors found that, in one case, it took almost five years for a person cleared of suspicion to be removed.