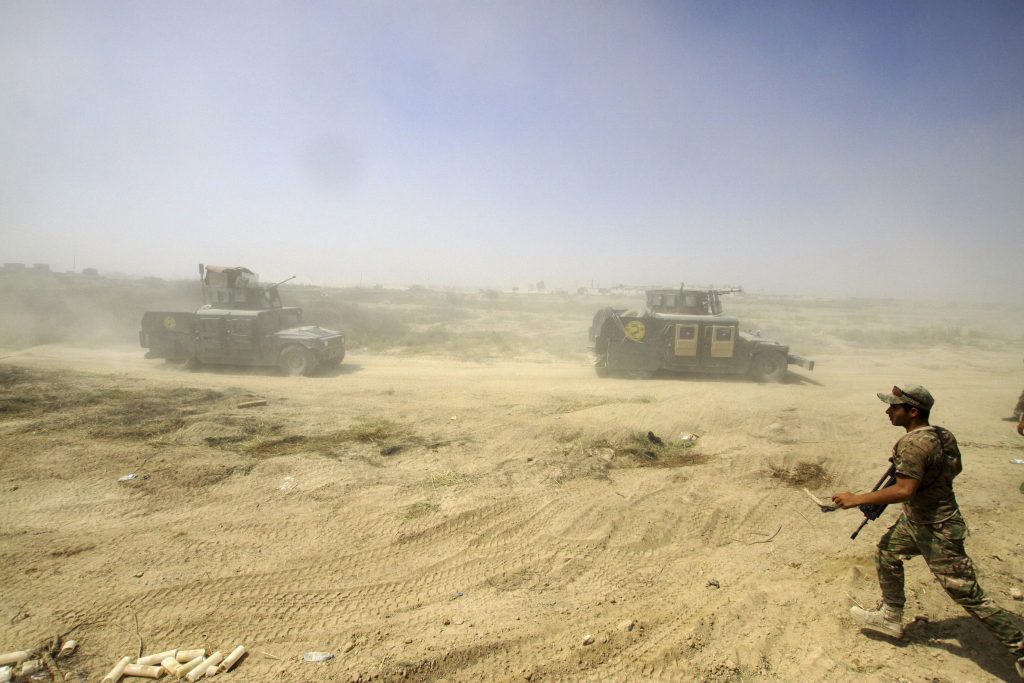 The sound of gunfire and explosions echoed through Fallujah’s streets Saturday as security forces battled to oust the remaining terrorists a day after Iraq declared victory over the Islamic State in the city.

Iraqi special forces recaptured the city’s main hospital, which had been used as a base by the enemy, storming it in the afternoon, but the fight here is not over. Intercepted Islamic State radio communications, which crackled over a walkie-talkie in a base for Iraqi special forces, showed the terrorists were still resisting.

“I can see about twenty Humvees next to Hajji Hussein,” said the voice of an Islamic State commander referring to a popular Fallujah kebab shop. He ordered a suicide bomber in a Humvee to attack them.

“Go, may G-d be with you,” another terrorist said to the attacker. “All your brothers are listening.”

Special forces officers radioed to alert the joint command center, which notified the federal police forces that were gathered there, but the Humvee exploded.

Nonetheless, commanders say that the Islamic State’s grip on this city has crumbled and that the Iraqi flag flies over its local council building. It is one of a string of successes for Iraq’s elite forces, as cities held by the Islamic State fall one by one. Ramadi, Hit, Rutbah and now Fallujah.

Victory here holds special resonance. The first city in Iraq or Syria to fall to the terrorists 2 1/2 years ago, Fallujah is both a strategic and symbolic loss for the terror group. Known as the City of Mosques, with its skyline punctuated by minarets, Fallujah is of significance to Sunni Muslims, the branch of Islam the terrorists claim to represent. The city also lies 40 miles west of Baghdad and so had given the terrorists a foothold near the capital.

“It’s considered the capital of the Islamic State,” said Brig Gen. Haider al-Obeidi, a special forces commander, as he walked through a neighborhood recently controlled by terrorists. “Since the fall of Saddam Hussein’s regime in 2003, it’s been a base for terror cells.”

It was in Fallujah that U.S. forces saw the fiercest fighting of the Iraq War, clashing with Islamic State predecessor al-Qaida in Iraq in the city’s streets 12 years ago. Now, with the help of U.S.-led coalition airstrikes, the Iraqi government appears to have regained the upper hand here.

But defeating the terrorists comes at a cost, with hundreds of thousands of people displaced and cities left in ruins.

“They were hiding in these streets, using snipers and car bombs,” said Lt. Gen. Abdelwahab al-Saedi, commander of the Fallujah operation, pointing down a road lined with squat, sandy buildings and downed utility poles – the front line of the battle just five days ago.

The first days of fighting were the hardest, he said, as Iraq’s special forces penetrated defenses that the Islamic State had had more than two years to build. The terrorists had dug networks of tunnels and planted explosives on roads and in houses.

Several neighborhoods have yet to be secured, although Prime Minister Haider al-Abadi on Friday declared the Islamic State defeated in the city. The northwestern Jolan neighborhood is still under the control of the terrorists, and no one is sure how many civilians remain trapped there.

In the desert south of Fallujah, aid agencies have struggled to provide assistance to those fleeing. At least 20,000 people left the city in the 48 hours before Saturday morning as the Islamic State abandoned checkpoints that had prevented residents from leaving, according to the Norwegian Refugee Council.

Saedi said he expects the city to be fully secured soon. Then attention will turn north to Mosul, the Islamic State’s de facto capital in Iraq. The Iraqi military announced a new operation south of Mosul on Saturday, pressuring the terrorists on another front.

The next target is the town of Gayara in Salahuddin province, the military said. Islamic State-held towns such as Gayara need to be secured before Iraqi security forces can launch the main operation to retake Mosul, and battle plans must be coordinated between Baghdad and the semiautonomous government in the Kurdish-dominated northern region.

The faster-than-expected success in Fallujah has given some breathing space to Abadi, who was under political pressure as protesters demonstrated against his government, calling for reforms and measures to address corruption.

Islamic State fighters fled Fallujah’s hospital, which had taken longer than normal to recapture because launching airstrikes on the building was considered politically sensitive, commanders said. Saedi and Obeidi visited their troops there Saturday afternoon. They said no civilians were in the hospital when they reached it.

“What’s [left] of the battle now is a matter of hours,” he said as he returned from the front lines. But on the radio, terrorists could be heard urging their suicide bomber toward the police position.

Iraq’s federal police later claimed that there were no casualties in the suicide blast, although Iraqi security forces often play down death tolls. Earlier Saturday, two special forces soldiers were killed and another critically injured as a missile hit their Humvee. Another was shot in the leg by a sniper.

Jets roared overhead, and other car bombers advancing to attack were neutralized with airstrikes from the U.S.-led coalition before they could reach Iraqi lines.

“Most of them were killed by airstrikes,” Saedi said.