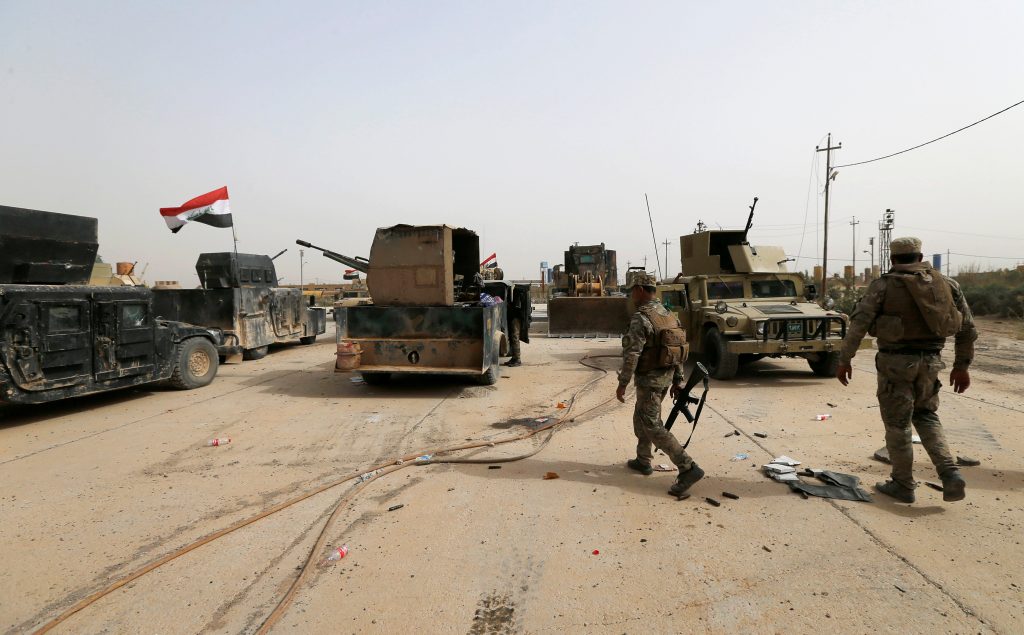 Iraqi forces opened a second front on Saturday in preparation for an assault on the Islamic State stronghold of Mosul, a day after government troops declared victory over the terrorists in Fallujah.

Elite counter-terrorism forces and two army divisions, backed by U.S.-led coalition air strikes, advanced from a northern refinery town towards an airfield seen as a key for a move to retake Mosul, security officials said.

Government troops cleared two villages and pressed around 12 miles along a desert route west of Baiji, the first advance past the town since its recapture in October, the security officials said.

Defense Minister Khaled al-Obaidi said the assault marked the launch of operations to push Islamic State out of Qayara, about 70 miles north of Baiji, where an airfield could serve as the staging ground for a future offensive on Mosul, a further 38 miles north.

Army troops on a separate front pushing west from Makhmour for the past three months have made only halting progress on the opposite side of the Tigris river.

“The launch of operations to liberate Qayara will not give the terrorists a chance to catch their breath,” Obaidi wrote on social media alongside a picture of Humvee military trucks snaking down a desert road.

Iraqi forces entered the center of Fallujah, an hour’s drive west of Baghdad, on Friday morning after a four-week operation that sent its tens of thousands of residents fleeing to overwhelmed displacement camps nearby.

Prime Minster Haider al-Abadi had declared victory in Fallujah by evening, but police sources said on Saturday that government troops had not yet entered several northern districts held by Islamic State and were still clearing southern areas.

Iraqi troops engaged the insurgents on Baghdad Street, the main east-west route through Fallujah, firing rockets at their positions and taking sniper fire and mortar rounds.

Counter-terrorism forces took control of Fallujah hospital, a nest for the militants who set fire to large parts of it before fleeing, and were clearing the eastern al-Dhubat neighborhood, a military statement said.

“It’s a long way from done,” said Col. Chris Garver, spokesman for the U.S.-led coalition. “There’s still a lot of work to be done in terms of clearing all the bad guys out of Fallujah and clearing IEDs (improvised explosive devices).”

Live footage broadcast on state media from outside the hospital showed smoke rising from the hospital and elite commandos celebrating with an Iraqi flag.

Fallujah, an historic bastion of the Sunni insurgency against U.S. forces that toppled dictator Saddam Hussein, a Sunni, in 2003, and the Shiite-led governments that followed, was seen as a launchpad for recent Islamic State bombings in the capital.

The International Organization for Migration said on Saturday more than 81,000 people had been displaced by the fighting in Fallujah, which had a population about three times that size before the Islamic State seizure in early 2014.

Two suicide car bombs were taken out by air strikes before reaching their targets, though dusty weather was making it difficult to target terrorists and slowing the advance, military sources said.

A spokesman for the U.S.-led coalition said Apache attack helicopters had conducted operations in support of Iraqi forces in the Tigris river valley, where the advance is situated.

The government forces were advancing along a desert path west of the main highway linking Baghdad to Mosul which is lined with mines and runs through villages that have a heavy Islamic State presence, said Col. Mohammed al-Assadi, an Iraqi army spokesman.

Senior officers in the counter-terrorism service have told Reuters the forces would not enter Islamic State strongholds in the area, such as Shirqat and Hawija, to avoid getting tied down in secondary battles.

The desert route also leads the troops further away from the Makhoul mountains east of Baiji, from which Islamic State has been launching mortars in and around the town for months.

Prime Minister Abadi has said Iraqi forces will retake Mosul this year but, in private, many question whether the army, which partially collapsed when Islamic State overran a third of the country in June 2014, will be ready in time.

The United States estimates that Islamic State has lost nearly half of the territory it seized in 2014.

Retaking Qayara and a nearby refinery with a production capacity of 16,000 barrels per day could also pinch Islamic State’s finances.