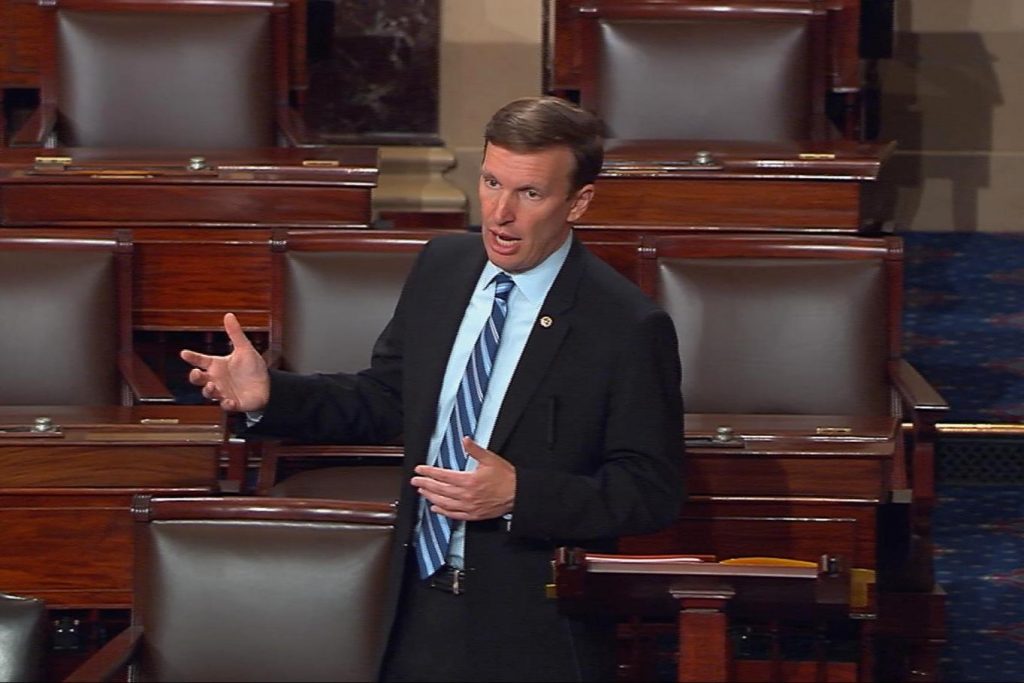 A Democratic senator launched a filibuster Wednesday to force a vote on gun control legislation three days after 49 people were killed at a nightclub in Orlando, Florida, in the worst mass shooting in modern U.S. history.

Connecticut Sen. Chris Murphy said he would remain on the Senate floor “until we get some signal, some sign that we can come together,” as he also evoked the Sandy Hook school shooting in his state in 2012. His plea came as presumptive Republican presidential candidate Donald Trump said he would meet with the National Rifle Association about the terror watch list and gun purchases.

“For those of us that represent Connecticut, the failure of this body to do anything, anything at all in the face of that continued slaughter isn’t just painful to us, it’s unconscionable,” Murphy said.

Twenty children and six educators died in the shooting at Sandy Hook Elementary School in Newtown, Conn., on Dec. 14, 2012. Murphy said he cannot look into the eyes of those children’s relatives and tell them that Congress has done nothing since.

Since the Sunday morning shooting in Orlando, Democrats have revived their push for gun control legislation but face fierce opposition.

The law increased the quantity and quality of records entered into the system, but the amount of money provided to help states improve their contributions has lagged well below what was originally envisioned.

Murphy is seeking a vote on legislation from Sen. Dianne Feinstein, D-Calif., that would let the government bar sales of guns and explosives to people it suspects of being terrorists. Feinstein offered the amendment in December, a day after an extremist couple killed 14 people in San Bernardino, California, but the Republican-run Senate rejected the proposal on a near party-line vote. He also wants a vote to expand background checks.

The Orlando shooter, Omar Mateen, was added to a government watch list of individuals known or suspected of being involved in terrorist activities in 2013, when he was investigated for inflammatory statements to co-workers. But he was pulled from that database when that investigation was closed 10 months later.

Republican presidential candidate Donald Trump said he would meet with the NRA to discuss ways to block people on terrorism watch lists or no fly lists from buying guns. That wouldn’t have blocked Mateen from buying a gun, however, since he’d been pulled from the watch list.

Sen. John Cornyn, R-Texas, said Wednesday that he and Feinstein were talking about a potential compromise between her bill and a version he has offered that would let the government delay firearms sales to suspected terrorists for up to 72 hours. Prosecutors would have to persuade a judge to block the transaction permanently, a bar Democrats and gun control activists say is too high.

In a statement, the NRA said it was happy to meet with Trump and reiterated its support for Cornyn’s bill.

Cornyn and other Republicans argue that Feinstein’s bill denies due process to people who may be on the terror list erroneously and are trying to exercise their constitutional right to gun ownership. Cornyn did not sound overly hopeful of reaching compromise with Feinstein.

“We’re trying, we’re trying,” he said. “But we’re not going to presume somebody’s guilty and deny them due process of law, we’re going to require the government to show some evidence and to provide for a constitutional process, that’s where we differ.”

“If they have something that’s decent we’ll work with them,” he said, but added that “this is not the end” of the issue for Democrats.

Everytown for Gun Safety, a gun control group backed by former New York City Mayor Michael Bloomberg, says it is also working on a compromise with Pennsylvania Sen. Patrick Toomey, a Republican in a tough re-election race this year who has sought compromise in the past on gun-control measures. A spokeswoman for Toomey would not comment on the talks.