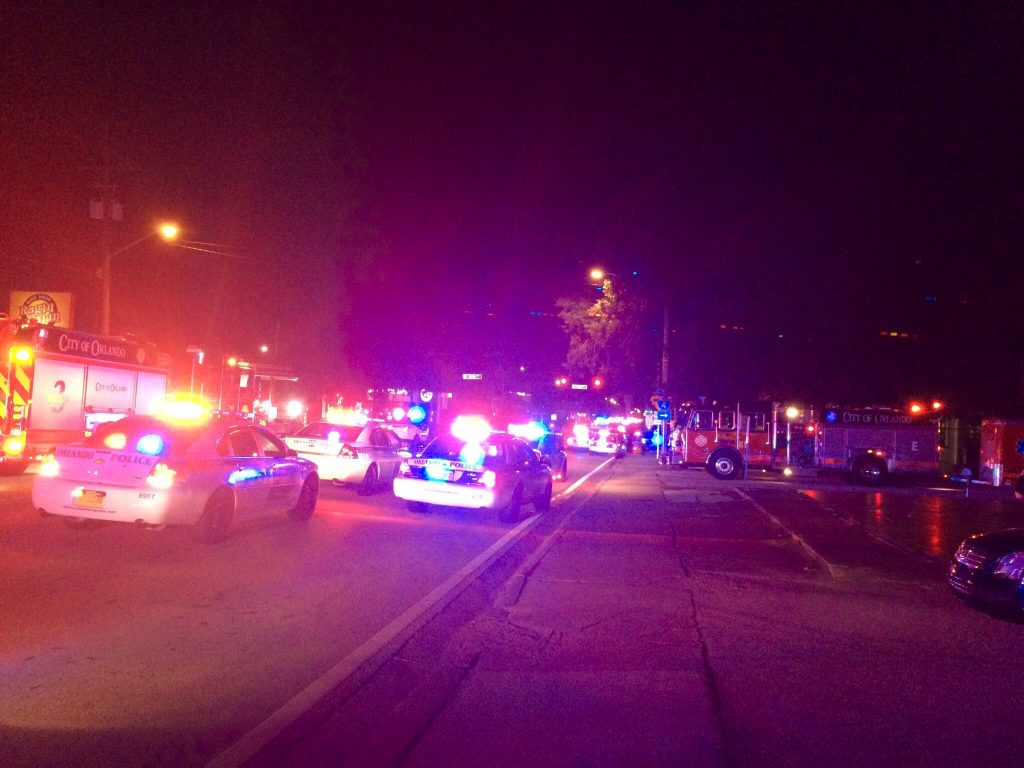 A Florida security guard twice investigated by the FBI for possible links to terrorism was the assault-rifle wielding gunman who opened fire on hundreds of unsuspecting people inside an Orlando club during predawn Sunday, killing 49 and wounding 53 more in the worst mass shooting in U.S. history.

The FBI confirmed that Omar Mateen, 29, was the attacker who took the club hostage for several hours, engaging in a gunbattle with more than a dozen officers before he was felled by police bullets.

The tragedy that unfolded throughout the day evoked the carnage and chaos that has punctuated recent terrorist attacks in Southern California, Paris and Boston — friends and rescuers carrying out bloodied victims, heavily armed police and tactical vehicles patrolling streets and thousands gathering to mourn victims in tearful candlelight vigils.

A somber President Barack Obama spoke to the nation in the afternoon, his sixth mass shooting address in the last year, and called the attack “an act of terror and an act of hate.”

At the epicenter of the deadly mass shooting, in a city synonymous with the American ideal of family vacations, Mayor Buddy Dyer pledged to fight back against the stain of violence that had been thrust upon his community.

“This is probably the most difficult day in the history of Orlando,” Dyer told reporters Sunday afternoon. “We will not be defined by a hateful shooter.”

On Monday, Islamic State claimed responsibility, in an official broadcast on the group’s Albayan Radio.

“One of the Caliphate’s soldiers in America carried out a security invasion where he was able to enter a crusader gathering … in Orlando, Florida … where he killed and injured more than a hundred [people] before he was killed,” the group said in its broadcast.

According to a law enforcement source who spoke with the Miami Herald, Mateen called 911 from the club to express support for Islamic State. At a news conference on Sunday afternoon, Orlando FBI Special Agent in Charge Ron Hopper would not confirm media reports that Mateen “pledged” allegiance to the terror group. But he did say that Mateen had twice come under FBI scrutiny.

Once in 2013, Mateen was alleged to have made “inflammatory comments” to co-workers regarding terrorism. But a “physical surveillance,” records checks and two interviews with Mateen led to no charges, Hopper said.

“We were unable to verify the substance of his comments,” Hopper said.

Then in 2014, the FBI again investigated Mateen for a possible relationship with American suicide bomber Moner Mohammad Abusalha, who killed himself in Syria in 2014. But the probe did not turn up concrete evidence, Hopper said.

Mateen had no criminal history in Florida and worked as a security guard with the company G4S.

Mateen was able to purchase both weapons legally days before the shooting, according to the Bureau of Alcohol, Tobacco, Firearms and Explosives.

“He is not a prohibited person, so he can legally walk into a gun dealership and acquire and purchase firearms. He did so. And he did so within the last week or so,” ATF Assistant Special Agent in Charge Trevor Velinor said Sunday in Orlando.

Born in New York to parents from Afghanistan, Mateen was a U.S. citizen who lived in the Fort Pierce and Port St. Lucie area, about 118 miles southeast of Orlando.

The scene of the violence was Orlando’s Club Pulse, where hundreds of people were gathered early Sunday. Police said Mateen opened fire around 2 a.m., taking scores of people.

The lights switched off, he said, and a guard knocked down a partition separating the club area from a space in the back where only employees were allowed — providing people inside with an escape route.

Just after 2 a.m., the club posted an ominous message on its social media page: “Everyone get out of ….. and keep running.”

Paramedics and heavily armed police in tactical gear rushed to the scene. Mateen, the shooter, remained inside for hours until, just before 6 a.m., police teams stormed the area.

Eleven Orlando officers opened fire, along with three Orange County deputies. Mateen was killed in the intense firefight. One Orlando officer was shot in the head — his Kevlar helmet saved his life; the department later posted a photo of the bullet-scarred helmet on social media.

Of the 50 victims who died from the shooting, 39 were killed at the site of the shooting and 11 people died at hospitals. One hospital patient was discharged, and all patients were identified.