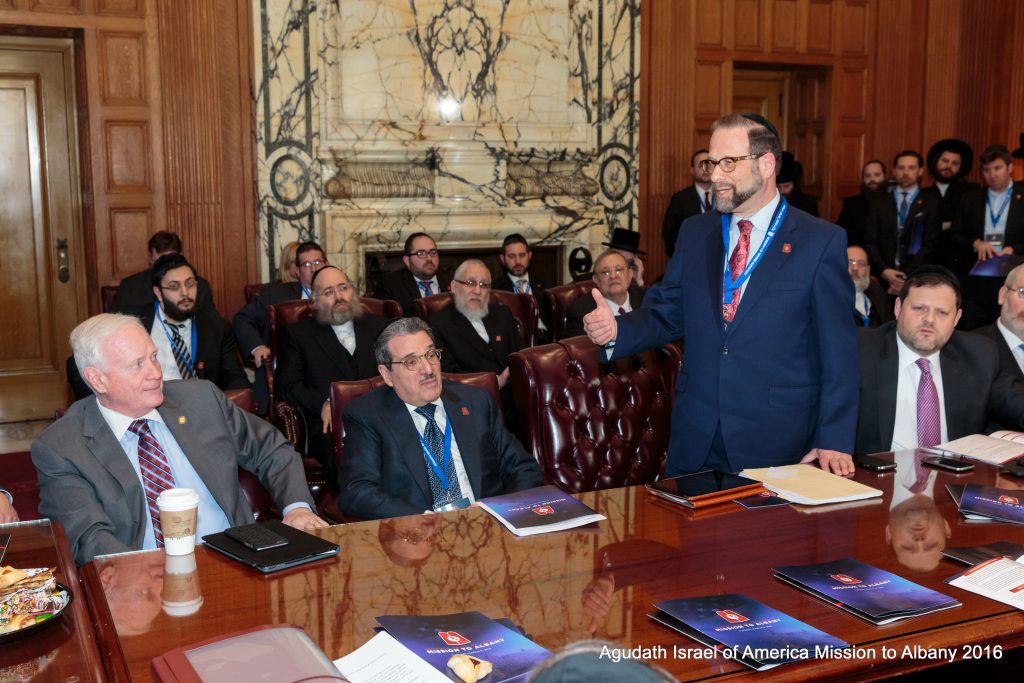 In a unanimous vote of 61 to 0, on Tuesday, June 7, 2016, the New York State Senate approved a measure, initiated by Agudath Israel of America, that is designed to significantly increase the level of reimbursement to nonpublic schools for their costs in complying with the state’s program for verifying and reporting the immunization status of their students.

New York State is required, by law, to reimburse nonpublic schools for certain mandated services, such as taking attendance, state testing, and monitoring and reporting immunization levels in their students. Senate Bill S7664, sponsored by New York State Senator Martin Golden, is one of two bills – one in the Senate and the other in the Assembly – intended to remove a cap in the New York State law that limits reimbursement to nonpublic schools for immunization costs under the mandated services program to no more than 60 cents a student.

For more than thirty years, the 60-cent limit has remained unchanged; however, rising staff costs and increasingly complex vaccination requirements put the actual expense of monitoring immunizations at a much higher level. According to detailed estimates arrived at by polling 63 schools across New York City, Buffalo and Rochester, nonpublic schools are currently incurring approximately $8 million of unreimbursed mandated services to comply with this statute.

If this bill passes in the Senate and Assembly, and the governor signs it into law, this cap will be removed and nonpublic schools will finally be reimbursed for the actual costs incurred, as required by law. The passing of this bill in the Senate is the first step in making this goal a reality.

“This is a very serious bill,” Senator Golden said. “The amount of money that the private schools are being paid is about 60 cents a child. This is not only not fair, but it’s a mandate. This bill gives private schools the ability to reappropriate the funding that it’s costing them now, to administer the shots, to their mission, which is the education of their children.”

Agudath Israel identified this as an issue that was impacting yeshivos and other nonpublic schools and needed to be rectified by the legislature. Then, in March 2016, during its Mission to Albany, Agudath Israel proposed that the reimbursement for immunization be brought current. The organization played a significant role in drafting and developing these bills. Rabbi Shmuel Lefkowitz, Vice President for Community Services, and Agudath Israel Board Member Leon Goldenberg, nurtured the development of this bill in the Senate. Working together with Jim Cultrara of the New York State Catholic Conference, they also asked Assemblyman Walter Mosley to introduce it in the Assembly. That bill is being considered by the Assembly Ways and Means Committee.

Mrs. Deborah Zachai, Agudath Israel’s Director of Education Affairs, said, “We are pleased at this tremendous show of support from Senate Majority Leader John Flanagan, Senator Martin Golden and his fellow legislators. The passage of this bill in the Senate is the first step in an effort to relieve yeshivos and nonpublic schools of a significant financial burden. Hopefully, we’ll see similar support in the Assembly.”