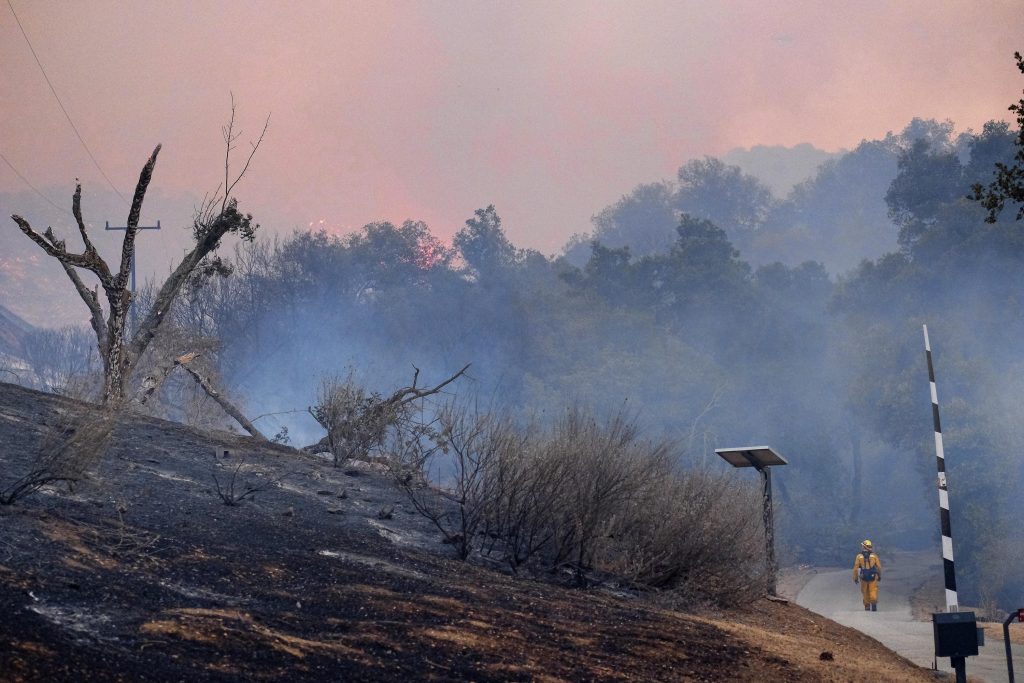 A fast-moving brush fire swept through hills in Southern California on Saturday, threatening 3,000 homes, damaging a few and forcing hundreds of people to flee.

The fire erupted in late afternoon in tinder-dry brush as temperatures soared to nearly 100 degrees in the canyons and ridges northwest of downtown Los Angeles.

A handful of fires erupted in Calabasas and the neighboring West Hills area of Los Angeles but the West Hills blaze was quickly doused while other fires combined and grew to more than 200 acres in a matter of hours, fire officials said.

At its peak, 50-foot-high flames raced along ridgelines and torched trees and brush very close to million-dollar Spanish-style homes below.

Several other buildings, including some at a city park, also were damaged.

Three neighborhoods that crowded on twisty streets below the hillsides were ordered evacuated. They might not be able to return until Sunday afternoon, Mora said.

About 200 homes and some 500 to 600 people were under the mandatory evacuation orders, Mora said, but he urged the others to consider leaving in order to avoid creating a traffic crush later if it becomes necessary to remove them.

“We’re dealing with a fire that’s moving in every direction simultaneously…we can’t get to everybody,” Battalion Chief Dennis Cross told KNBC-TV.

Some horse-owners in the area put the animals in trailers and hauled them away.

Authorities set up an evacuation center for people with large animals at Pierce College in Woodland Hills.

Smoke from the fire could be seen for miles.

Around 200 firefighters, aided by bulldozers and water-dropping helicopters, battled the blaze and as night fell and the weather cooled, they were making significant progress.

“The threat is substantially less,” Mora said. “There’s just some hot spots within this whole area. I do see a lot of white smoke.”

The fire may have started when a car hit a power pole and knocked down a power line, sparking flames in the tinder-dry brush, fire officials said.