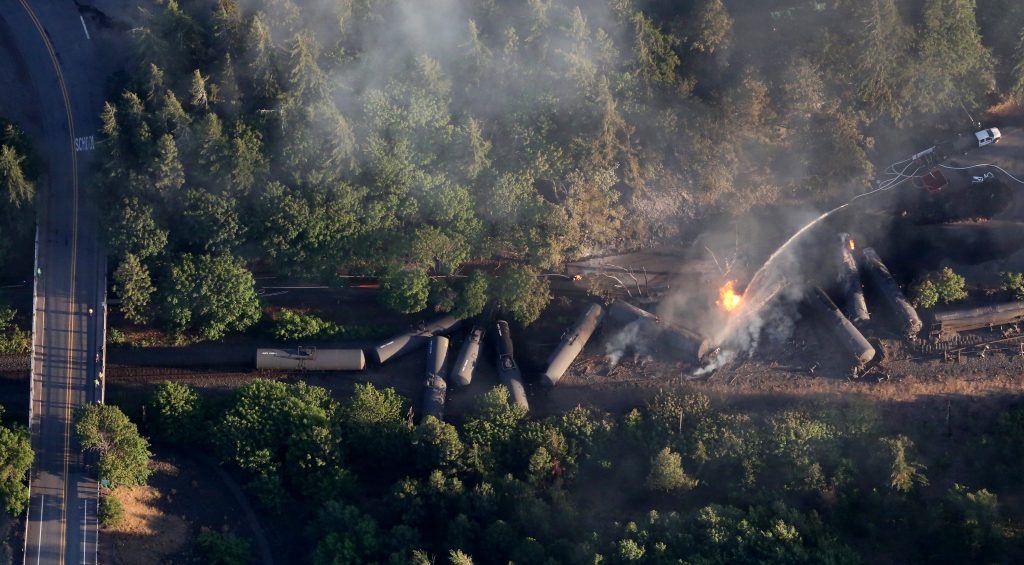 Environmental crews worked Saturday to contain a sheen of oil that appeared in the Columbia River along the Washington-Oregon border after a Union Pacific train derailed and caught fire, but officials said there was no immediate indication of harm to wildlife.

Sixteen of the 96 tank cars on the train derailed Friday near Mosier, Oregon, about 70 miles east of Portland. Four burned, sending a thick plume of black smoke into the sky before firefighters were able to extinguish the flames a little after 2 a.m. Saturday.

There was no immediate word on the cause of the derailment, which forced the evacuation of about 100 people from a nearby mobile home park, as the site remained too hot to examine. Officials said they would consider lifting the evacuation order Saturday evening.

“I want to apologize to the community,” Union Pacific spokeswoman Raquel Espinoza said at a news conference, adding that the company would pick up the tab for the response costs. “This is the type of accident we work to prevent every day.”

The derailment, in the scenic Columbia River Gorge, manifested the fears of environmentalists who have long argued against shipping oil by rail — especially through populated areas or along a river that’s a hub of recreation and commerce. The tank cars were carrying especially volatile crude from the Northern Plains’ Bakken region, which has a higher gas content and vapor pressure than other types of oil.

More than 100 people rallied and marched in nearby Hood River, Oregon, on Saturday to call for a halt to the practice.

At first light Saturday, crews noticed a light sheen in the Columbia at the mouth of Rock Creek. Responders deployed about 1,000 feet of boom to contain it. It wasn’t clear how much oil had spilled from the trains.

By Saturday afternoon, three of the cars had been re-railed. Crews had been waiting for the cars to cool before transferring the oil into tank trucks.

To get to refineries on the East and West coasts and the Gulf of Mexico, oil trains move through more than 400 counties, including major metropolitan areas such as Philadelphia; Seattle; Chicago; Newark, New Jersey; and dozens of other cities, according to railroad disclosures filed with regulators.

Including Friday’s incident, at least 26 oil trains have been involved in major fires or derailments during the past decade in the U.S. and Canada, according to Associated Press analysis of accident records from the two countries.

The worst was a 2013 derailment that killed 47 people in Lac-Megantic, Quebec. Damage from that accident has been estimated at $1.2 billion or higher.

At least 12 of the oil trains that derailed over the past decade were carrying crude from the Northern Plains’ Bakken region. Of those, eight resulted in fires.

Since last spring, North Dakota regulators have required companies to treat oil before it’s shipped by rail to make it less combustible.

Reducing the explosiveness of the crude moved by rail was not supposed to be a cure-all to prevent accidents. Department of Transportation rules imposed last year require companies to use stronger tank cars that are better able to withstand derailments.