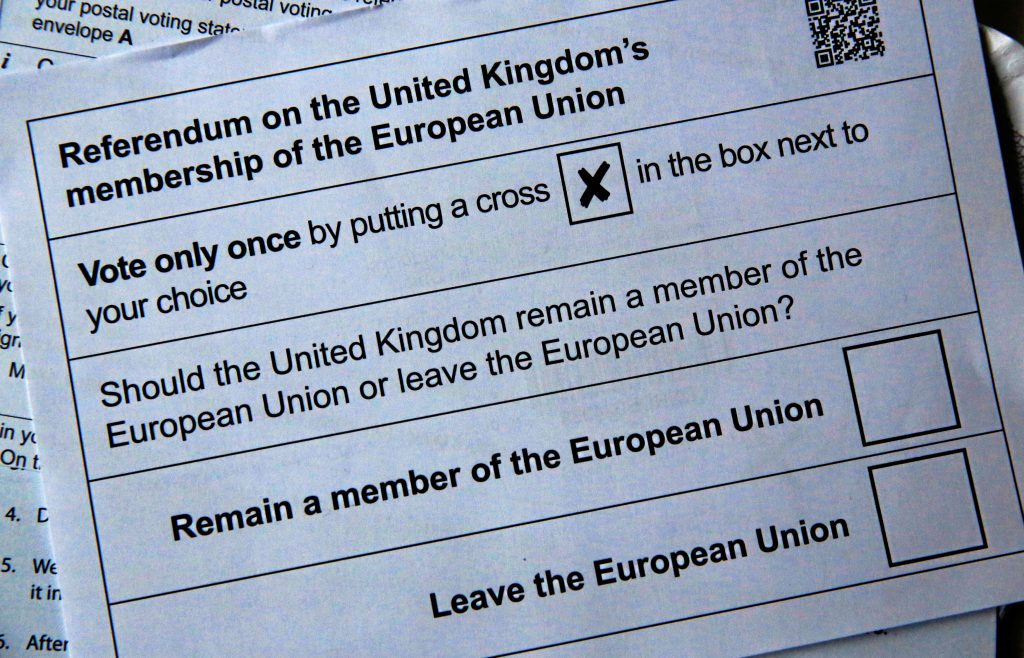 The Federal Reserve may delay an interest rate rise at its June meeting due to concern about the economic fallout of Britain’s impending vote on whether to leave the European Union.

The geopolitical risk related to the vote will likely delay any U.S. rate increase until at least July, despite apparent consensus among Fed officials that a rate hike is warranted by stronger U.S. economic growth and a tight labor market.

The Fed’s June 14-15 policy meeting will come just a week before the British vote on June 23.

A “leave” vote, dubbed as “Brexit,” may roil financial markets, cause credit spreads to widen, trigger a rush into safe assets, and push up the U.S. dollar.

The dollar’s recent stability is one reason the Fed has become more comfortable with raising rates, so officials may want to let the threat of Brexit pass before moving to tighten financial conditions.

Fed Board Governor Daniel Tarullo on Thursday joined a chorus of those expressing concern about the British vote, telling Bloomberg that Brexit would be a “factor” he would consider at the Fed’s June policy meeting.

Recent polls suggest voters in Britain, Europe’s second-biggest economy and its most influential financial center, were evenly split on whether to stay in the EU or leave.

All three Fed Board governors who spoke recently suggested Brexit will weigh against a June rate hike, including Lael Brainard who on Friday said “prudent risk-management” calls for waiting for more data and greater certainty over the British vote before raising rates.

Fed Board Governor Jerome Powell said last week said the vote could be “a factor in favor of caution about raising rates,” a view fellow governor Daniel Tarullo echoed Thursday.

Fed Chair Janet Yellen will air her latest views in a speech in Philadelphia on Monday.

Fed officials will release their latest economic projections at the June meeting, along with a policy statement, followed by a press conference by Yellen.

Meetings across Europe reveal uncertainty over what would follow a vote that British Prime Minister David Cameron calls a “leap in the dark.”

If Britain remains in the EU, it could lead to more infighting in the ruling Conservative party and destabilizing battles with the rest of the EU.

Waiting on the Brexit vote is a “no-brainer,” said Jon Faust, a former Fed staff member and now at Johns Hopkins University. “Why move now as opposed to a few weeks from now?”

The message from regional Fed bank presidents recently has been consistent: The upcoming Brexit vote may tip the scales against a June increase.

And Wall Street appears to be getting the message as well. A poll of primary dealers Friday showed all expect the Fed to wait until after June to raise rates, with Brexit seen as at least a “somewhat significant” factor.

This is only the latest obstacle to the Fed’s two-year struggle to normalize U.S. monetary policy in the wake of the 2008 global financial crisis.

In 2014 the crash in oil prices and a jump in the dollar crushed U.S. exports and drove inflation down.

Last year, a slowdown in China’s economy, alongside malaise in Europe and Japan, sparked global market volatility and concerns about a possible worldwide recession.

The Fed finally raised interest rates for the first time in a decade in December last year. Now the prospect of another rate rise this year appears all but certain, assuming Brexit does not occur.

U.S. inflation appears to be rising as the drag from cheap oil and a strong dollar fades, and a slowdown in first quarter economic growth looks to be temporary, with consumer spending and the housing market showing strength.

A U.S. Labor Department report on Friday though showed job growth braked sharply in May, leading traders to now bet the Fed will defer rate hikes, according to a Reuters poll.

The probability of a June rate increase is now down to 4.0 percent, according to CME Fed funds futures prices, from about 19 percent before Friday’s jobs data.

Traders trimmed expectations for a July rate hike, giving it just a 36 percent chance, down over 50 percent before the jobs report.

While the impact of a vote to leave the EU is uncertain, one widely expected result is likely to be a jump in the U.S. dollar which would be a further blow to U.S. exporters and another drag on inflation.

If the Fed does indeed leave rates unchanged at its June meeting, officials have said they will be ready to move in July.

Minutes of the Fed’s March policy meeting showed officials preparing the ground for higher rates some time in the summer.

After July, the next option would be September, in the middle of a U.S. election campaign in which Fed policy could well be a subject of debate.

Four of the Federal Reserve’s 12 regional bank presidents have asked to raise the interest rate charged to commercial banks for short-term loans, a proxy for saying the fed funds target rate should move higher.

If the board defers a rate hike in June, Yellen will face a challenge in explaining why global factors are again trumping domestic economic data, given Fed officials have tried to convince the public that their decisions are “data dependent.”

One approach she could take, economists said, is to flag Fed officials’ agreement in favor of gradual rate rises over the next couple of years, while emphasizing low inflation means there is no urgency, especially ahead of the Brexit vote.

“Even if Brexit were seen to be an unlikely outcome, we think this extremely cautious Fed Chair might see relatively little cost to waiting another seven weeks to act,” RBS economists Michelle Girard and Kevin Cummins said in a note.