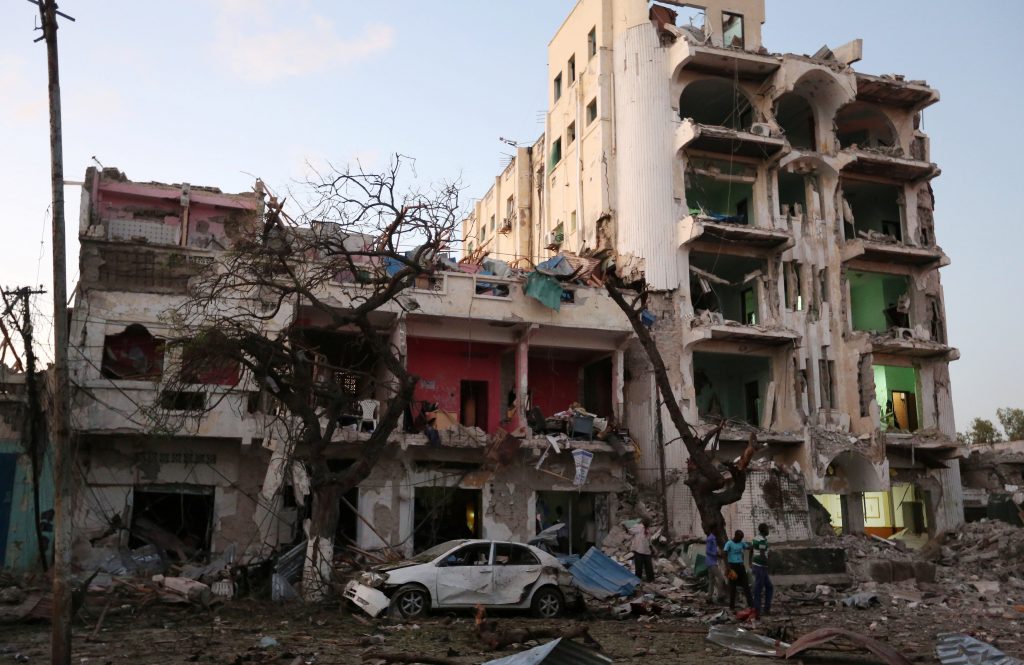 More than a dozen people were killed in attacks by al-Shabaab terrorists at a prestigious hotel in the Somalian capital of Mogadishu on Wednesday, hours after a senior al-Shabaab leader was killed in an overnight raid, after which the terrorists seized the hotel.

At least eight people were killed in a car bomb explosion outside the Ambassador Hotel, which is often frequented by government officials and business executives.

After the blast, several gunmen stormed into the hotel and started shooting indiscriminately, according to Dalnar Hassan, a witness who was also bleeding profusely from the shoulder.

In all, at least 15 were killed and 20 wounded in the attacks, Major Ibrahim Hassan, a police officer, told Reuters. He also said that lawmakers Mohamud Mohamed and Abdullahi Jamac were killed.

Shortly after 10 p.m. local time, Hassan said that the security operation was about to end, as police appeared to be taking back control of the hotel.

But several hours later, sporadic gunfire could still be heard.

“This is the biggest explosion I’ve ever seen in my life,” Mohamed Ali, a policeman, said near the Ambassador Hotel. “It shows al-Shabaab are still a potent threat to the entire population.”

Al-Shabaab claimed responsibility for the attack in a statement read out on Radio Andulus, a broadcaster that supports the group.

The al-Qaida-linked group said it had killed 20 people in addition to the two lawmakers.

“We targeted the members of the apostate government … We killed many of them inside and we shall give details later. Our mujahideen are on the top floor of the hotel building,” Sheikh Abdiasis Abu Musab, al Shabaab’s military operation spokesman, told Reuters.

The terror group has waged an insurgency in Somalia since 2006 in a bid to impose a strict version of Islamic law. An African Union mission helped the nation’s forces push the terrorists from Mogadishu in 2011, and since then took over territory in the group’s strongholds in the south and central regions.

Somalia’s forces killed Mohamed Dulyadeyn, an al-Shabaab leader who neighboring Kenya believes was the mastermind behind an April 2015 university attack in that country. During the raid, 147 people, mostly students, were killed in the eastern town of Garissa near the Somali border. It was the worst attack by Islamist terrorists in Kenya since the 1998 bombing of the U.S. embassy in Nairobi that killed more than 200 people.

Dulyadeyn was killed in an overnight assault on an al-Shabaab stronghold in Bulo Gadud, a village 19 miles from the southern port of Kismayo on Tuesday night, according to Abdirashid Hassan Abdi, a regional security minister.

Separately, U.S. forces targeted Abdullahi Haji Da’ud, one of al-Shabaab’s most senior military planners and a coordinator of attacks in the region including in Kenya and Uganda, in an airstrike on May 27, Pentagon spokesman Peter Cook said in a statement on Wednesday. The results of the airstrike are still being assessed, he said.