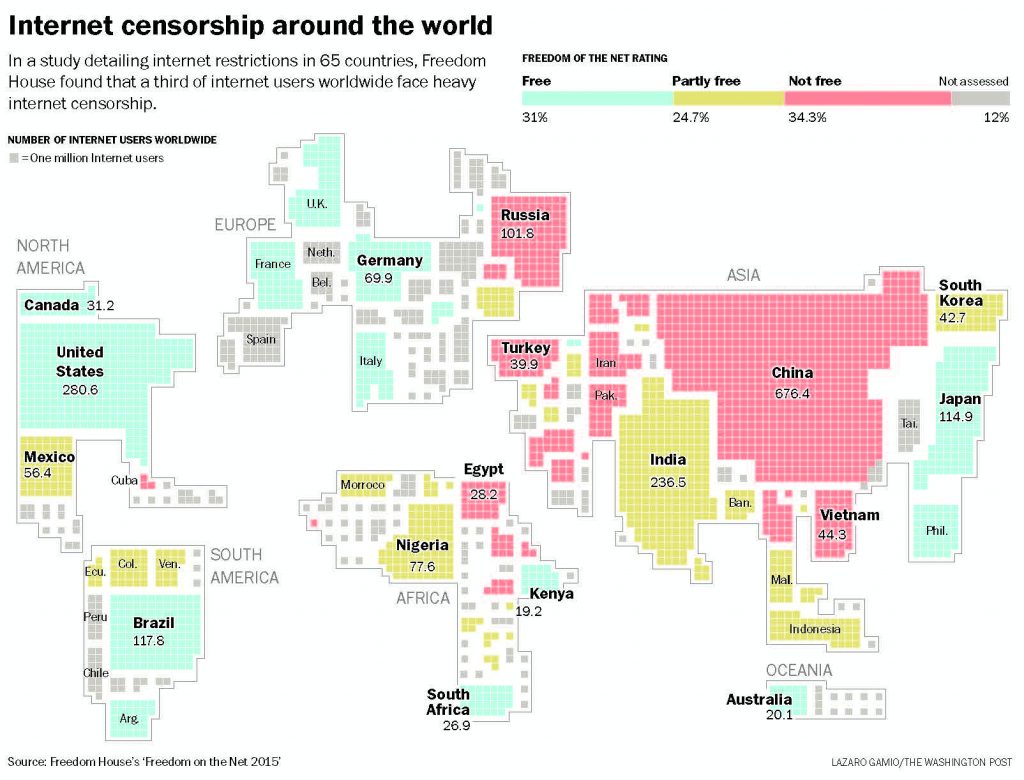 First there was the Berlin Wall. Now there is the Great Firewall of China, not a physical barrier preventing people from leaving, but a virtual one, preventing information harmful to the Communist Party from entering the country.

Just as one fell, so will the other be eventually dismantled, because information, like people, cannot be held back forever.

Or so the argument goes.

But try telling that to Beijing. Far from knocking down the world’s largest system of censorship, China in fact is moving ever more confidently in the opposite direction, strengthening the wall’s legal foundations, closing breaches and reinforcing its control of the web behind the wall.

Defensive no more about its censorship record, China is confidently trumpeting its vision of “internet sovereignty” as a model for the world and is moving to make it a legal reality at home. At the same time – confounding Western skeptics – the internet is nonetheless thriving in China, with nearly 700 million users, putting almost 1 in 4 of the world’s online population behind the Great Firewall.

China is the world’s leader in e-commerce, with digital retail sales volume double that of the United States and accounting for a staggering 40 percent of the global total, according to digital business research company eMarketer. Last year, it also boasted four of the top ten internet companies in the world ranked by market capitalization, according to the data website Statista, including e-commerce giant Alibaba, social media and gaming company Tencent and search specialists Baidu.

“This path is the choice of history, and the choice of the people, and we walk the path ever more firmly and full of confidence,” China’s internet czar, Lu Wei, boasted in January.

After two decades of internet development under the Communist Party’s firm leadership, he said, his country had struck the correct balance between “freedom and order” and between “openness and autonomy.” It is traveling, he said, on a path of “cyber-governance with Chinese characteristics.”

What China calls the “Golden Shield” is a giant mechanism of censorship and surveillance that blocks tens of thousands of websites deemed inimical to the Communist Party’s narrative and control, such as social-media sites.

In April, the U.S. government officially classified it as a barrier to trade, noting that eight of the 25 most-trafficked sites globally were now blocked here. The American Chamber of Commerce in China says that four out of five of its member companies report a negative impact on their business from Internet censorship.

Yet there is to be no turning back. Later this year, China is expected to approve a new law on cybersecurity that would codify, organize and strengthen its control of the Internet.

Apple was an early victim, announcing in April that two if its services were no longer available in China, six months after their launch here (though shortly afterward, it announced a $1 billion investment in a Chinese car service).

As it pursues a broad crackdown on free speech and civil society, China has tightened the screws on virtual private network (VPN) providers that allow people to tunnel under the Firewall.

The changes are not, as some initially feared, a move to cut off access to the outside world and establish a Chinese intranet, but are instead an attempt to extend legal control and supervision over what is posted online within the country, experts say.

Indeed, China’s Firewall is far more sophisticated and multi-tiered than a simple on-off switch: It is an attempt to bridge one of the country’s most fundamental contradictions – to have an economy intricately connected to the outside world but a political culture closed off from such “Western values” as free speech and democracy.

The internet arrived in China in January 1996, and China first started systematically blocking some foreign websites in August 1996. (The nickname the Great Firewall was first coined by Wired magazine in 1997.)

But the system as it stands now really only began to be developed and implemented in the early 2000s. Google was first blocked, for nine days, in September 2002. Other popular sites started being banned several years later, after political riots.

Still, there have always been deliberate loopholes.

Take VPNs, tools that allow users in China to tunnel into the internet via a different country. Virtual private networks enable users to encrypt traffic, circumvent censorship and experience the internet exactly as if they were in the United States, for example, albeit at a cost in terms of browsing speed.

The Chinese government has long known and accepted the fact that a small percentage of its population circumvents the Firewall using VPNs. It is, after all, essential that domestic and foreign businesses can access information across borders, and it keeps the English-speaking elite happy to allow them a small window on the world.

“They are willing to tolerate a certain amount of porousness in the Great Firewall, as long as they feel that ultimately, if they need to exert control, they can,” said Jeremy Goldkorn, director of a media and internet consulting firm called Danwei.

In March, the annual meeting of China’s parliament, the National People’s Congress, was just such a time, when security concerns trumped every other consideration. Internet browsing speeds slowed and some VPN services struggled.

The Communist Party is more concerned with what ordinary people read than what the globally mobile elite might encounter on the web.

Google is still blocked in China, and local search engine Baidu has its results heavily censored. But the difference between Baidu searches in Chinese and in English for the word “Tiananmen,” or the phrase “Tiananmen tank man,” is revealing: The Chinese searches yield no links to the pro-democracy protests in 1989 or the lone man who tried to prevent the tanks’ advance into the square – just to the vast square’s virtues as a tourist attraction.

“According to relevant laws, regulations and policies, some results are not displayed,” Baidu informs its readers if the words “tank man” are entered.

But searches in English are quite different, throwing up several websites, including a BBC photo gallery, a Wikipedia entry and several other Western sources of information.

Similarly, the degree of censorship is not the same throughout China, according to Vasyl Diakonov, chief technology officer at KeepSolid VPN in Odessa, Ukraine.

Some IT hubs in the east of the country have relatively minor restrictions, while remote regions in western China — where ethnic discontent runs highest — have nearly all the well-known VPN protocols blocked, he says. Indeed, just using a VPN to access blocked websites can earn you a trip to the local police station in the troubled, Muslim-majority province of Xinjiang, residents say.

Even as Western firms here complain about Beijing’s restrictions on the internet, the impact on China’s domestic economy is less clear-cut.

“The consequences for China in what we might call the creative economy will be substantial, the consequences in terms of China’s soft power will be substantial, but for the economy as a whole it isn’t necessarily decisive,” said Lester Ross, partner-in-charge of the Beijing office of WilmerHale, a leading global international law firm, and a senior member of the American Chamber of Commerce – People’s Republic of China.

In any case, for China’s current leadership, other policy objectives – national security and keeping the party in power – trump concerns about the deleterious effects of the government’s heavy hand on the internet, Ross says.

Rogier Creemers, a professor of law and governance at Germany’s Leiden University, argues that predictions of the Firewall’s imminent demise are a product of a mistaken post-Cold War consensus that Western freedom and democracy were inevitable, and that the free flow of information over the internet would help usher in a new era.

“The internet,” he said, “is as much as tool for control, surveillance and commercial considerations as it is for empowerment.”

Xu Yangjingjing contributed to this report.