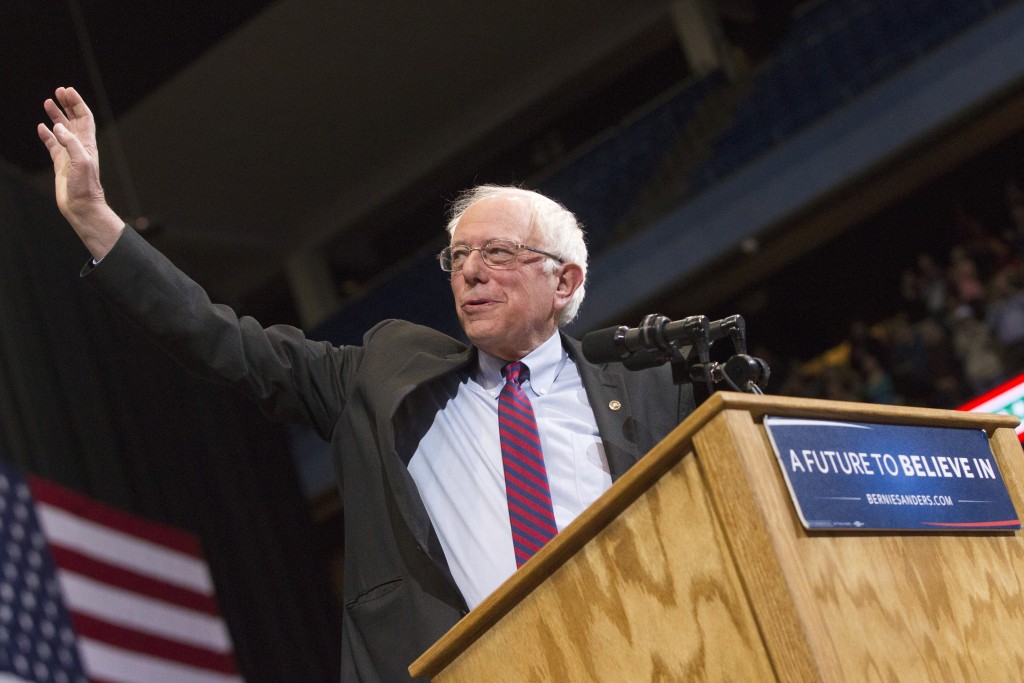 The presumptive Republican presidential nominee is seizing on Sanders’ refrain that the Democratic Party is stacked against him, shutting out his supporters and rigging the rules to favor Hillary Clinton.

In rallies, posts and interviews, Trump has made Sanders’ plight a frequent talking point.

“Bernie Sanders is being treated very badly by the Democrats — the system is rigged against him,” Trump posted Wednesday. “Many of his disenfranchised fans are for me!” This followed Sanders’ victory in the Oregon primary, with a Kentucky contest too close to call.

As Trump tries to make common cause with Sanders backers attacking their own party, Sanders’ path to the nomination has narrowed to the nearly impossible and campaign donations have plummeted. He’s putting forward a long list of grievances with the Democratic Party as the reason for his declining fortunes. And he’s threatening that unless the system is changed, Republicans — like Trump — will win over working-class voters.

“We can have a long conversation about Debbie Wasserman Schultz, just about how she’s been throwing shade on the Sanders campaign from the very beginning,” Sanders campaign manager Jeff Weaver said on CNN.

Schultz aside, Clinton has won over broad majorities of minority and female voters, giving her the lead not only in delegates but in the popular vote. But that reality hasn’t swayed Sanders, whose heavy emphasis on party functionaries and arcane political rules is a notable change for a candidate who’s long focused on curbing income inequality, regulating Wall Street and eradicating the influence of corporate money in politics.

Sanders and Trump have both seen themselves as victims of a system stacked against them by the establishment. It’s a complaint Trump has put behind him now that he’s vanquished his rivals and come within reach of a nomination-clinching delegate majority. But Sanders and his supporters are simmering, if not boiling over, with that grievance now.

“I’ve been receiving phone calls from all over the U.S. … they threatened my life, they’ve threatened my family,” said Nevada Democratic Party chairwoman Roberta Lange. “I feel threatened everywhere I go.”

Those protests, though, are rooted in rules that were set months, if not years, ago — long before Trump and Sanders caught fire with the independents and first-time voters who’ve fueled their rise. Both were tripped up by Byzantine party statutes that govern how nominees are chosen.

When Trump saw Ted Cruz begin to outmaneuver him in the hunt for delegates, Trump started railing against a “rigged” and “crooked” electoral system that he said favored the will of party bosses over millions of Republican voters. And Trump frequently linked his fate with that of Sanders, expressing disbelief that Sanders could win one primary after the next and still be losing to Clinton.

While the Republican system’s rigging was more “sophisticated,” he said, the Democrats’ system was just as bad, because of its use of hundreds of superdelegates — the party insiders who can declare their support for any candidate regardless of who wins primary contests.

In Nevada, chair throwing, shouted profanities and even death threats to party leaders marked a meeting of the state party on Saturday. Sanders supporters accused Lange of stacking the rules against them. But those rules were approved by the state party’s full board weeks ago, party officials said.

Clinton backers say the Sanders supporters simply do not understand the process.

“I cannot see anything that’s within the jurisdiction of the rules committee that has any impact on who’s the nominee,” said former Massachusetts Rep. Barney Frank, a Clinton backer charged by the DNC with heading up the convention rules committee. “He just got mad at me because some of the criticism that I’ve made of his legislative record.”

But Weaver said on MSNBC on Wednesday that “clear structural impediments” block the rise of insurgent candidates like Sanders and prevent new voters from joining the party.

Sanders says he will fight hard to defeat Trump, whether or not he captures his party’s nomination.

Clinton, who is on a firm path to clinching the nomination within weeks, faces the prospect of winning back Sanders supporters, many of whom are feeling increasingly alienated.

That hasn’t gone unnoticed by Trump. His campaign sees winning over angry Sanders supporters and other disenchanted Democrats — particularly in states like Pennsylvania, Michigan and Ohio — as key to victory.

In recent days, Trump has begun to suggest that Sanders should mount a third-party campaign. “He should run as an independent!” posted Trump on Monday. “Run Bernie, run.”

The idea is not rooted in sympathy, though, but in Trump’s conviction that such an independent effort would siphon votes from Clinton in the fall and help make him president.