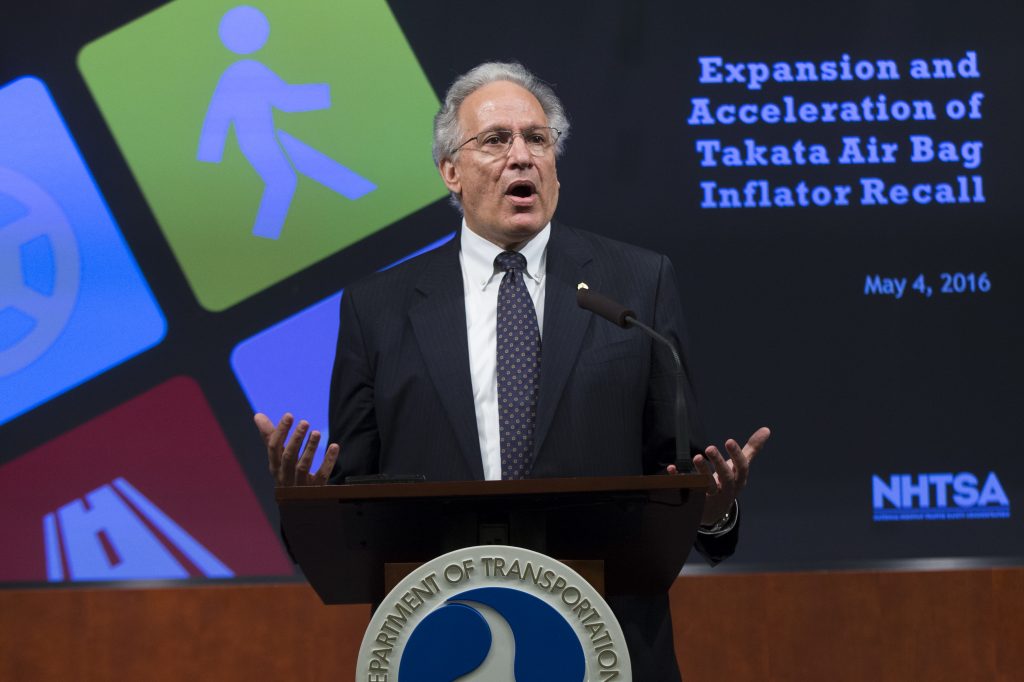 Takata will recall another 35 million to 40 million air-bag inflators, a stunning increase that will more than double what is already the largest automotive recall in American history, the federal government announced Wednesday.

The recall expansion would bring to as many as 69 million the total number of inflators to be replaced, a gargantuan task that the government predicts will take until the end of 2019 to complete.

The car and truck models included in the expanded recall and the number of additional vehicles affected were not immediately released, but will be posted on the website of the National Highway Traffic Safety Administration (NHTSA) in the coming weeks. Most of the expansion is for front passenger air bags that were not part of previous recalls, said Mark Rosekind, NHTSA Administrator.

“This issue is urgent,” Rosekind said, urging people to get recalled vehicles fixed as soon as parts are available.

“The science now clearly shows these inflators can become unsafe over time,” he said, referring to evidence that chemicals in the devices can degrade, especially when exposed to heat and humidity.

Fourteen manufacturers were involved in the recall, and the expansion includes three additional automakers, Tesla, Jaguar-Land Rover and Fisker.

Takata inflators can explode with too much force and injure people. So far, at least 11 deaths and more than 100 injuries have been reported worldwide.

Replacing so many inflators will be a daunting task because automakers in the current recall of 28.8 million inflators have only been able to fix 28 percent of the cars involved after more than two years. Air-bag manufacturers have had trouble making enough replacement inflators, and automakers have had difficulty finding owners and persuading them to get cars repaired.

The expansion will be phased in between now and December 2019, with older cars and those in areas of high heat and humidity getting priority, the agency said.

Takata uses the chemical ammonium nitrate to create an explosion that inflates air bags in a crash. But if the chemical degrades, it can burn too fast, blowing apart a metal canister and spewing shrapnel.

The government and an independent expert it hired reviewed three independent investigations and confirmed findings that the problem is caused by time, airborne moisture and temperature fluctuations that can degrade the ammonium nitrate, the agency said.

“This recall schedule ensures the inflators will be recalled and replaced before they become dangerous,” Rosekind said.

NHTSA officials said vehicles younger than six years old are not currently at risk even if they are in a high humidity region. But as they age, the risk grows, especially in humid areas where temperatures frequently cycle from cool to hot.

Six years is a conservative estimate, and the replacement schedule is aimed at getting vehicles fixed before they are old enough to risk a rupture, the officials said.