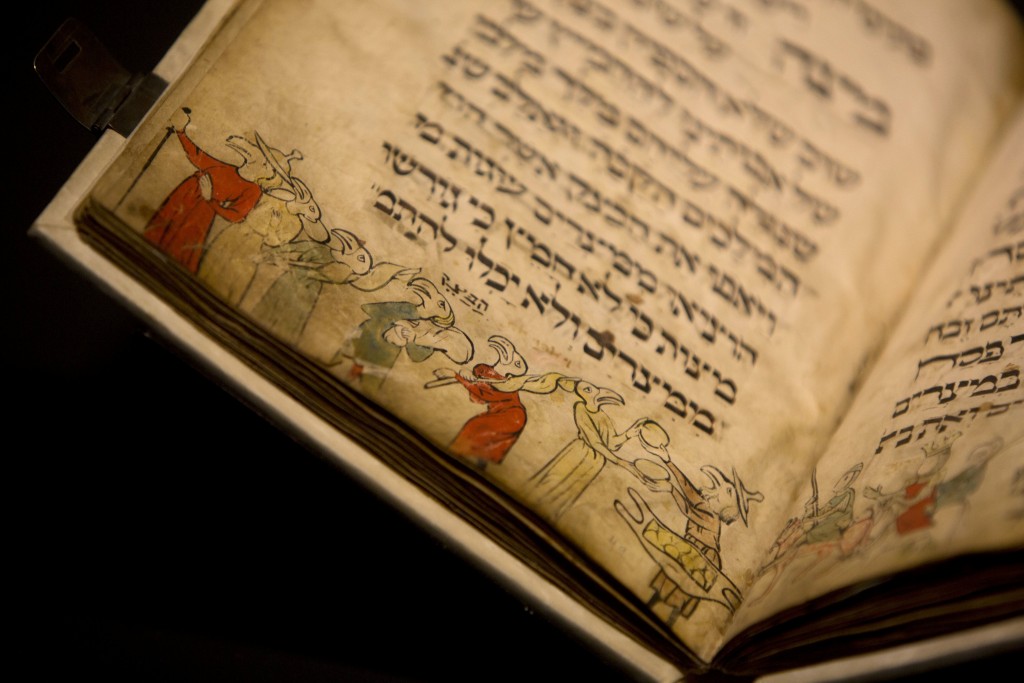 The grandchildren of one of the earliest Jewish victims of the Nazis are laying claim to a jewel of Israel’s top museum: the world’s oldest illustrated Haggadah.

The descendants of a German Jewish lawmaker say the famed Birds’ Head Haggadah was stolen from their family during the Nazi era and sold without the family’s consent 70 years ago to the predecessor of the Israel Museum in Yerushalayim— an act the family calls a “long-standing illegal and moral injustice.”

The manuscript is currently displayed behind glass in a darkened room at the Israel Museum in a special exhibit before Pesach, which begins Friday. The family wants the manuscript to remain at the museum, but it demands the museum pay compensation and rename the manuscript after the family, or face a lawsuit.

“We want a compromise,” said Eli Barzilai, 75, who lives in Yerushalayim.

He is leading the restitution demand on behalf of his cousins in the United States and Berlin. He said the manuscript is so rare that it is priceless.

The Art newspaper, which first reported the ownership claim, said the family is seeking “less than” $10 million, but neither Barzilai nor the family’s lawyer would cite a figure to The Associated Press.

Barzilai said his lawyer and the Israel Museum had exchanged documentation regarding the Haggadah, and that Barzilai would meet museum staff for the first time in May.

The museum said in a statement that it “looks forward to meeting with Mr. Barzilai, following its several suggestions that he do so, and to learning about whatever new information and documentation he has and to sharing what the Museum knows with him.”

In an email exchange provided by Barzilai’s lawyer, the museum’s lawyer acknowledged the Marum family’s ownership of the Haggadah “for a period of time up until 1933.”

Written in southern Germany around 1300 by a scribe identified only as Menahem, the Bird’s Head Haggadah has long been a riddle, mostly due to its strange illustrations of Jewish figures.

Barzilai says the 14th-century Haggadah was a wedding gift from his grandmother’s family to his grandfather, Ludwig Marum, a lawyer from the German town of Karlsruhe who served in Germany’s parliament and opposed Hitler.

The Nazis paraded Marum and other opponents across town before taking them away. Marum was later killed at the Kislau concentration camp.

A Jewish lawyer named Shimon Jeselsohn who worked with Marum managed to flee and eventually moved to Israel after World War II. One day, he read in the newspaper about a special Haggadah purchased by the Bezalel National Museum, the forerunner to the Israel Museum.

Jeselsohn recognized it as the Birds’ Head Haggadah. Marum had kept it in his law office, Jeselsohn said in his memoirs.

Curious as to how the manuscript ended up in Yerushalayim, Jeselsohn began making inquiries. The museum director told him a Jewish immigrant from Karlsruhe brought it after the war. When Jeselsohn asked the immigrant where he got it, he said a Jewish doctor had given it to him. But when the doctor denied it, the immigrant offered no further explanation, and Jeselsohn grew suspicious.

He wrote to Barzilai’s aunt, Elisabeth, who had survived World War II and moved to New York, to update her about the Haggadah’s journey.

After a visit to Israel in 1984 to see the Haggadah at the Israel Museum with Barzilai, Elisabeth wrote to the museum that she believed the immigrant who had brought it to Yerushalayim “had no right to sell it,” but that the Marum family wanted it to remain at the museum “for the benefit of the public.”

For years, the family did not act. Dominique Avery, Elisabeth’s daughter, says her late mother thought she had no recourse to retrieve the manuscript and she deferred to Barzilai.

After Barzilai heard a speech last year at the Israel Museum by E. Randol Schoenberg, the lawyer who retrieved the Klimt paintings, Barzilai enlisted the lawyer’s help.

The museum said it has in recent years restituted 18 works looted during World War II, and is in the process of restituting three more works. There are two researchers dedicated to combing through the museum’s collection for looted objects, the museum said.