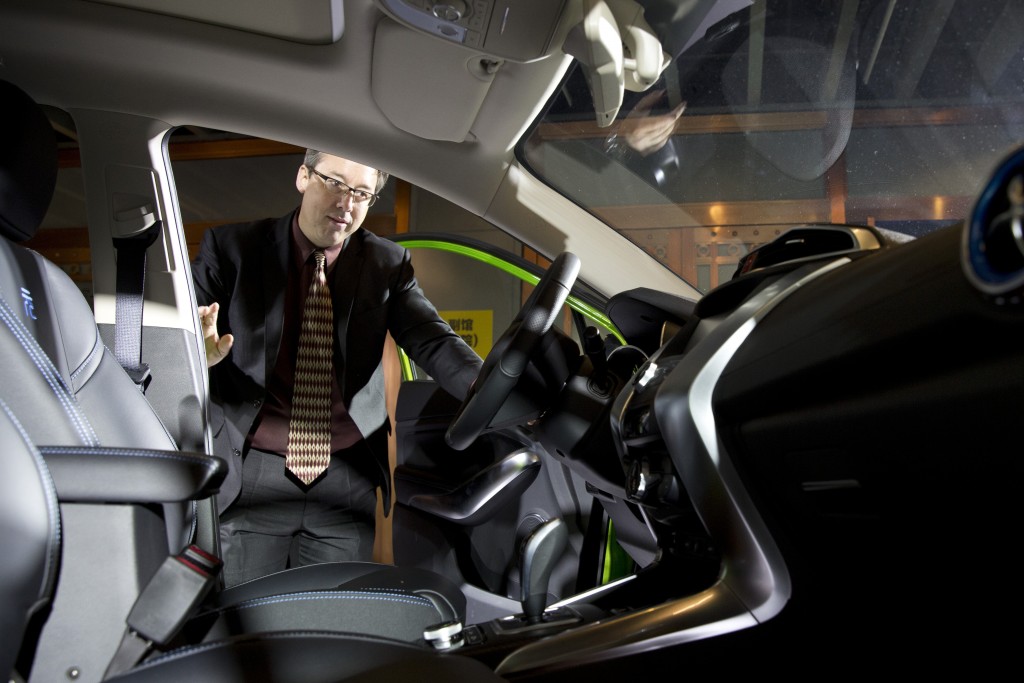 The Chinese automaker that sold more electric cars last year than Tesla, Nissan or GM is taking a back road into the American market on a battery-powered bus.

Detouring around the cost and risk of consumer sales, BYD Co. has quietly built a U.S. business supplying rechargeable buses to environmentally-minded transit agencies. Its factory north of Los Angeles, opened in 2013, is on track to deliver 300 buses this year.

The company has dipped its toe into the U.S. auto market by launching test fleets of plug-in electric taxis in Chicago and New York City.

Consumer sales are coming but BYD has yet to decide when, said Michael Austin, its vice president for the United States. He said it might start developing a sales network within the next two years.

“We have the manufacturing scale that can drive the cost to a point where we can bring vehicles to export markets including the United States, Latin America and Europe that will be game-changing,” said Austin at BYD’s headquarters in Shenzhen, a southern city adjacent to Hong Kong.

Once that comes, “we get brand recognition because people are already riding our buses,” said Austin.

BYD — the name stands for “Build Your Dreams” — is part of an emerging wave of Chinese companies that stand to profit from global demand for solar and wind power, electric cars and other clean and renewable energy.

They benefit from rising consumer interest abroad and heavy spending at home by the ruling Communist Party. Chinese leaders see what they call “new energy” as a field where China still can win a profitable leading role.

“I have no doubt BYD can eventually crack the market in Europe or the U.S.,” said Cosmin Laslau, a senior analyst who follows the electric vehicle market for Lux Research in Boston.

It might take five to ten years to achieve an “equal footing” with GM, Nissan or Tesla, “but it’s surely doable if they look sufficiently ahead,” Laslau said.

“By deploying these buses first (in the United States), BYD can get an early lesson in how its batteries fare,” he said. “And if they are successful, they can point to that and say the battery you are going to get in your electric vehicle has already done a half-million miles in buses.”

In 2014, China spent $83.3 billion in renewables, nearly one-third of the global total. That includes construction of hydro dams and wind farms, research grants to manufacturers, and subsidies to customers.

China surpassed the United States last year as the biggest market for electrics by number of units sold, boosted by government subsidies of up to 60,000 yuan ($9,500) per vehicle.

Unlike startups that are burning cash, BYD is profitable. The company, in which Warren Buffett’s Berkshire Hathaway Corp. owns a 10 percent stake, has yet to release 2015 results but said in January profit rose about 500 percent from a year earlier.

The company started out as a battery developer, founded in 1995 by engineer Wang Chuanfu and 20 co-workers from a state-owned company. It grew to supply about half the global market for mobile phone batteries before expanding into electric vehicles with the 2002 purchase of a small producer of gasoline cars that became BYD Auto Ltd.

BYD’s workforce of 180,000 includes 15,000 engineers in battery development. At its Shenzhen headquarters, a spiral parking structure has 400 spaces to charge taxis and employee cars. The company has its own test track for buses, modeled on the U.S. Department of Transportation’s bus testing site in Altoona, Pennsylvania.

The first two buses out of the BYD factory in Lancaster, California, went to the nearby Antelope Valley Transit Authority, which plans to become the first all-electric U.S. fleet.

The agency is buying 85 BYD buses for a total of $72 million. They include fourteen 60-foot-long (18 meters) articulated buses that can carry 120 people with a range of up to 200 miles (320 kilometers) on one charge, thirty commuter coaches, and 41 forty-foot-long (12-meter) standard buses.

“It’s slightly more expensive,” said Engel. But with annual savings of up to $50,000 on maintenance, “that is paid back in three years, and after that we are making money.”

Other buyers include transit agencies in Los Angeles, Long Beach and Gardena in California, Denver, and St. Albert in western Canada.

Outside North America, BYD buses are in use at Amsterdam’s Schiphol Airport, Japan, Hong Kong, Finland, Denmark and Uruguay.

BYD’s consumer models are, like GM’s Volt, “dual mode” with plug-in charging and a small gasoline engine to generate extra power if needed to help extend the range.

BYD’s workhorse is the e6, a boxy, midsize all-electric hatchback used by taxi companies in China and Europe. The company has a test fleet of 20 in Chicago and is preparing 50 in New York City.

The brand is also moving upmarket. A family of SUVs ranging from subcompact to luxury, named for Chinese dynasties including the Song, Yuan and Tang, have leather interiors and rear-view video.

To reach American consumers, BYD will need to “bring something new to the table,” said Laslau. He said a newcomer in the market might target budget-minded buyers with a model priced under $35,000 with a range of at least 200 miles (320 kilometers) on a charge.

Austin said BYD can meet that today but thinks the price has to be even lower — below $30,000.

“We’re not a toy for the rich,” he said. “We’re going after the mass market. And if you are delivering that, you have to be cost-competitive.”

BYD’s batteries are heavier than its competitors’, but the company says their iron phosphate chemical mix is safer than those made of lithium and cobalt that can sometimes catch fire if punctured.

In its home city of Shenzhen, the local government has purchased 200 electric buses and thousands of taxis. The state-owned utility installs its own charging stations — something BYD cannot count on in other markets.

In the United States, BYD faces a “very large undertaking” of setting up a sales and service network before consumer sales can begin, said Austin, a “battery guy” who joined BYD in 2007 from Motorola Inc., where he had helped manage purchases of the Chinese company’s batteries for mobile phones.

“Our success in 2015 has probably accelerated some of our plans to bring consumer electric vehicles to export markets,” he said. “We have a big job preparing ourselves for that.”