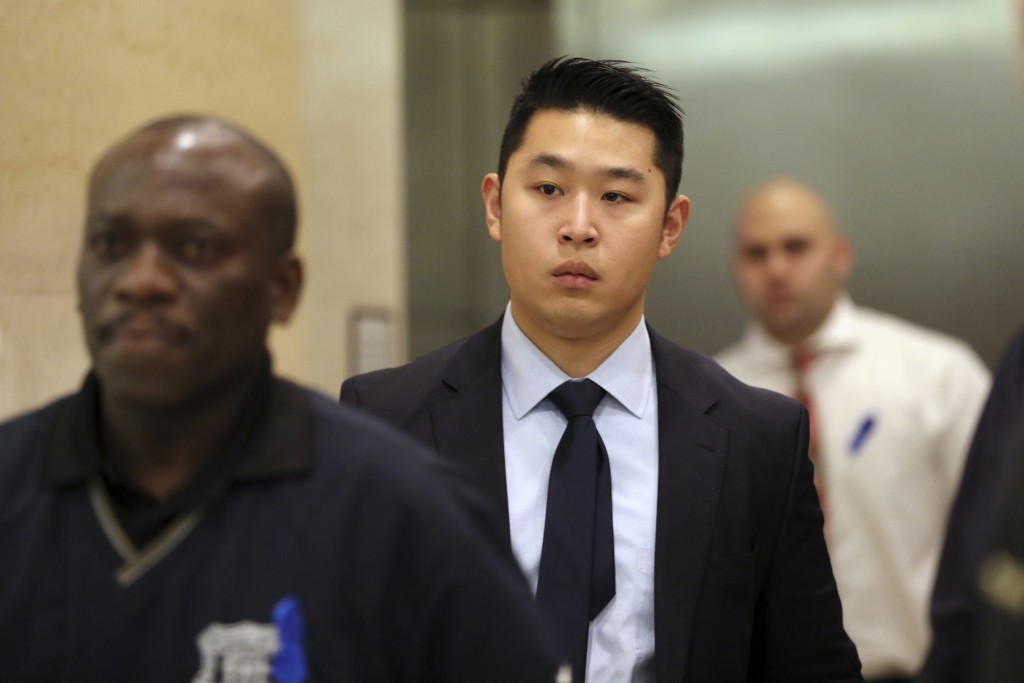 On a Saturday in February, Chivy Ngo, who owns Mister Bo Ky restaurant in Brooklyn, took a rare three-hour lunch break, closed his restaurant, and taped a sign to the door.

“Will be at the rally for PETER LIANG reopen at 3 p.m.”

Ngo, a Chinese immigrant from Vietnam, rarely participates in politics. But that was before New York police Officer Peter Liang fired his gun into a dark stairwell, and the ricocheting bullet struck and killed an unarmed black man.

Liang, who grew up in New York’s Chinatown and is the son of Chinese immigrants, became the first New York City officer in more than a decade to be convicted in a shooting in the line of duty. For Ngo, the case stirred a sense of injustice he had never felt before. He and more than 10,000 other Asian-Americans flooded the streets of Brooklyn.

Nail-salon workers stood with politicians. Cooks marched with uptown lawyers. They waved American flags and hoisted signs suggesting that Liang’s conviction was the product of discrimination: “Peter Scapegoat”; “One tragedy: two victims.” The case sparked similar protests across the nation, but there were also counterprotests by African American groups demanding that Liang go to prison.

In Brooklyn, where the two communities have lived in close proximity for years, the case has opened an emotional conversation about whether Chinese Americans experience racism the same way other minorities do.

Liang’s Chinese supporters say they are taking up the fight against long-unrecognized discrimination against Asian-Americans.

The case against Liang stemmed from an incident in November 2014 when he was patrolling the stairwell of the Louis H. Pink public housing project in east Brooklyn. The stairwell was dark, and in accordance with department practice, he had his gun drawn. It fired — how and why has always been in dispute, though Liang has said he was startled by a noise.

The bullet bounced off a wall and tore through the chest of 28-year-old Akai Gurley a floor below, piercing his heart. Liang didn’t call for an ambulance and didn’t perform CPR — factors that counted against him in court. A jury found him guilty of manslaughter and official misconduct, and he is scheduled to be sentenced this week.

Gurley’s supporters say that whatever unfairness there may be in Liang’s conviction, it can’t compare with the injustice of Gurley’s death.

In New York’s Chinese communities, Liang’s case has become a proxy for years of perceived mistreatment of Chinese Americans, said Peter Kwong, a professor of Asian-American studies at Hunter College.

“It’s an atmosphere of persecution that forms after an accumulation of years of marginalization,” Kwong said.

Karlin Chan, a community board member and organizer, remembers when police and city officials regularly cracked down on struggling Chinese businesses, and when black crimes against Chinese businesses would go unreported. It’s a history of persecution, he said, that’s rendered invisible by the belief that Asian-Americans are uniformly high achieving and affluent — model minorities.

More than 22 percent of Chinese New Yorkers live in poverty. Rising rents in Manhattan Chinatown have pushed many to outlying Chinatowns in Brooklyn and Queens, and to newer communities in Harlem, Elmhurst and Bensonhurst, where Liang lives. The city now has nine Chinatowns and more than 570,000 Chinese people, according to the 2014 American Community Survey.

Yet some of the loudest voices calling for holding Liang criminally liable are also Asian-American. The Committee Against Anti-Asian Violence, based in Manhattan Chinatown, held a vigil to show support for Gurley. For some, distrust of police trumps ethnic solidarity.

Liang, who declined to comment for this story, grew up on Manhattan’s Lower East Side, dreaming of becoming a police officer. His mother was a garment factory worker and later became a travel agent. His father worked as a cook.

He attended elementary school and middle school in Chinatown, and then went on to the Legacy School for Integrated Studies, where the student body was largely black. Liang was widely respected and liked, but he kept to a small circle of friends, said Timothy Wei, who also attended the school.

“We kind of stuck together since we were from the same background in Chinatown,” Wei said.

Another classmate, Stanley Morrison, said he may have been Liang’s closest black friend at the school. “He was seen as a good kid — people recognized that, so nobody messed with him,” Morrison said.

After college, Liang applied to the New York Police Academy. On the day of the shooting, he had been a cop for almost 18 months.

Before Liang’s bullet ended his life, Gurley was planning to move to Florida to be closer to his mother, said his aunt, Peterson.

Many Liang supporters have fixated on Gurley’s record of drug-related arrests, to suggest that he wasn’t an innocent victim. But that history had nothing to do with his death, Peterson said. On the night he was shot, he was visiting a friend.

Supporters on both sides can agree that Liang must be held accountable. Some black activists, when asked, will wonder why the first NYPD officer to face charges for a line-of-duty shooting in more than a decade was Chinese. Chinese supporters of Liang, if prompted, agree that police should face greater scrutiny, and acknowledge a shared struggle for equal treatment. But the question of whether Liang should serve jail time is a fundamental disagreement.