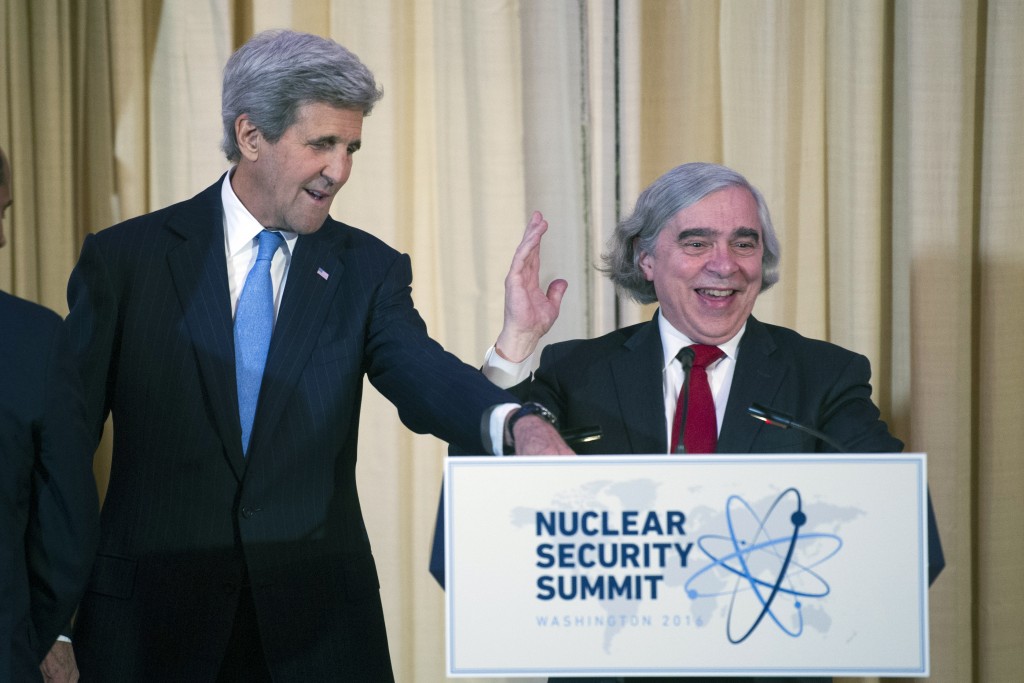 Dozens of world leaders assembling Friday for a nuclear security summit will confront a disparate array of modern-day threats, ranging from government actors like North Korea to murkier groups like the Islamic State.

After six years of prodding by Obama and others before him, the global stockpile of fissile material that could be used in nuclear bombs remains in the thousands of metric tons. What’s more, security officials warn that the radioactive ingredients for a “dirty bomb” are alarmingly insecure in many parts of the globe.

“We have not only great urgency around the nuclear issue, but eliminating generally the scourge of terrorism,” Obama said during a meeting Thursday with French President François Hollande, as he reflected on recent attacks in Brussels and Paris.

Obama planned to review what’s been accomplished and what gaps remain during a news conference at the summit’s conclusion Friday evening. Though Obama has held four such summits since taking office, there are no clear indications they will continue after his presidency ends early next year.

Ahead of the summit, fewer than half of the countries participating had agreed to secure their sources of radiological material, readily available in hospital, industrial and academic settings. Concerns about substances like cesium or cobalt getting in the wrong hands have escalated sharply following deadly attacks by the  IS, raising the disturbing prospect of a nuclear attack on a Western city.

In a twist on previous years, organizers scheduled a special session Friday to hone in on the threat posed to major urban areas by terror groups that the U.S. has said are on the hunt for nuclear materials. The White House said Obama and the other leaders would discuss a hypothetical scenario about a chain of events that could lead to nuclear terrorism.

Yet Obama planned to start off on an optimistic note, reviewing progress toward implementing the Iran deal along with other U.N. Security Council members that negotiated the agreement with the U.S. The White House hoped that session would illustrate constructive ways to stop nuclear weapons from spreading to countries that shouldn’t be trusted to possess them.

Critics of the deal have blasted Obama for rewarding Iran by lifting sanctions and considering easing a ban on U.S. dollars being used in transactions with Iran. Despite Iran’s worrisome ballistic missile work, the U.S. has said that Tehran is meeting all its commitments to scale back its nuclear program under the deal.

As the summit opened Thursday, leaders trained their focus on North Korea, whose continued provocations have stoked concerns throughout the region. Obama discussed steps to deter further North Korean missile tests during a meeting with Chinese President Xi Jinping. In another session with the leaders of Japan and South Korea, he called for vigorous implementation of stepped-up U.N. sanctions.

President Vladimir Putin of Russia, whose massive nuclear weapons stockpile is rivaled only by the U.S., refused to attend this year’s summit. Moscow scoffed at what it deemed U.S. efforts to control the process and take power away from international agencies. Prime Minister Nawaz Sharif of Pakistan, another nuclear-armed country, canceled his trip following a bombing that killed 72.

Decades after the Cold War, the threat of a nuclear war between superpowers has faded, replaced in part by concerns about IS and al-Qaida offshoots operating in North Africa and in Yemen and Saudi Arabia. Last year, an Associated Press investigation revealed multiple attempts by smugglers to sell radioactive material to Middle East terrorists.

After last year’s Paris terror attacks, authorities searching the apartment of two brothers linked to the attacks found a video of a senior official at a Belgian nuclear waste facility. The brothers were part of the Islamic State cell that went on to strike Brussels on March 22. Both died in the attacks.