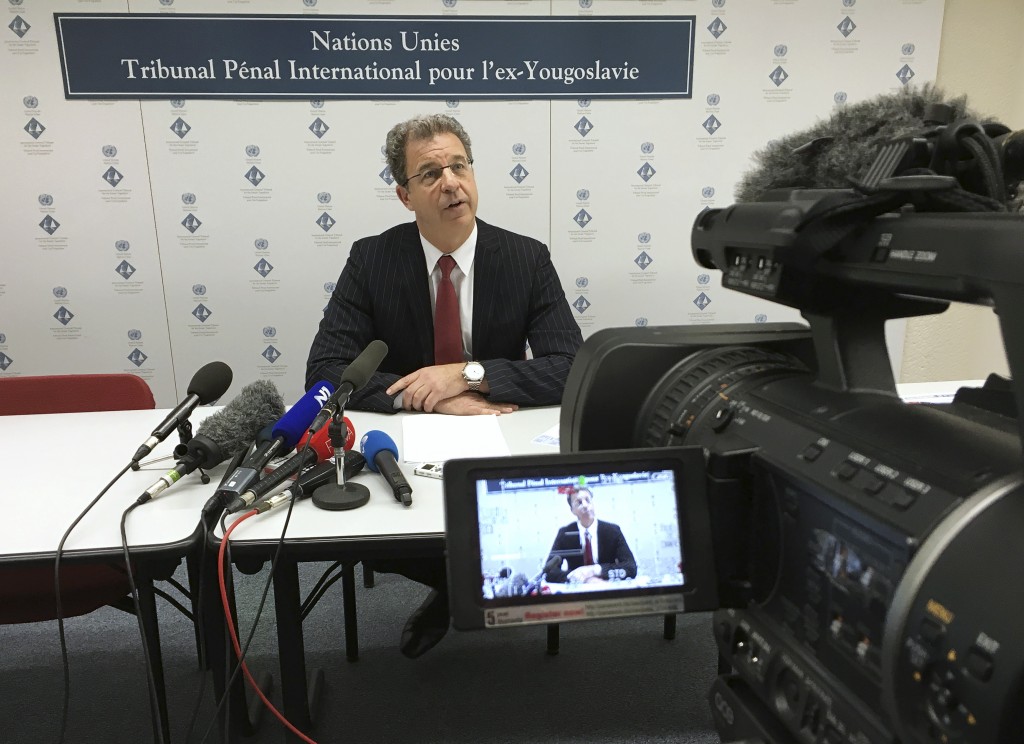 In a sweeping defeat for U.N. prosecutors, the Yugoslav war crimes tribunal acquitted Serbian ultranationalist Vojislav Seselj on Thursday of all nine counts, which alleged that he was responsible for or incited atrocities by Serbian paramilitaries in the 1990s Balkan wars. The ruling sparked joy in Serbia and outrage in Bosnia and Croatia.

Prosecutors had charged Seselj, 61, with crimes including persecution, murder and torture and had demanded a 28-year sentence. But in a majority decision, the three-judge panel said there was insufficient evidence linking the politician himself to the crimes.

“Following this verdict, Vojislav Seselj is now a free man,” Presiding Judge Jean-Claude Antonetti said at a hearing in The Hague, which Seselj did not attend.

At a Belgrade news conference shortly after his acquittal, Seselj, who defended himself throughout his trial and did not call a single defense witness, said the decision was “the only possible one from the legal aspect.”

“After so many proceedings in which innocent Serbs were given draconian punishments, this time two honest judges showed they valued honor more than political pressure,” he said.

The court’s chief prosecutor, Serge Brammertz, questioned a number of key findings by two of the three trial judges. He almost certainly will appeal, but said Thursday he first has to study the 100-page ruling and its dissenting opinions.

In a majority ruling, the three-judge panel ruled that Serbian plans to carve out a “Greater Serbia” by uniting lands they considered Serb territory in Croatia and Bosnia was a “political goal” and not a criminal plan, as prosecutors alleged. The plan often was accompanied by military campaigns that drove out thousands of non-Serb civilians and left thousands of others dead.

Antonetti, the judge, distanced Seselj from the crimes of the paramilitaries he helped to establish, saying that although Seselj, “may have had a certain amount of moral authority over his party’s volunteers, they were not his subordinates” when they went into combat.

Brammertz, the prosecutor, pointed to the ruling’s controversial findings, including that there was not a widespread attack by Serb forces on civilians in Bosnia and Croatia, and that operations to bus non-Serbs out of areas claimed by Serbs as part of a “Greater Serbia” amounted to a humanitarian mission rather than the forcible removal of the population.

“The reading of the conflict by the trial chamber is very, very different to what we are used to,” he told reporters at the court, adding that the marathon case was beset by allegations of interference with witnesses and evidence.

The acquittal stunned many Bosnians.

“An absolutely shocking decision,” said lawyer and publicist Senad Pecanin. “This is the lowest point of The Hague tribunal.”

The ruling also triggered outrage in Croatia, with media headlines declaring “Shame on The Hague, the notorious warmonger is free” by the Jutarnji List newspaper.

Russian state media covered the Seselj verdict extensively, spinning it as a triumph of justice.

Dmitry Rogozin, a Russian nationalist politician turned deputy prime minister, welcomed Seselj’s acquittal. Rogozin met Seselj during his trip to Belgrade in January. He said at the time that it was a private visit and that he had known Seselj since the 1990s.

“I congratulate my friend on his victory!” Rogozin posted on social media. “But who is going to restore his health that was battered by the time in prison and public humiliation?”

Seselj’s return to Belgrade in late 2014, when the tribunal released him on humanitarian grounds due to his ill health, only boosted his popularity among the ultranationalists.

With a surge in pro-Russian and right-wing sentiments ahead of Serbia’s April 24 general election, Seselj’s Serbian Radical Party has a good chance to return to parliament after missing out after the last vote two years ago.

Seselj has campaigned on the platform that Serbia must never enter the 28-nation European Union or NATO and should forge closer ties with Moscow. He has burned EU flags during pre-election rallies, and said he would join a coalition government with the incumbent populists, his former allies, only if they give up their goal of EU accession.

The acquittal has given Seselj an additional boost ahead of the vote. He also said he filed a lawsuit in 2012 against the U.N. court demanding 12 million euros in compensation and could now add 2 million euros more to his demand.

He said he expects to win 20-25 percent of the vote for his far-right radicals.

“The most important is that we get more than the progressives,” he said, referring to the ruling Serbian Progressive Party, his former allies-turned-foes.

Natasa Kandic, a human rights activist in Serbia, said the acquittal would likely be overturned on appeal.

“Some of the explanations are contrary to sane logic,” she said.