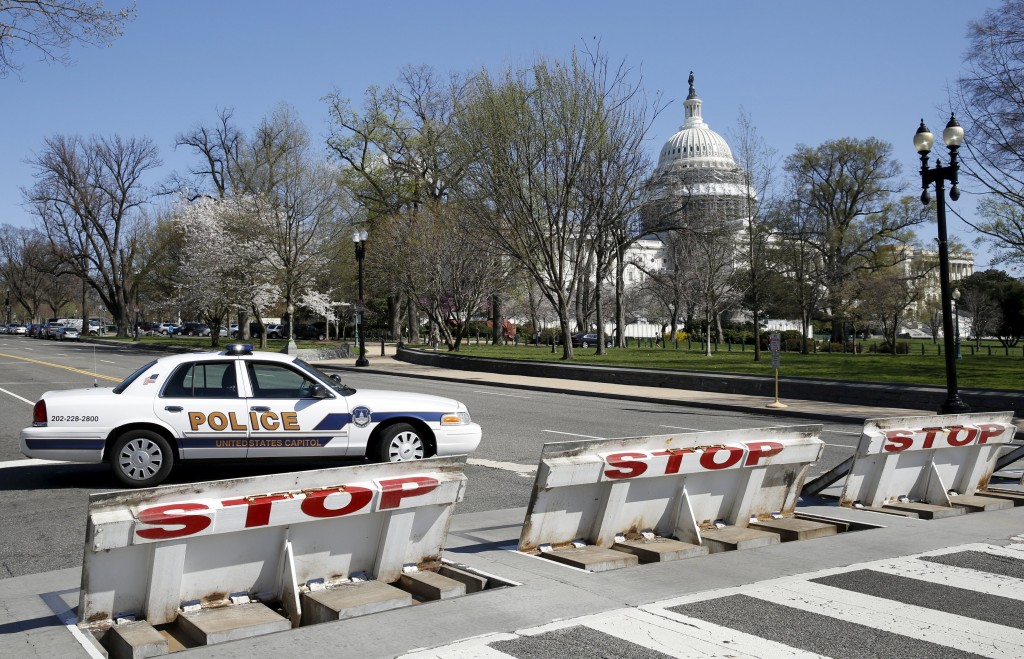 A man with a gun was shot by police Monday afternoon at the Capitol Visitors’Center at the U.S. Capitol Complex, according to two District of Columbia police officials. He was taken to MedStar Washington Hospital Center.

The report of gunfire in a city on heightened alert because of terrorist attacks in Europe sent dozens of emergency vehicles to the Capitol building and forced staff and visitors into lockdown. Road barricades went up, and police officers with automatic rifles were stationed on street corners.

The shooting occurred about 2:40 p.m. at the entrance to the visitors’ center, an underground complex east of the Capitol building. All visitors are screened through metal detectors as they enter the facility.

U.S. Capitol Police Chief Matthew Verderosa said the gunman was caught as he went through the screening process. The man “drew what appeared to be a weapon and pointed it at officers,” the chief said.

He said at least one officer opened fire and struck the gunman. He said police recovered a weapon at the scene and that the man was undergoing surgery at the hospital. His condition was not immediately known. He said the man’s car was found on the Capitol grounds.

Verderosa said the man is known to Capitol police from prior contacts, but he declined to elaborate. He said police “believe this is an act of a single person who has frequented the Capitol grounds before. There is no reason to believe this is anything more than a criminal act.”

Two law enforcement officials said while they have not conclusively verified the suspect’s identity, they believe the man is Larry Russell Dawson, a 66-year-old from Tennessee who police described as a frequent visitor and protester to Washington.

Police arrested Dawson in October after they said he interrupted a House session of Congress, shouting he was a “prophet of G-d.” A judge ordered him to stay away from the Capitol grounds, and in November he missed a court hearing, writing in a letter to the court, “I have been called chosen and sent unto you this day. I am not under the law!…Therefore I will not comply with the court order, nor will I surrender myself to your office.”

During the Monday incident, a female bystander between 35 and 45 years old suffered what appeared to be a minor injury and was taken to a hospital, Verderosa said without describing how her injury occurred.

No officer was injured, and it has not been determined how many officers fired weapons, Verderosa said.

The Capitol will be open on Tuesday, the chief said.

Trevor Kussman, a textile executive visiting with his wife and children from Chicago, said his family was inside the visitors’ center watching an educational movie when an announcement was made about “shots being fired.” The film continued to play, but some people got up to leave.

Other families inside the theater said it was strangely calm as they heard the intercom blare a prerecorded announcement about an “active shooter.”

Outside the Capitol, Diane Bilo from Ohio was waiting for her husband and two of their children to emerge. She said they had been in the cafeteria.

“My husband said he heard a shot followed by a full clip,” Bilo said.

Amy and Kai Gudmestad of Minneapolis were at the visitors’ center with their two children for a tour when officers suddenly started yelling at them to get down.

“There was just yelling, and they told us to get down, and then the officers got us into the theater,” Amy Gudmestad said. The family said they did not hear gunshots.

“It happened very fast,” said Eli, her 10-year-old son, who described the experience as “more confusing” than the fire and tornado drills he has been through at school.

“He was calm. I was scared,” added his 8-year-old sister Lucy.

Eventually, officials told them there had been a shooting – though Kai Gudmestad said he had already figured that much out from Twitter.

The initial report of shots fired prompted lockdowns at the Capitol buildings and the White House. An email went out to Hill staffers warning them to keep sheltering in place but said, “No further gunshots being reported.”

The email continued: “One suspect is in custody, no further suspects appear to be at large, however the U.S. Capitol Police are continuing to investigate.”

After the shooting, the suspect was conscious and was in surgery, according to one official.

Both the House and Senate are in recess this week, so few, if any, lawmakers were present on Capitol Hill. But staffers are at work throughout the complex, and spring is an extremely popular season for tourists to visit.

Senate Judiciary Committee Chairman Charles Grassley (R-Iowa) said he was informed of the shooting ahead of a town hall meeting in Ocheyedan, Iowa, and was assured that his staff was safe. He said the shooting may have occurred outside the walls of the Capitol but only “about 100 feet from where people were murdered” in a shooting in 1998.

He said the incident does not cause him to worry more about safety on the Capitol grounds. “You have to think that the police are going to do everything they can to keep you safe,” Grassley said. “Nobody can guarantee you a risk-free society.”

People who were near the Capitol building were led elsewhere. At G and 2nd streets NE, a group of 80 high school students from California rested at a park after being moved from the Library of Congress. Tour group leaders said no reason was given, and there was no confusion or commotion, but that students learned the reason for the forced move within 30 seconds by checking news on their cellphones.

The White House also was placed on lockdown.

“The line was moving along, and then it just stopped,” said Mary Kusler, a top lobbyist for the National Education Association, who had already passed through the security check at the White House with her 4-year-old son and was heading toward the gates that open onto the South Lawn.

She said everything ground to a halt.

“I’ve done this so many times before, and I was thinking, okay, why is this line not moving? We were just standing there and everybody was feeling a little bit of anxiety, you could tell, because no one knew what was going on,” Kusler said. “But the volunteers handled it really well. They said, hey, there’s a bit of a thing going on, and everything’s going to be fine, so just relax. We were waiting for 30-40 minutes, and you kind of saw the Secret Service move about. And then they opened it up again.”

Shortly after the reported shooting, Secret Service Director Joseph Clancy stopped by the 15th Street entrance to the White House grounds to survey the security process and lines of families queuing.

Clancy told The Post that he was very pleased with the Secret Service agents for assisting in guiding visitors to the grounds and for providing a smooth and seamless security experience for families in light of the incident at the Capitol.