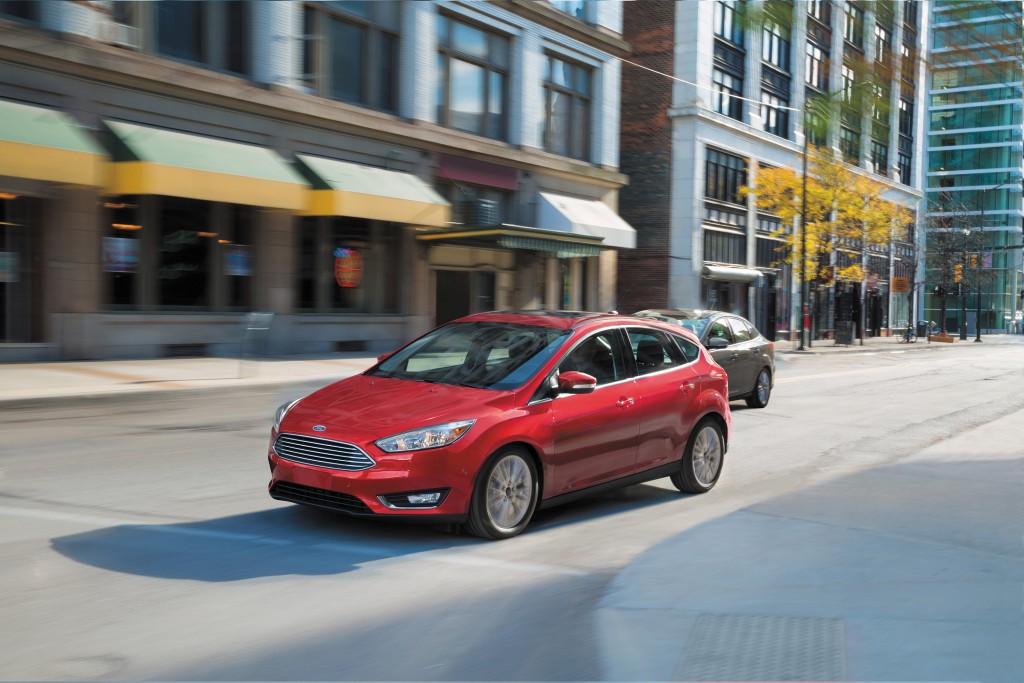 Though the Focus compact is one of the best-selling nameplates in the world behind the Toyota Corolla, Ford recently announced it will be adding four more crossovers to its global lineup by 2020, presumably including a subcompact crossover that will dwarf the Focus.

As the market shifts to crossovers, the compact hatch segment just got a lot more competitive for model year 2017, with the new Chevy Cruze hatch and the return of a Honda Civic hatch, both due in mid-2016.

Last redesigned for model-year 2012 and significantly refreshed for 2015, the Focus needs an injection of newness to stay relevant in the shrinking compact hatch segment.

The arrival of the Ford Focus RS, the much-anticipated AWD hot hatch with the Mustang’s EcoBoost engine, due on U.S. shores for the first time this spring, will provide excitement though not many sales.

For now, sales are left to the stale 2016 Focus. It retains its winning style, family of four roominess and balance of sporty handling with excellent fuel economy. But the $27,000 tag for the top-of-the-line Titanium trim is outpricing itself compared with the Mazda3, Volkswagen Golf, even the Toyota iM/Corolla hatch/whatever it will be called in the wake of Scion.

New for 2016 and on our test model was the Kona Blue tint coat, a striking color that looks like a metallic version of the blue oval itself. Also new was the 18-inch aluminum wheel package ($795) with all-season tires that helped provide grip to a front-wheel-drive hatch that really wants to squeeze in and out of corners.

The tester came with the proven four-cylinder engine paired to a pleasantly familiar six-speed automatic transmission. While the new EcoBoost is the fuel saver’s engine of choice, the GDI engine balances peppy bursts of speed and exceptional cruising fuel economy (38 mpg highway). I averaged about 34 mpg combined. The Mazda3 is a bit better with its balance of punchiness and economy, but the Focus interior is quieter, and feels roomier than the Mazda.

After weeks of CVTs and nine-speed or other fuel-optimizing transmissions, it was nice to have a reliable 6-speed that groaned when it needed to and shifted when I expected.

The engine was a little loud from the outside, but was muffled nicely on an inside that was swaddled in dark, soft-touch materials including leather seats, shifter and steering wheel. It’s a far cry from the budget compacts that many learned to drive in.

“Ugh. This screen,” said my 9-year-old passenger on first inspection. “I can tell already I’m not going to like it.”

Though my tech savant was quick to judge, he was right.

An improvement over MyFord Touch, the Sync 3 system of in-car connectivity features steering wheel controls for easy access to audio functions, supplemented by a volume dial and tuning arrows on the center stack. A floating “source” button on the center stack, set off by itself, never became natural to us in the week we had the car. The system falters on navigation, no matter whether you pinch or swipe the screen. The narrow, 7-inch screen (an 8-inch screen is available) makes it difficult to execute commands such as route plotting, and the zoom buttons can become lost in the map display.

In general, the more you have to use the touchscreen, the more distracting, dangerous and cumbersome the system. It’s not just the reach, as the screen is high and deep in the center stack, but the same type of fiddling that makes your phone toxic while driving can be said of touch screens.

On the plus side, the voice commands returned good fidelity, recognizing commands from me as well as my more demanding, pint-sized passengers.

Ford has finally updated Sync 3 to include Apple CarPlay and Android Auto on all 2017 models. The 2016 Focus comes with two smart-charging USB ports, which charge at twice the rate of previous versions, according to Ford. We didn’t notice.

The 9-year-old passenger did appreciate the green ambient lighting. His sister appreciated that we could fit her sports gear in the excellent 23.3 cubic feet in the hatch, while still having room for four people, although larger adults will feel stuffed into the back seats. The 60/40 split seats meant she didn’t have to ride with her hockey stick wedged from her feet to the roof.

Even though people prefer crossovers for a sense of higher (if not larger) space, there is still a place for the compact. Crossovers may be more utilitarian, but hatchbacks are sportier and more fun. Ford should celebrate that distinction on the Focus’s imminent redesign, and continue with the tech and safety upgrades.

Parting shot: Even a well-equipped Focus shouldn’t be more than $25,000.