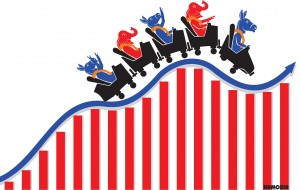 Tuesday’s primaries in five states will reshape, and could effectively end, the 2016 presidential nominating races. But the 2016 campaign has been too volatile to predict who will win as Florida, North Carolina, Missouri, Ohio and Illinois voters go to the polls.

Republicans long ago set up their calendar so a virtual winner would emerge Tuesday. The rules change this week: Florida and Ohio winners get all of those states’ convention delegates, a total of 165.

Tuesday could be the final day for Kasich, the governor of Ohio, and Rubio, a senator from Florida. If they do not win in their home states’ Republican primaries, they’re finished.

Trump has the edge in all five states. “People connect with him in ways they don’t connect with Cruz,” said Kent Redfield, professor emeritus of political science at the University of Illinois in Springfield.

Among Democrats, estimates show Clinton has twice as many delegates as Sanders, largely due to an advantage with superdelegates, party officials unbound by any state’s results. Polls show her ahead in all five states, but Sanders, a senator from Vermont, is close in Midwestern states.

Florida: Polls would suggest there’s not much suspense — Clinton and Trump have strong leads.

Trump, however, might be behind a trend in Florida’s early voting numbers. “We’re seeing a lot of voters on the Republican side who skipped the 2014 and 2012 elections,” said Daniel Smith, a professor at the University of Florida who has studied the data. “It’s hard to square that they are party establishment figures.”

Of the 850,000 Republican voters who have already voted, 42 percent didn’t vote in the 2012 presidential primary, Smith said.

Ohio: Kasich makes Ohio a state to watch. He has one of the highest approval ratings of any governor in the nation. His campaign is counting on an overwhelming victory, one that tells the nation that he’s the center-right candidate who can stop Trump and beat the Democrats.

Trump does well among the same constituencies that have embraced him elsewhere — voters with no college degrees or with lower incomes.

There’s another big reason to watch Ohio: Clinton. Her support for controversial trade deals hurt her in blue-collar Michigan, and Ohio is economically and demographically similar.

Illinois: Clinton, who grew up in suburban Chicago, and Trump are favorites. But the undercurrents of frustration with all things establishment are evident in the state, where manufacturing keeps eroding and urban racial tension simmers.

“Deep down most think Hillary Clinton is going to be the nominee,” said Alan Dunstan, Madison County board chairman and a Democrat. But Sanders has been attracting big, animated crowds, and “we hope he can bring that enthusiasm to her campaign.”

Republicans have a history of electing center-right candidates, and Kasich would seem a natural fit. So far, though, he hasn’t drawn support in Illinois, as he has devoted most of his campaign time lately to securing Ohio.

The sluggish economy as well as the fractured field keeps Trump the favorite, though he had to postpone his planned rally in Chicago Friday because protests raised safety concerns. That triggered even more criticism from rivals. “The seeds of division that Donald Trump has been sowing this whole campaign finally bore fruit, and it was ugly,” Kasich said.

North Carolina: Clinton and Trump are the presumptive leaders. Sanders hopes to pick up some delegates in the Democratic primary in the liberal mountain town of Asheville and in the state’s college towns. Friday, he spoke in downtown Raleigh, a short drive for students at Duke University in Durham, the University of North Carolina-Chapel Hill and N.C. State University in Raleigh.

Clinton, who began running media ads in North Carolina this week, spoke at a Thursday rally in Durham, historically a center for black-owned businesses and African-American political clout. African-Americans usually account for about 45 percent of the Democratic primary vote – an encouraging trend for Clinton, who has parlayed her popularity with black voters into landslide wins in Southern primaries.

Rubio and Kasich didn’t campaign in North Carolina, so it appears that Cruz will be Trump’s only threat in the state.

Missouri: It’s a classic conservative (Cruz) vs. the outsider (Trump) in the state.

This much is clear: Republicans are eager for change. Kristie Sikora, a St. Louis procurement officer, voted for Barack Obama eight years ago. “He promised hope and change,” she recalled, but didn’t deliver. Now, she says, Trump is making the same pledge.

The Democratic race appears to be tightening. One factor that might affect the vote is Obama’s unpopularity in the state.