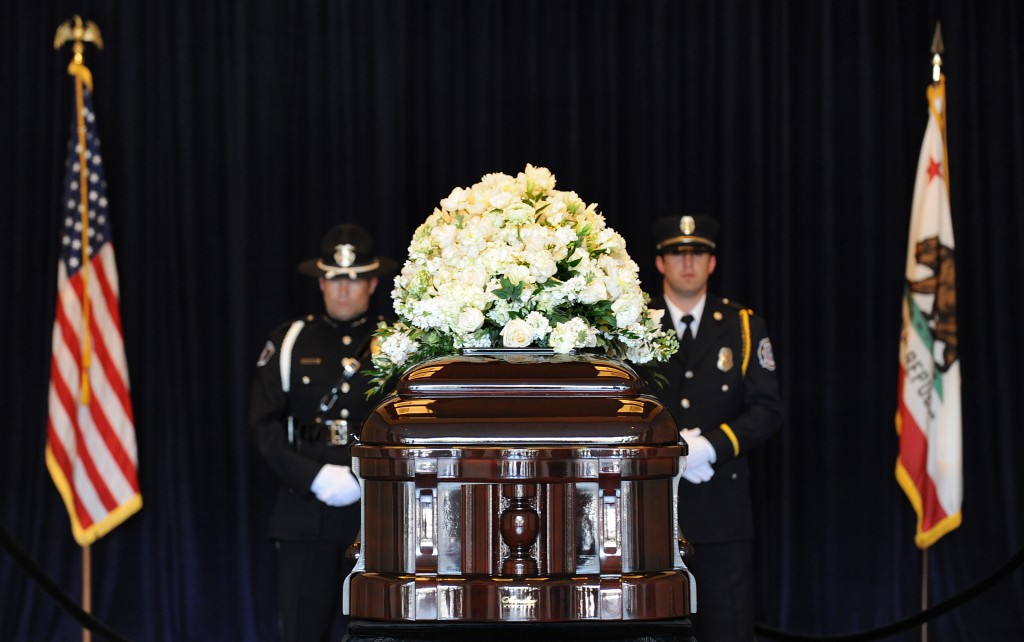 Roy Dillard drove more than 100 miles with two of his daughters and his 3-year-old great-granddaughter to pay their respects to Nancy Reagan and honor the legacy of what he called “the greatest president of my lifetime.”

They came to the Ronald Reagan Presidential Library, where the former first lady lay in repose Wednesday, the first of three days of mourning that conclude with Friday’s funeral. From quiet, tearful individuals to multigenerational families, more than 3,000 people passed by her casket in the first day of public viewing.

Dillard’s daughter Bobbie Eldridge said she admired how the first lady “stood by her man” always, even as he was suffering from Alzheimer’s disease. She and her 80-year-old father drove from Bakersfield to the library in Simi Valley.

“Ronald Reagan was one of the best presidents we’ve ever had,” Gruendyke said, “and I admired them both.”

Shuttles bused groups of mourners to take turns walking quietly in a circle around the casket covered in white roses and peonies — Nancy Reagan’s favorite flower. Most of the visitors were older, at least old enough to have lived through the Reagan years as adults, although some brought younger children.

Her two children, Patti Davis and Ronald Prescott Reagan, will be among the speakers at their mother’s funeral Friday, according to the Reagan Foundation.

James A. Baker, who served in President Reagan’s administration, and former NBC News anchor Tom Brokaw also will give remarks during the private ceremony officiated by the Rev. Stuart Kenworthy, vicar of Washington National Cathedral.

Wednesday began at a Santa Monica funeral home with a 45-mile motorcade that carried Nancy Reagan’s casket down an empty freeway lined with saluting firefighters and mourners holding hands over their hearts in tribute.

Reagan, who died Sunday at 94, will be laid to rest just inches from the president on a hillside tomb in the hills above Simi Valley, facing west toward the Pacific Ocean.

At the library, a military honor guard carried the casket between two identical towering portraits of the former first lady wearing a long, red dress and then past a gurgling courtyard fountain. The casket was placed in a lobby behind a bronze statue of a smiling Ronald Reagan holding a cowboy hat.

Attendees included the children of Ronald Reagan’s son Michael as well as Dennis Revell, the widower of the president’s late daughter Maureen. Michael Reagan, the president’s adopted son from his first marriage to Jane Wyman, is expected at Friday’s funeral.