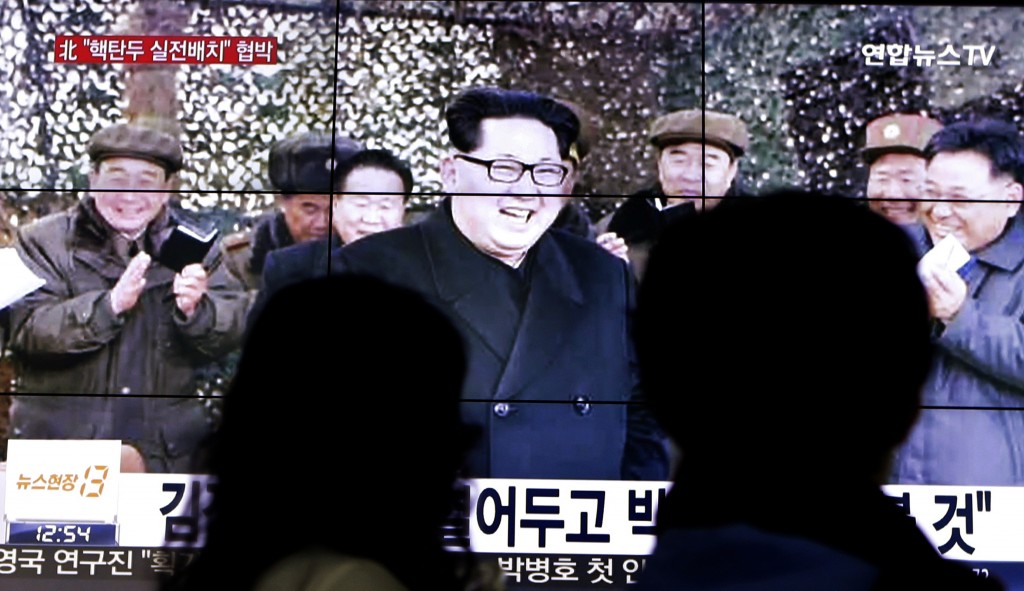 North Korean leader Kim Jong Un ordered his military to be ready to launch nuclear strikes at any time, state media reported Friday, an escalation in rhetoric targeting Seoul and Washington that may not reflect the country’s actual nuclear capacity.

The threats are part of the authoritarian government’s ramped-up propaganda push to signal strength at home and abroad in the face of what it portrays as an effort by South Korea and the United States to overthrow its leadership.

In North Korea’s first official response to the U.N.’s adoption of harsh sanctions over its recent nuclear test and long-range rocket launch, the North also warned Friday that it will bolster its nuclear arsenal and make unspecified “strong and merciless physical” measures. A government statement called the U.N. sanctions the “most heinous international criminal act” aimed at isolating and stifling the country.

“The only way for defending the sovereignty of our nation and its right to existence under the present extreme situation is to bolster up nuclear force both in quality and quantity,” the North’s official Korean Central News Agency said, paraphrasing Kim. It said Kim stressed “the need to get the nuclear warheads deployed for national defense always on standby so as to be fired any moment.”

North Korea has threatened nuclear war in the past, but it is unclear just how advanced the country’s nuclear program really is. It is thought to have a handful of crude atomic bombs, but there is considerable outside debate about the state of its arsenal.

Most experts say it’s highly unlikely that North Korea currently has a reliable intercontinental ballistic missile capable of reaching U.S. shores, let alone the ability to arm it with a miniaturized nuclear warhead. But North Korea can probably place nuclear warheads on its shorter-range Scuds and its 1,300-kilometer-range Rodong missiles, which can strike targets in South Korea and Japan, said Lee Choon Geun, an analyst from South Korea’s state-funded Science and Technology Policy Institute. Other analysts, however, question this.

Kim issued the nuclear threat while guiding the test-firing of a new large-caliber multiple launch rocket system, in a likely reference to six short-range projectiles that Seoul says North Korea fired on Thursday.

South Korea’s Defense Ministry said the projectiles, fired from the eastern coastal town of Wonsan, flew about 100 to 150 kilometers (60 to 90 miles) and landed in the sea. Ministry officials said they couldn’t confirm whether they were fired by the weapons system referred to by the North Korean news agency. The report did not say when the test-firing occurred.

Thursday’s firings were seen as a “low-level” response to the U.N. sanctions, with North Korea unlikely to launch any major provocation until its landmark ruling Workers’ Party convention in May, according to Yang Moo-jin, a professor at the University of North Korean Studies in Seoul.

The U.N. Security Council sanctions, the toughest of their kind in two decades, include mandatory inspections of cargo leaving and entering North Korea by land, sea or air; a ban on all sales or transfers of small arms and light weapons to the North; and the expulsion of North Korean diplomats who engage in “illicit activities.”

The North Korean statement described the sanctions as “nothing new” and “not that surprising.” Citizens of the capital, Pyongyang, interviewed by The Associated Press on Thursday said they believe their country can fight off any sanctions, in a reflection of official propaganda.

Recent commercial satellite imagery indicates new activity, possibly preparations for a rocket engine test, at a launch site where North Korea fired a long-range rocket on Feb. 6, according to an analysis by the North Korea-focused 38 North website.

The deployment of the Terminal High-Altitude Area Defense, or THAAD, is opposed by North Korea, China and Russia. Opponents say the system could help U.S. radar spot missiles in other countries as well.

The U.S. and South Korea are to kick off large war games next week that North Korea says are preparations for an invasion. South Korea is also taking a much harder line meant to squeeze North Korea’s government.

South Korean President Park Geun-hye said Thursday she will cooperate with the international community in trying to end North Korean “tyranny that suppresses the freedom and human rights” of its own people. She recently warned of North Korea’s future collapse, and South Korea’s National Assembly passed a human-rights bill that criticizes the North Korean government’s abysmal treatment of its citizens.

In January, North Korea conducted its fourth nuclear test, which it claimed was a hydrogen bomb. Last month, it put a satellite into orbit with a long-range rocket that the United Nations and others saw as a cover for a test of banned ballistic missile technology.