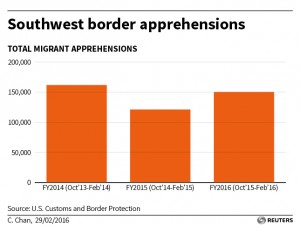 Gang violence and poverty have for years pushed Mexicans and Central Americans north to the United States, but recently a new driver has emerged: the anti-immigrant tone of leading Republican presidential candidate Donald Trump.

From the slums of Central America to close-knit migrant communities in U.S. cities, Trump’s rise to the front of the Republican pack has not gone unnoticed and is partly behind a spike in the numbers of migrants trying to enter the country, including children traveling without guardians.

Interviews with migrants, people smugglers and officials show many migrants are trying to cross now instead of facing tighter policing and new policies to halt illegal immigration if Trump or another Republican wins the Nov. 8 election.

U.S. Customs and Border Protection (CBP) data shows 150,304 migrants were detained trying to cross the U.S.-Mexico border between October and February, up 24 percent from the same period last year.

Similar data for “unaccompanied” child migrants — those traveling without a guardian — is not yet available, but between October and January, 20,455 kids were apprehended on the southwest border, up over 100 percent from a year ago.

The numbers of migrants typically rise as summer approaches.

Like other migrants, Franco is aware of the U.S. presidential race and Trump’s vow, matched by fellow Republican candidate Ted Cruz, to deport all the illegal immigrants in the United States, estimated at more than 11 million.

“You watch the news … There’s a lot of fear among Latinos,” said Isaias Franco, a 46-year-old from El Salvador who was deported from the United States late last year, adding that a Republican victory would spell the end for proposed reforms to give many immigrants greater legal security.

Hope Hicks, a spokeswoman for Trump, said migrants understand his policies. “It seems they agree Mr. Trump will be tough, build the wall and stop illegal immigration.”

Trump has built a strong lead in the race for the Republican nomination in part by taking a tough stance on immigration.

He says Mexico is “killing” the United States with cheap labor and has sent “criminals” across the border. He is also promising to build a huge border wall and proposed a temporary ban on Muslims entering the country.

Although Trump has been the most outspoken candidate, his main rivals also say the government must stop the flow of illegal migrants into the country, mainly from Mexico, El Salvador, Guatemala and Honduras.

In 2014, tens of thousands of child migrants traveling without family members overwhelmed the southern U.S. border, sparking a political crisis. The flow then fell in most of 2015 but has surged again in recent months.

Brenda Barrios, a 30-year-old Guatemalan based in Silver Spring, Maryland, crossed illegally into the United States in 2003 with her parents and two sisters.

Her parents were later deported back to Guatemala, and they think it is too dangerous to return but Brenda is encouraging them to come before the end of the year in case Trump wins.

“He’s one of the reasons why people are crossing the border. They think he looks like a dictator,” she said. “It’s very dangerous for them to cross. But it will be worse if Trump is president … Life will be very difficult for us. He doesn’t want us here.”

Still, Barrios and other migrants interviewed said the United States, even under an administration seeking to halt illegal immigration, would still be better than the poverty and violence of their home countries.

Since 2014, the murder rate in El Salvador has risen dramatically amid an escalation of gang violence and a regional drought has forced thousands of people, particularly from Guatemala, to head north.

But there are also signs that human smugglers, or “coyotes,” are taking advantage of the anti-immigrant rhetoric and peddling the idea that now is the time to go.

Victoria Cordova and her 11-year-old daughter Genesis were deported back to Honduras in 2014, after hiking through Mexico and being detained trying to cross into Texas.

She said coyotes in the Honduran capital Tegucigalpa — who charge about $7,000 per person — have been telling people now is the time to leave.