Business AUTO REVIEW: Visionary Volt Better Than Ever for 2016
Business 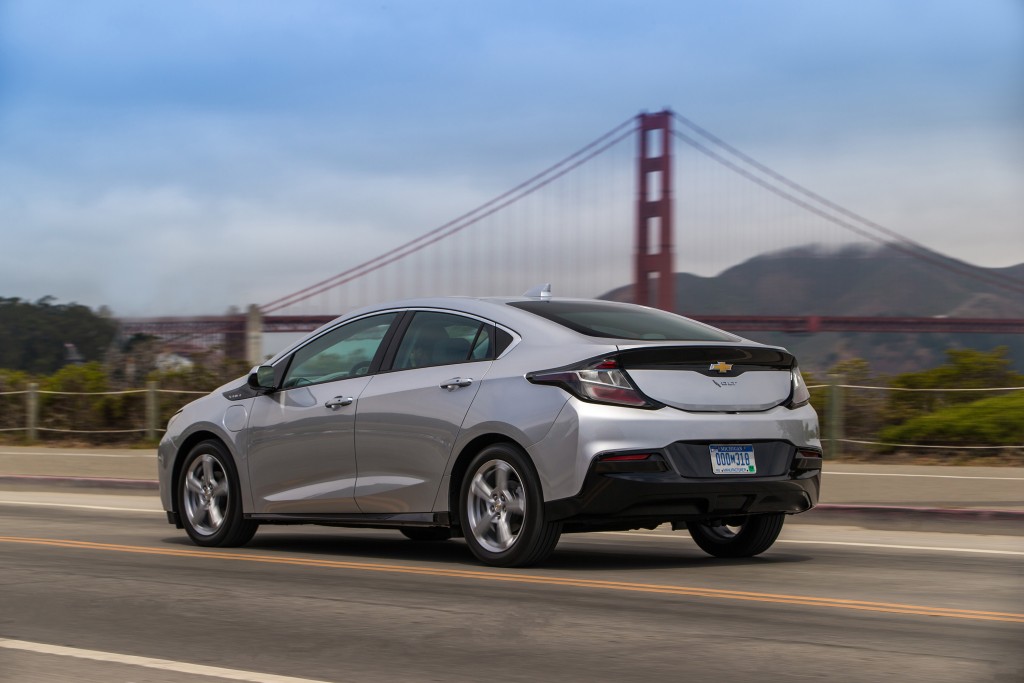 It’s hard to speak of the 2016 Chevrolet Volt without mentioning the 2011 model, which was unfairly tarnished by charges of being a product of “government motors.”

Conspiracy theorists won’t believe it, but the Volt was started by a pre-bankrupt General Motors under the Bush administration and was an attempt to leapfrog the Toyota Prius. Of course, cars like the Prius and Volt exist for one reason: the corporate average fuel economy standards that require automakers to achieve a 54.5-mpg fleet average by 2025.

And the Volt was, and is, visionary in concept, one that has survived its parent company’s bankruptcy, numerous CEOs and unremarkable sales.

Given that the 2016 Volt’s electric driveline travels 53 miles before a fossil fuel-powered engine steps in to extend the vehicle’s range to a maximum of 420 miles, it’s a product that fits in perfectly with the average American’s daily commute. In theory, you can run the Volt, take it home and plug it in, recharge it, and not use the gas engine for weeks. And even if you need to go the distance, a recharge is as close as your gas station. This is where the Volt holds an edge over other electrified vehicles. After all, pure electric vehicles still take some time to recharge; the Volt takes a couple minutes.

While the Volt’s system storage capacity has increased to 18.4 kilowatts, the number of cells has decreased from 288 to 192. In turn, the battery pack is 21 pounds lighter in a driveline that’s 100 pounds lighter. This gives the car strong acceleration; 0-30 mph takes 2.6 seconds. Reaching 60 mph takes a bit longer: 8.4 seconds. Still, there’s sufficient low-speed grunt for the cut and thrust of the daily boulevard Grand Prix.

Powering the Volt is a new aluminum-block, direct-injected 1.5-liter double-overhead-cam four-cylinder engine. It’s rated at 101 horsepower, up from the 84 horsepower generated by the previous model’s iron-block, port-injected 1.4-liter four. This leads to sparkling acceleration at lower speeds, and a combined fuel economy of 106 mpg equivalent in electric mode or 42 mpg in gas mode. In a more than 200 miles of driving, I averaged 117 mpg-e, 40 mpg in gas mode, and 50.3 combined gas and electric. Thankfully, unlike the previous model, the Volt takes regular unleaded, rather than premium.

If the Volt’s overall efficiency and range has been improved, so has its refinement. Unlike the first generation Volt, it’s hard to tell when the gas engine comes on; it’s that smooth and silent. That said, there is some road and tire noise. Notably, the regenerative brakes, which capture energy generated by braking, have a more natural feel than systems used on most hybrids.

The new Volt is built using GM’s Delta II architecture, which it shares with the new Chevrolet Cruze. The interior can conceivably hold five, but four is the more practical limit.

The instrument panel is much more conventional in appearance than the model it replaces and is dominated by dual digital 8-inch color displays, one in front of the driver, the other atop the center console. Beneath the console screen are conventional climate controls, which are a welcome change from the old car’s plastic capacitive switches.

Interior material quality is impressive, and the car has a solid, well-assembled feel.

The test car boasted two items every buyer should consider: heated seats and heated steering wheel. Given that blasting the heat can impact range, these items can help keep you warm while maintaining optimal fuel efficiency.

Spending time with the Volt lends insight into how great a solution the Volt is. Unlike with the Prius, most of the time you’ll never use gasoline. And when you finally do, you won’t use much.

Most folks have never given GM the credit it deserves for producing such a car, nor will they appreciate the technological know-how needed to achieve it. But GM has advanced the state of the art.

And while the Volt is simply a bridge technology to pure electric driving, such as the forthcoming all-electric Chevrolet Bolt, the 2016 Volt gives its owners peace of mind that a pure electric car never will. Not only will they will get to their destination without being stranded without power, they’re being environmentally sound as well.